Patti Morrow is the founder and editor of Luggage and Lipstick – a travel guide for baby boomer women adventurers, author of the book Girls Go Solo: Tips for Women Traveling Alone, and freelance travel writer with bylines in over 30 publications.

Let me introduce you to L’Estartit. Never heard of it?  I recently had the opportunity to travel in-and-about this picturesque town. This is the first of my series of my adventures throughout Costa Brava; I’m looking forward to revealing its surprises and hopefully encourage you to add L’Estartit and its surrounds to your “must-go” destinations list.

L’Estartit is a small fishing village in the Baix Empordà region, Girona province of Catalonia, Spain. The name dates back to 1517 when the blessing of the first chapel took place.

Until mid-twentieth century, the village consisted of the main street and the fishermen’s homes. Gradually fishing became obsolete and tourism began to get a foothold.

A good place to begin a visit to L’Estartit is at the Mediterranean Museum, hosted in one of the most historical old buildings in town. The museum is a plethora of both observational and participatory exhibits on the history, habitation, cultural, social and musical contributions through the region.

On certain occasions, the museum staff also prepares a buffet of local cuisine for sampling. I was fortunate enough to participate in such an event, sampling the local sweet and savoury sausages, tiny-but-tasty fish, hand-made breads and mouth-watering pastries, all washed down with local wine.

Given my irrepressible sweet-tooth, my favorite treat were the delectable small hand-made dough balls called “brunyols.” These treats, which appear to be of Arabic origin, are a type of doughnut but with a tighter texture and less sugared than American doughnuts.

Generally they are prepared and served only around Easter, so it was a privilege to have this on offer during my visit. (Author’s note: I did not indulge in half a dozen. That’s my story, and I’m sticking to it.)

The palace which sits atop the village hill was built in the 13th century by the Count of Empúries Ponç V who is speculated to be buried somewhere on the grounds.  The castle, which offers a grand, panoramic view of the village and distant mountains, was constructed in a square with a courtyard and six towers – one at each corner and two in the center of the castle walls.

Bellcaire was named a National Historical Monument by the Government of Catalonia. Every year, residents of the village take part the epic play Bandera de Catalunya, which is set in the castle.

In the village below Bellcaire Castle stand the remains of the Romanesque church of Sant Joan de Bellcaire, a national historical-artistic monument, built on a site where Roman remains have been found. It was the village church until the end of the seventeenth century, at which time the parish was transferred to the main castle.

Romanesque architecture is an architectural style of medieval Europe characterized by semi circular arches. The church was constructed approximately in the 6th century, with a basilica with three naves, the central nave covered with a barrel vault and the lateral vaults quarter circle. There are two horseshoe arches on each side supported by pillars. 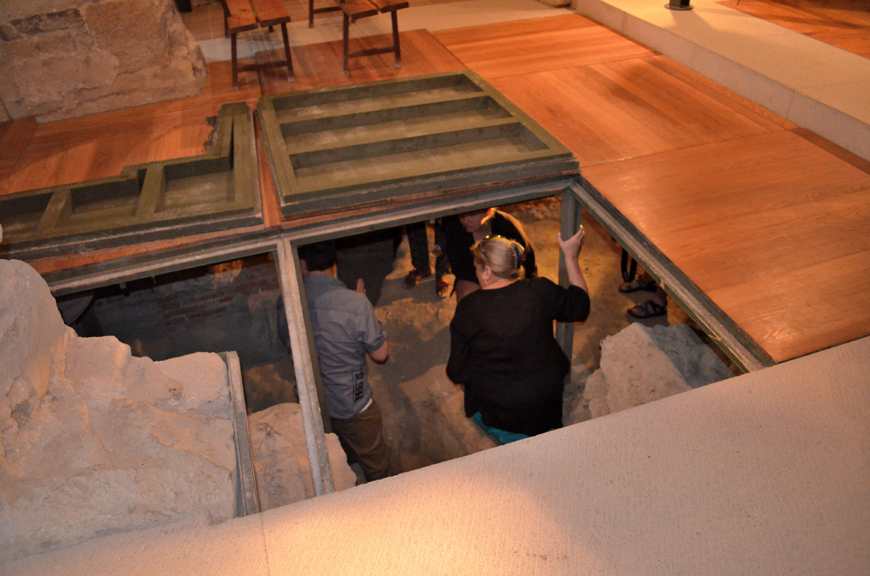 But the most fascinating aspect of the church was the discovery of the pre-Romanesque underground chamber over which the current church was built.  (Note: I’d be remiss if I did not give a big shout out to tour guide Nik Duserm — one of the most knowledgeable in the area, and hands-down the most entertaining guide I’ve ever encountered, anywhere.)

Just a mile from the coast of L’Estartit are the seven islets of Medes. The archipelago is formed by two major islands, Meda Grand and Meda Petita, and five craggy islets without land mass.

The islands became notorious during the Middle Ages, leaving underwater evidence of pirates and shipwrecks. The islands are popular with divers and snorkelers due to the abundance and variety of flora and fauna in the area. The preservation efforts of the last twenty years have done much to recuperate this marine reserve. 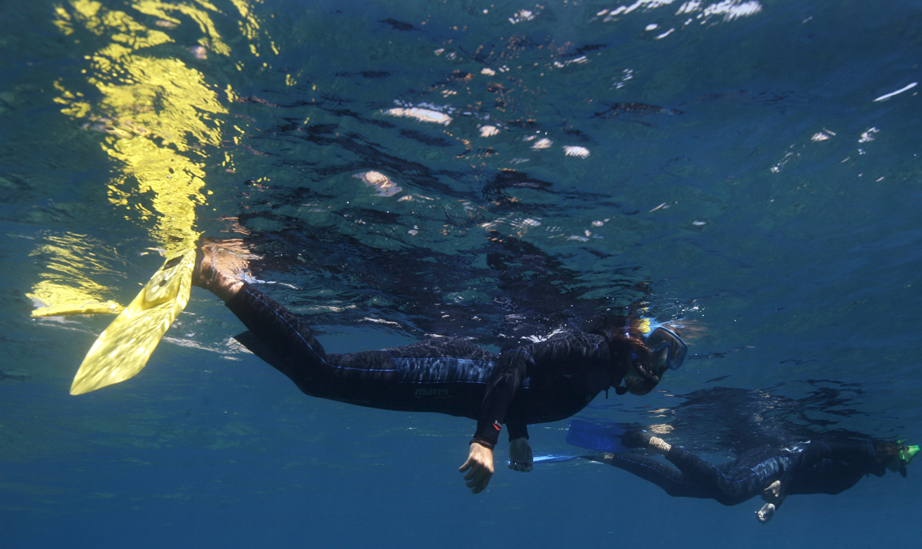 Sea fans, coral, octopus, starfish, barracudas and rays are all observable in this Mediterranean underworld. When I was there, we had the good fortunate to view two of the elusive mola mola (sunfish), a mother and baby.

Other activities include glass-bottom boats to the islands and kayaking around the rocky outcroppings. Trips to the islands depart from the modern marina in L’Estartit Bay. 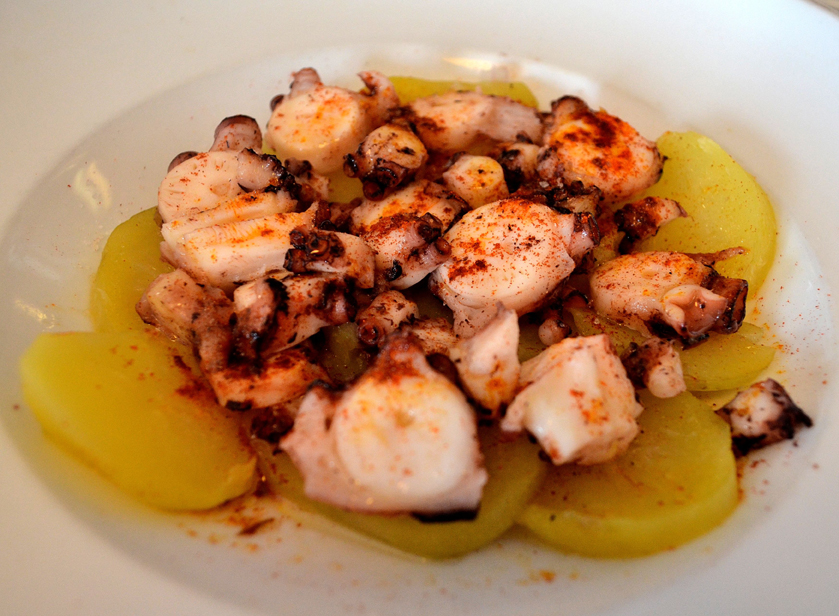 The local cuisine is something not to be missed. With treats from the land and the sea, the variety and sophistication are a source of local pride.

One establishment, La Gaviota, on the coast, stands out to me because it was the best food I’d eaten in all of my two weeks in Spain, not to mention the staff and owner , could not have been more friendly and attentive. Dining at La Gaviota is not just eating, it’s an entire experience unto itself.

There are several weekly markets in both L’Estartit and adjacent Montgri. Row after row of bustling stalls sell everything from organic fruits and vegetables, fresh caught fish, clothing and household goods. It’s easy to spend hours strolling from vendor to vendor and taking in everything the area has to offer. 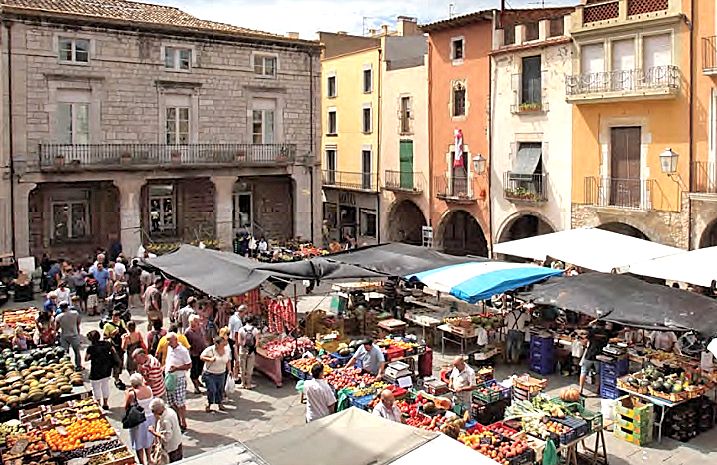 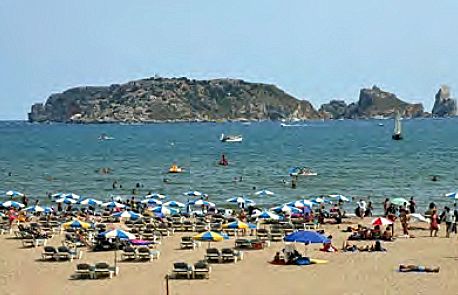 The main beach of L’Estartit is La Platja Gran, located in front of the residential part of town. The beach has shallow water and fine sand, watersports and playgrounds, making it a popular attraction for tourists and families.

Built between 1294 and 1301 by James II of Aragon, Montgri Castle stands sentry at the summit of Torroella de Montegri Mountain. The castle dominates the vista is the main distinctive landmark of Costa Brava, seen from as far away as Figueres.

The castle, which was never finished, was built in the Middle Eastern fortress style popular after the Crusades and is only reachable by a relatively difficult hike. The path is dry with loose stones, worthy of proper hiking footwear, and the zig-zag trail can be difficult to follow. However, the reward of stunning 360 degree panorama at the top – sometimes all the way to the distant Pyrenees – makes it worth the effort.

So now the secret is out. Oh well, it was bound to be revealed, so why not by me? L’Estartit in the Empordà is a relatively undiscovered gem whose beckoning shine is sure to attract many new visitors in the near future.