(written in 2008 so prices will have changed a little!) 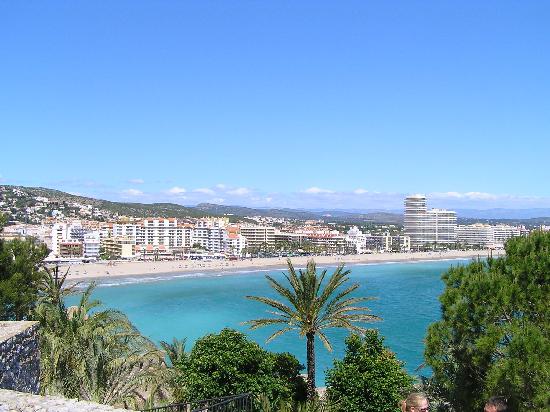 Last week we set off to sunny Spain (altogether now: Y Viva Espana – thank you) for a week in what turned out to be a very pleasant but indecisive resort which can’t make up its mind to be Alcoceber, Alcossebre or Alcocebre – it just depends on what sign you are looking at.

Situated between Tarragona and Valencia it has the merit of not having too many high rise developments.

From previous experience touring around the nearer bits of Spain like Figueres, Girona, Roses etc we were ready for uncommunicative, surly and rude service but actually found people to be much friendlier and the service very good.

Good things about Spain? Excellent roads, inexpensive beer (€1.50 for a 25cl glass) , some fascinating old towns once we went inland a bit, inexpensive beer, good value meals (the best being a 3 course lunch including a carafe of wine and a large bottle of mineral water for €12), rugged scenery, good beaches – oh and did I mention inexpensive beer? Just one gripe: why do the Spanish insist on getting credit card chits signed when one has already entered the PIN? It’s not even as if the signature is ever checked. I could have signed myself as Mickey Mouse for all the difference it would have made.

A nearby town made a good day’s visit – an excellent parrot park and a Knights Templar castle which we read was used in the filming of El Cid, and good restaurants The town rejoices under the name of Peniscola (no rude jokes please) which we realised was probably pen – iscola ie a peninsula. Eyebrows (only) were raised as we passed a local garden centre entitled Penis Verd. I understand the requirement for a good gardener to have green fingers, but this seemed a metaphor too far.

If you are ever in the area , do go to Morilla, an amazing town on a high rock (volcanic plug?) surmounted by a castle with a fine gothic church, an old convent, some impressively restored large houses and gothic arcades under which a market is held and various restaurants are to be found. The views from the castle are magnificent. Entry to the castle and the convent was only €2. It is too embarrassing to admit what it costs a tourist to get into Edinburgh Castle.

A most enjoyable week it was, but what a pleasant feeling of coming home as you pass the frontier and start the descent to the Roussillon plain.