Rasiguères and rosé – the alliteration is a fortunate coincidence for this village of vignerons.

Though the quality of the wine speaks for itself. Not too many caves can boast that their fame rests largely with their pink wine. But if you doubt this, pass by the caveau in the summer and observe number plates from around Europe, with drivers tasting and then packing their cars, to hang on to that summer memory in homes further north.

That’s not to confine the compliments to the rosé, as there are plenty of other decent wines, such as ‘Cuvée Moura Lympany’. 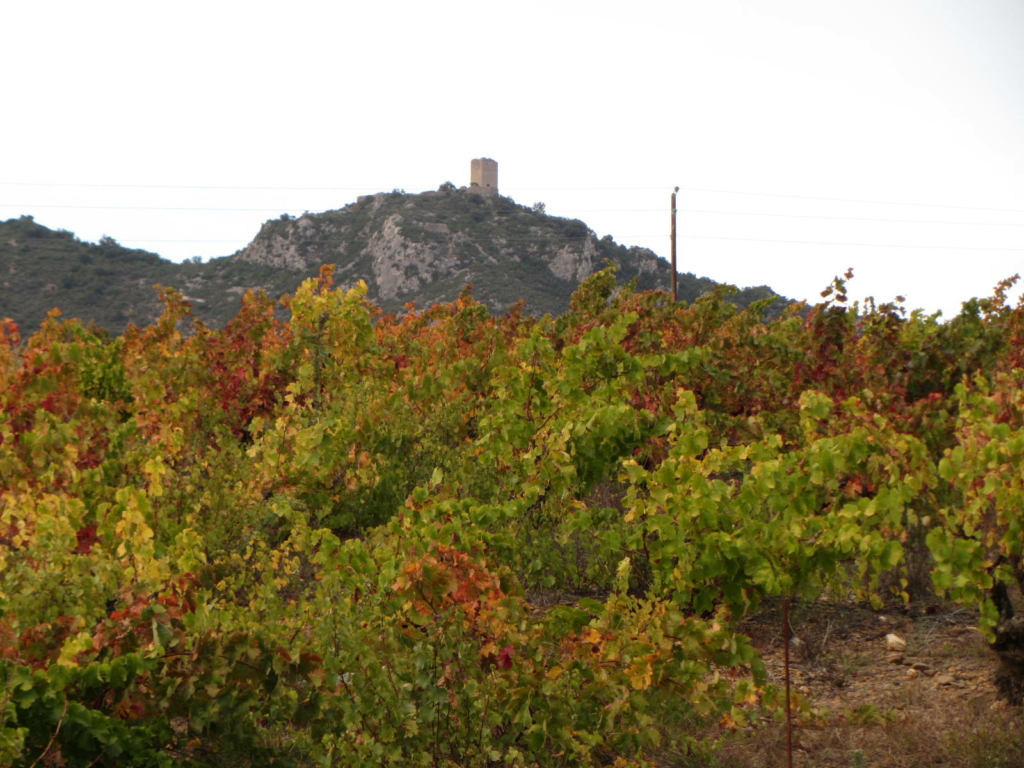 Dame Moura was a British concert pianist who performed internationally for decades. She was advised to seek a healthier climate than damp south-west England and landed up in this tiny village in the Fenouillèdes.

She and a resident of Rasiguéres dreamed up a great idea for a festival, which would bring classical music and entertainment to the village, and a blissful week with music, French food, wine and sun to the arriving Brits.

Manchester Camerata was appointed ‘house band’. and the band and its fans arrived by coach. It was described by Basil Howitt as ‘the most improbable coach party in the history of the world’ . He adds for good measure ‘it was undoubtedly – thank goodness – a barmy venture.’

Rasiguères residents rose to the challenge with gusto, offering their spare houses and preparing magnificent food.

Concerts featured the band and visiting soloists, and were followed by convivial meals and party-like celebrations.

It was a marvellously successful cooperation between villagers and visitors, some of whom liked it so much they bought houses there.

Moura’s last wishes were to be laid to rest here. Sadly after a glittering career, she died impoverished in 2005.

However the Musicians Benevolent Society funded a fitting departure and fans and friends came from all over the world to say farewell and drink a last toast of Cuvée Moura Lympany.

Her cherished concert grand piano remains in her erstwhile house.

Recently the Cave Coperative has celebrated 95 years of existence.

There are still 25 caves cooperatives in le 66 but Rasiguères occupies a special place as it was the first one to be created after the First World War.

The discussions that led to its emergence have been described beautifully and clearly by Louis Malet, who was president of the Cave from 1989-2012.

His semi-fictionalised account is intriguing and heart-warming in a way, because it tells of dissensions overcome to produce a common good. You can read the details in his book, published in 2015 ‘1919: la naissance des vignerons de Trémoine. (Presse Litteraire)

Briefly, in 1918, the village of about 300 souls welcomed back its menfolk, of whom some 21 did not return.

Their homeland … ‘terroir’… was in a bad state after 4 years of war. And remember it was really not so long since the dreaded phylloxera had wreaked havoc on this land of vines.

Despite the best efforts of the women to tend the vines, the caves were abandoned, buyers were ripping off the vignerons – all was in disarray.

Four men decided to take things in hand in order to revive the village economy. The main idea was to create a joint effort by combining vignerons’ produce. Not everyone agreed.

The village was cut in 2, between the clerics (the political Right) and the Socialists. The bishop of Perpignan was afraid the Cave would fall into the hands of the ‘Reds’!

In the summer of 1919, almost nothing else was talked about in the village square. Opinions were sharply divided, understandably. Those who owned good land wanted to keep it to themselves. Some who owned no land wished to participate in the venture.

Finally, objections were overcome and the ‘Vignerons de Trémoine’ saw the light of day. 12 members of the founding Committee were balanced as to their families and their politics, but no women were allowed on the committee.

The vignerons take their name from the ruined castle on a hill 4 km north of the village. It shares the shape of many similar local towers, built in the 13th century and now generally called ‘tours de guet’ – watchout towers.

They were built on vantage points which connected cross-country, that is, lighting a beacon in one would immediately alert others that trouble was on the horizon.

There is a point just outside Rasiguères where you can look straight at the Tour de Trémoine and see the Château de Quéribus between a gap in the hills.

For nature-lovers there are plenty of walks, and one can get up to the tower but  careful navigation is needed. At some points in the year, it is out of bounds due to nesting eagles.

In November 2014, the usually dry river bed passing through the village became flooded after several days of non-stop rain and the villagers saw a massive natural disaster befall them in a matter almost of minutes.

The water rose several metres, engulfed the Mairie and several houses and gardens nearby. Barriers and carparks around the area were wrecked and gardens were buried under mud.

Rasiguères was perhaps the worst affected but many other villages around the region suffered too and were classed as natural disaster zones. Today in 2016 the most obvious damage has been repaired but clearly scars are still left by such devastation.

The fabulous Fenouillède(s) ….. This lack of agreement on spelling is quite revealing.

And as often as ‘fabulous’ – you might hear  ‘forgotten Fenouillèdes’. I think this series of village portraits will convince readers that the Fenouillèdes deserves better.

Annie Pous, a 20th century historian and travel writer, commented that apparently the general public have relegated the Fenouillèdes into a category where ‘il n’y a rien’.

And in 1983, Fernand Estève of St. Paul wrote that this area of France is worth more than ‘l’oubli total dans lequel il paraît sombrer…’. .

Pierre Cantaloube (2011) searched a few dictionaries but found it omitted in several; oddly, as it has been part of France since 1258. He wonders if the various alternative spellings put the dictionary writers off including it – easier to miss it out than embark on a linguistic war!

A detailed entry can be found however in the ‘Gran Enciclopedia Catalana’ under Fenolleda, which was first mentioned in the year 842.

Geographically, this area lies west of Perpignan,  bordered on the north by the Corbières, the south by the Conflent, and east by the Aude.

Very often, even inhabitants of le 66 can’t place it, strangely, considering it numbers as many as 28 villages. I’ve often had to correct people confidently telling me that I live in the Corbières! .

Culturally, it’s quite a mishmash – Cantaloube says it belongs to Languedoc and Occitanie but its history is intimately tied in with that of Catalonia.

Tourism and encyclopaedias prefer places that are easier to pigeonhole, hence probably its low profile and understated charm. Peaceful countryside, abundant wild life and historical buildings are everywhere to be seen, and – having no Cathars or coastline  – it is generally overlooked by tourists. A bonus! CG