In another night of high tension and drama at the Aime’ Giral, USAP scraped home by four points against a competitive Toulouse outfit.

Even after Hooks magnificent, match winning, 45 meter drop goal in the 74th minute the home fans were subjected to wave after wave of concerted Toulouse attacks.

A superbly organised defence, with Hook, Strokosch and man of the match Purll to the fore kept the visitors at bay during a frantic last few minutes.

USAP again showed their attacking intent from the outset and in the 6th minute the brilliant Guitone scored his sixth try of the season with a magnificent individual effort.

He beat his opposite number for pace before chipping French international Poitrenaud and winning a foot race to score a spectacular try.

The crowd went mad. Grief, could USAP make it three wins on the trot against arguably Europe’s premier club. James Hook failed with the conversion but nailed three successful penalties to Luke McAlister’s two to make the half time score 14-6.

Immediately after half time Hook popped over another one and things were looking good.

One of the most significant factors was USAPs dominance at the scrum. Big Georgian Jgenti and local boy Guirado were making a real mess of the Toulouse front row. Every time the Toulouse scrum disintegrated the ‘’Bronca’’ roared its approval.

The scrummage is a huge source of pride to the Catalans and they have sadly missed the scrummaging power of another local lad Nicolas ‘’le Bus’’ Mas, who has moved on to Montpelier. Then, rather mysteriously, USAP coach Marc Delpoux substituted the whole front row with over 20 minutes to go and the complexion of the game changed. 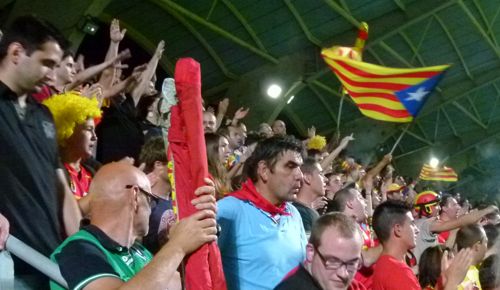 Massive Samoan prop Sextus John came on for the visitors and suddenly Toulouse were the dominant team in the scrummage.

The complexion of the game changed. Bezy scored a try, converted by McAlister, who also kicked a penalty.

The score was now was 17-16 to USAP, but Toulouse were ‘’throwing the kitchen sink’’ at them and another late defeat seemed inevitable.

Then up steps Monsieur Hook to win the match. The Australian Purll deservedly won the man of the match of the award. To quote L’independent  he was ‘’imperial’’ in the lineout. Not a huge man, but a real athlete, who has a great spring in his step.

A worrying sign is the interest of other clubs in two young USAP stars Guirado and Vahaamahina. They have both played for the national team and are a very important part of the clubs future. Let’s hope that the impressive new President Monsieur Riviere can ‘’bat off’’ the opposition.

The other Rugby a XV event of the weekend took place at the scenic Port Vendre stadium where COTES VERMEILLE beat PRADES by 16 points to 9.

This was a real ‘’blood and thunder’’ local derby, punctuated by bouts of fisticuffs which resulted in white and yellow cards.

The atmosphere was electric and a full ‘’tribune’’, included USAP players Camille Lopez and Romain Terrain. Clashes between the forwards were immensely physical and well organised. Three-quarter play was committed, but somewhat limited.

There were 700 spectators at the match. I must say I enjoyed it and would certainly go again.