The Fight against Bullfighting 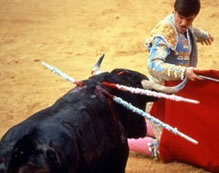 Bullfighting is a barbaric sport, a sort of throwback to Caligula’s Roman ‘Games’, which has absolutely no place in 21st century Europe, nor indeed in the present world, anywhere.

It started with slaughterhouse employees in Southern Spain ‘having fun’ goading and dodging terrified cattle before killing them. It was declared a national sport by Spanish Fascist dictator Franco. It is not a French tradition, despite and ‘absent-minded’ Culture Minister  allowing it to be declared ‘national heritage’!!!

Today, bulls are selectively bred and fed to be overweight and ‘impressive’, but weak on their legs, black (so ‘diabolical’), and yet they remain peaceful herbivores who will only fight to defend their lives or their herd (although of course they ‘spar’ with other bulls in the fields, as so many animals, to establish a hierarchy).

After being artificially exhausted, deprived of water, sometimes drugged, sometimes partly blinded with eye-drops, sometimes having the tips of their horns sawn (without anesthesia), all this to make them less dangerous to the ‘brave’ torero (or matador – killer in Spanish!), they have to be stirred into fighting by the ‘picadors’ who stab them with lances. This also partly paralyses them to prevent them from raising their heads to use their horns. They also have harpoons – ‘banderilles’ – hideously painful – stuck in their withers.

All this allows the torero to do a few pirouettes (pretty?) around the dying animal, before doing his best to finish him off ‘quickly’ – or sometimes very slowly – with a sword. If the dying animal still refuses to die, he is finished off by the ‘puntillero’, an assistant who cuts his spinal cord with a short dagger. Sometimes his ears and tail are cut off when he is not quite dead…

All good healthy fun – in a sea of blood!

Surveys show 70% of French citizens are against this cruelty, and cruelty towards animals is a crime in France…….. so how can this go on?

If you live in the P.O. (or one of the few other départements where it is allowed), your taxes are helping to subsidise bullfighting!

Please do all you can to fight against it, spread the word, contact local anti-corrida associations, demonstrate, write to your M.P., M.E.P….