AROUND THE TOUR DE FRANCE AND UP A HIDDEN VALLEY 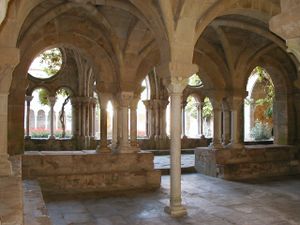 Yesterday, we set out again for a little trip.

We had promised to visit a friend in Luc-sur-Orbieu (Aude) who makes jewellery, to buy some beads for my handwork.

It was a lovely day, Languedoc at its best, as we headed down valley and up the motorway (La Catalane) towards Narbonne.

We were a little early for her opening times, but were quite happy to find a little bar somewhere, and to eat a salad before turning up at Lunes Boutique (www.lunes.moonfruit.com).

But even simple plans can go wrong.
After negotiating the Narbonne ring road safely, we headed up the D6113 towards Lézignan-Corbières.

Then, before the first roundabout, we ran into a traffic queue. We speculated on the cause, an accident, a fallen-over lorry, a safety check, but as we approached the roundabout, there were no fewer than 3 gendarmes wielding their whistles and sending most of the traffic back to Narbonne.

Just as we reached the first gendarme, a bright yellow truck with a loudspeaker shot around the other side of the roundabout, and headed off down the D613. Light dawned – we had run into the Tour de France. We had got the day wrong, thinking it would be around Montpellier. Oh dear!

The gendarme suggested that we try Moussan or St Marcel for a light bar lunch.

We turned obediently round and headed back to the Narbonne ring road, this time coming off on the D607, which led us to Moissan.

Moussan is a charming little Narbonnaise village, probably a circulade, with pretty houses, twisting streets and a restaurant.

But it was a little dearer than we had hoped so we set off again, going through the little villages and round the corners of the fields towards St Marcel, until we ran up again against the queues and blockages for the Tour de France.

We turned back again and explored further until we got to Cuxac d’Aude – again no bars or restaurants, except another rather chic little establishment, just gendarmes anxious to move us on.

At this point it was after one o’clock and we were getting a little anxious, but we drove on towards Coursan, crossing and re-crossing the Aude, the Canal de la Robine and the railway lines (there is a tourist railway line from Narbonne to Bize-Minervois).

At Coursan, we came out on to the main road (D609), which suddenly seemed familiar – as we had met some friends for lunch there the year before – and drove through another pretty, prosperous town – finding a “distributeur” on the way, but still on the hunt for lunch.

It was lovely country, green with the vines and waterside trees winding across the landscape, but baking in the July sun and I thought of Leconte de Lisle’s lines:

(Midday, king of summers, spread across the plain,
Falls in silver sheets from the heights of the blue sky.
All is silent. The air flames and burns breathlessly.
The land drowses in its fiery dress.)

We thought it was a delightful region, obviously prosperous, but mostly flat, and were glad we were not exposed to the sultry heat, and probably the winter winds across the plain, back at Caudies – although we do have the Tramontane.

Back towards Narbonne, resigned to our fate, thinking we would have to find a supermarket to eat in. However, we spotted a Routiers restaurant, La Petite Marmite, a few miles along the road.

There we lunched deliciously on stuffed tomatoes, pork chops with sauce madère and haricots verts, and tarte aux poires – for 13€. This was bliss – proper French food under a canopy, watching the trains go by on the nearby railway line and being served by a friendly waiter.

We left again at three and once again ventured on the Narbonne ring road. This time we got through the roundabout and went on towards Lézignan-Corbières.

It is an odd landscape, lots of little hills which look like moraines, with limestone outcroppings and scrubby garrigue vegetation. At the top of the pass (202m) which overlooks the plain of the lower Aude, we looked across the flat landscape where so much wine is produced, and which is punctuated by its great canals, before we turned left to Ornaisons and Luc-sur-Orbieu.

These were two charming little towns, with their alleys of plane trees and their curving streets, but we were happy to reach the Rue des Vignerons in Luc and to be greeted by the Milners and their delightful little two-year-old daughter.

After a useful hour picking over the beads, admiring the various craft objects on display (which were very attractive) and chatting with two people who were completely happy with the life they had built for themselves in France, we bought my beads and a bottle stopper with a ceramic top – resisting all other temptations – and headed off back towards Narbonne.

This time when we had passed Ornaisons we went on to Bizanet and followed the signs for the Abbey of Fontfroide.

The road (D234) twisted again through the funny little hills and past a huge quarry, but came out again on the D613 on the flat land near the A61 motorway.

Soon we came to a turning left which led into the little hills again. Suddenly we saw a car park, “obligatory for light vehicles”, and realised we had come upon the abbey.

It was, like all Cistercian abbeys, built in a “desert place”. The abbey was still hidden by trees, but we followed the signs into a charming courtyard where we waited for the start of the next guided visit.

There were audio guides in several languages for the non-French speakers, but the guide spoke a beautiful clear French and we decided to go with her commentary. A wise decision. She was well informed and able to debate the various architectural points raised by the transitional Romanesque/Gothic architecture.

This is a wonderful place. (www.fontfroide.com) Because the anti-clerical laws of 1901 demanded submission to the state, the Cistercian monks who had returned to the abbey following the French revolution, sold the abbey and removed to Spain.

After several years when it was in danger of being used as a quarry and robbed out totally, the abbey was rescued by a couple from Narbonne, Madeleine d’Andoque de Sériège and her husband, Gustave Fayet.

They were both cultivated art patrons and music lovers and they invited artists and painters to the Abbey, which they had made their home.

The family still lives there today and the Abbey is full of modern works which they introduced, such as stained glass, which filled the empty windows.

Some of the most interesting are the windows made with stained glass fragments rescued from the ruins of Rheims after the First World War.

There is an art gallery and a concert hall, which are in use every year. The restored capitals of the cloister and other carvings and the sympathetic use of modern wrought iron and of bronze, especially in the superb gates and in the well coverings, add to the pleasures of the abbey.

We will go again, but this time earlier in the day, so that we can have the extended tour of the abbey and have more time to enjoy the well-kept gardens and the extended walks offered around the site

We enjoyed our visit of nearly two hours, but were glad to reach the Agly valley again, even if we drove up valley against the sunset sky. A good day
© G. P. Williams 2009