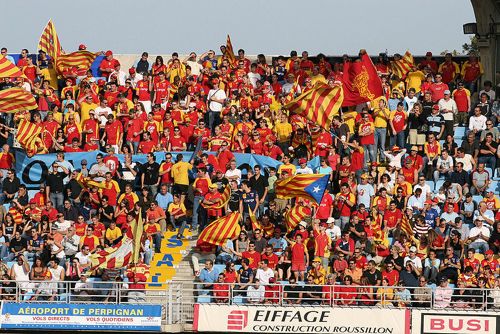 In another night of suspense and high drama the Catalan outfit were two points to the good against the visiting pink and black shirted Parisians. Had the score remained thus they would have gone to the top of the league.  Then, with just twenty seconds to go, the immaculate  Stade Francais out half, Jules Plisson, slotted his third drop goal of the evening to win the game. ‘’ Il a douché toute euphorie’’. The USAP fans were shell shocked.  Sport can be so cruel.

Sometimes it is not easy to find anything positive about such a ‘’gut wrenching’’ defeat  but one must give credit to USAP for their open, attractive, style of play which is the hallmark of their coach Marc Delpoux. They outscored the Parisians by three tries to one through Piukala, Guitone and Benvenuti, the latter following an excellent chip ahead by Hook. The visitors try was scored by Flanquart at a time when they were  down to only 14 men,  as a result of their French International, Pascal Papé,’ being ‘’sin binned’. They were well served by the returning Catalan Jerome Porical who slotted three penalties for a 9 point haul.

As always, there are recriminations after such a tight match. In the cafés on Sunday morning there was much talk of the weak USAP scrummage. The scrum has always been the source of Catalan pride, particularly with local boy Nicholas Mas in the team. But now that he has moved on to pastures new in Montpelier we are not the dominant force that we were. Others blamed the Captain, James Hook, for kicking to touch rather than going for goal late in the game. Overall, however he had a good game and slotted in well at outside half after Camille Lopez departure. He was successful with all of his five kicks at goal.

Despite the poor scrum both Taumalolo and Terrain were prominent in open play and Luke Narraway was intelligent, as always. Piukalas try was a brilliant solo effort and the elusive Guitoune, who took over from Hook at full back, was elected man of the match.

All is not lost. Amazingly, no team has won their first two games of the season and this promises to be the most closely contested Championship for years. USAP could do well to get the show back on the road with a win at Bayonne on Saturday and then have another home match against Grenoble on Wednesday the 4th of September.

It is all good fun. There were over 13,000 spectators on Saturday. Get down there and give them your support as well.