At last a coveted away win for the Catalans, against the once mighty Biarritz Olympique.

To put the matter into context the latter are on the slippery slope down to Division 2 and this was their 8th loss out of 9 starts in what is turning out to be a pretty disastrous season.

Nonetheless, this was a spirited performance from USAP, spearheaded by their young hooker and Captain Guillem Guirado who lead the charge both in attack and defence. There is no doubt that he will be badly missed if he moves on to pastures new.

With the score at 9 points to 6 to Biarritz, shortly after halftime, it looked like the Basque outfit were about to make their home advantage tell.

Then up stepped young Guirado. With the appearance and impact of a ‘’bull rhino, ’he smashed his way over for a crucial try. James Hook, who had already kicked two penalties slotted the conversion to make the score 13-9.

French International Dimitri Yachvilli brought the scores back to 13-12 on kicking his fourth penalty before Hook finished off the opposition with another long range penalty in the 71st minute.

The Welshman has already repaid the President, Monsieur Riviere for his confidence in signing him up for another three years.

Biarritz attacked with great conviction for the final few minutes but a spirited and extremely well organised USAP defence kept them out.

In addition to those already mentioned, Strokosch, Purll and Perez battled bravely for the Catalan cause. It is evident that a lot of good work has been done on defensive organisation and this has been a key factor in the last two victories. Long may this continue.

There is a big match in the European Cup, away to Gloucester next weekend and it is good news that second row talisman Luke Charteris will be returning after a very serious knee injury. But Gloucester away in the cup will be a tough proposition. 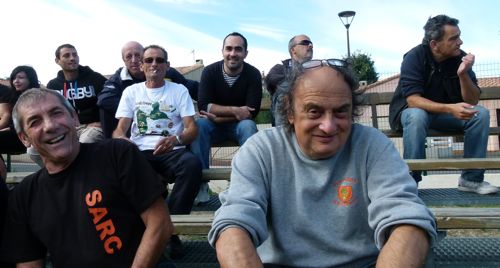 On the ‘’rugby du village’’ front, the SARC put in another impressive performance in front of a good crowd at the pretty riverside stadium at Sorède. Familiar features are the passionate crowd and the disappearance of the ball down the river, reminiscent of the old Arms Park and Gay Meadow. It is unlikely that a coracle will be required as per Shrewsbury but some young lads are doing quite well out of rolling their trouser legs up and fishing the ‘’ovalie’’ out. What will happen in the rainy season when the river is a raging torrent? The mind boggles. 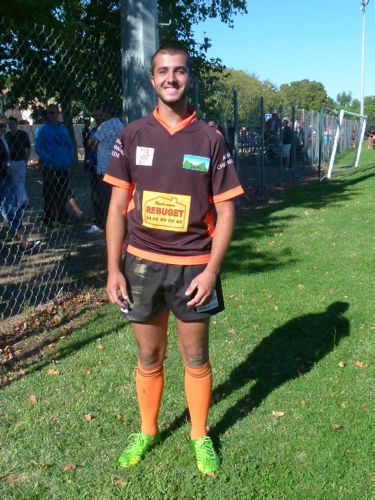 Anyway, it was a good match with both sides entering into the spirit of things and running the ball from all over the pitch. It ended up at two tries apiece but SARC took the honours because Remi Mira (pictured) slotted the two conversions, whilst his Millas counterpart had left his kicking boots at home.

For the Soredians Vivien Chevrey and Cedric Percherov scored tries. Young Chevreys try was a particularly impressive  solo effort. With a highly explosive turn of speed he sliced through the opposition like a ‘’rat up a drainpipe’’, before touching down under the posts. He also tackles like a demon, despite the fact that he is not in the Jamie Roberts mould of centres.

A really enjoyable Sunday afternoon finished off with an ‘’Après Match’’ celebration. Get down there for the next match – 2 weeks’ time I think?