Allow 5 ½ hours including stops to take in scenery. Take a headtorch if you decide not to go to the Puig de Sallfort as the alternative route back to Le Rimbau passes through a tunnel in the rock.
Access: map IGN 1:25000 Banyuls Col de Perthus Cote Vermeille 2549OT

Start of Walk: Take the N114 south and exit for Collioure centre(14) but instead of turning right towards Collioure take the D86 signed to Le Rimbau and Tour Madeloc.

After a few zig zags up this road take the right turn to Le Rimbau on a bend. This narrow road has passing places and ends in the hamlet. Some parking is available on the roadside just before the village.

The Walk: Take road to right of 30 sign, “Roches d’Escalade” and drop down to cross the river below the village. Both path and river are still eroded from November 2014 storms and the bridge has disappeared so cross only when river is low.

Turn right through gate into pasture and pick up yellow way marked route up the hill towards the Roches d’Escalade.

Path bends left at the Roches and the next part of the route takes you onward and upwards towards a pylon, which you can see from this vantage point. Great views already to Le Madeloc and La Massane.

Here the clearly marked path goes off to the right, contouring along the mountainside before turning uphill again to reach the Col de la Placa d’Armes. A right turn here will take you to La Tour de Massane but our route goes left towards Le Puig de Sallfort. The sign says Col d’en Verderol, which is en route for Sallfort.

Follow the way marked route through the rocks, and into trees, passing a stone Refuge on your left. There will be a fence below on the right for most of the 1.5 kilometres to the Col and the top of the ridge to your left

Watch out for mountain bikers!!

The path can be a little indistinct but keep your eyes open for the yellow markers and where the path divides as it comes closer to the top of the ridge, take the left fork, heading towards some rocks.

A few hundred metres after the Col reach a cross road of paths. Here there is a sign to Le Rimbau which is the path on the left. (If you decide not to continue to Puig de Sallfort take this route back. The path descends and passes through a tunnel then on down to a fountain before meeting the GR10 lower down the valley side).

To reach the summit of Le Puig de Sallfort there is no way marking, or even a clear path. Just strike up steeply through the trees to emerge on a grassy area with triangular- shaped holly bushes, presumably tailored by the winds!? 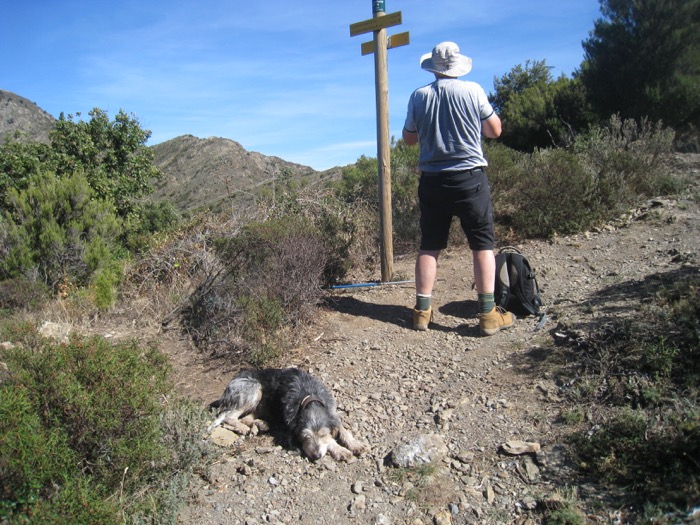 There are a series of rocky outcrops on the top of the peak and a cross off to one side. The GR 10 crosses the summit.

After taking in the wonderful 360 o views drop down to the GR10 and follow its red and white markings down the rocky path to eventually meet the alternative path mentioned above, which joins it on the side of the valley.

Contour the side of the valley for a considerable distance until reaching a path leaving the GR on the left to drop down to a Citerne (large green water holder). Here meet a double track which will take you down the long valley and back to Le Rimbau.

As has happened before, we had a local “guide” on this walk in the form of a dog from the village who accompanied us for the whole length of the route!! We now always make sure we have enough water for a dog with us!