How to get to Céret 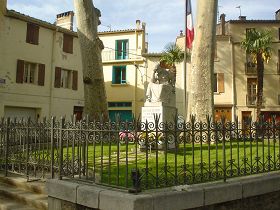 Assuming Perpignan as a central point, head towards Le Boulou and from there, take direction Céret.

If you are coming from Perpignan on the motorway, Le Boulou is a well signposted exit (just before Spain) and you should turn right towards Ceret at the roundabout after the péage (tolls)

However, if you are coming from Perpignan direction on the main road you will no longer need to cross Le Boulou centre, which was notorious in the area for traffic bottleneck, as it now has a long awaited by-pass to Céret, also well signposted

Walk 1 in the Cérét region – A pleasant stroll

Level: EASY This walk is entirely flat, takes you through vines and cherry orchards and is mainly on small roads or off-road.
Time: about 45 mins
Recommended for: Anybody. Not taxing in any way so perfect for older walkers or walkers who lack confidence, as well as dogs and children!!
Where to park
Approaching Céret, on the road from the Le Boulou by-pass, you will pass St Jean Pla de Corts on your left. A little further on, on the right, there is a large white building, once a champagne ’cave’ but now mostly abandoned, but with a small antique shop at the front. Look out for a large sculpture at the front which looks like an ear, or maybe a cork, an alien, a corkscrew……

The walk
Park in front of the sculpture and start your walk along the small road back  in the direction of Le Boulou, with the white building on your left.

Carry on ignoring all other tracks and roads, until you are parallel with the abandoned railway track on your right and take one of the cleared paths up on to the track. Walk along the track a short distance until you come to an opening in the hedge on the left.

Turn into this opening and directly right. You should now have vines

Carry straight on until you arrive at a small road and turn left onto a track. Follow this round to the left, with superb views of the Canigou in the distance.

Continue straight on until the track turns to the right. Continue to the end and turn left. Follow this track which takes you round to the right and up a small uneven slope, the only part of the walk which may involve a little effort, turning to the left.

After the road to the Chateau (on the right) take the first track on the left and you will arrive back at the ear!

A fairly well indicated circuit, with orange paint strokes at strategic points along the route, which starts and finishes in Ceret centre.
Level: Some quite steep uphill climbs at the beginning. Difficult in parts but worth it for the views.
Time: 1h15
Recommended for: anybody who can cope with about a kilometre of uphill track. Particularly good for walking dogs or children as all off-road or small roads with very little traffic. (apart from the very beginning which takes you up to the start of the walk) 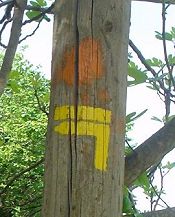 Where to park
In high season, it is not always easy to find a parking spot in Céret, although there are plenty of free car parks. If able, park in the Place de la Liberté in the centre (see top photo) from where  the directions begin.

The walk
From the Place de la Liberté follow the signs for La Terasse au Soleil, former hotel now closed, which will take you up the Rue des Evadés.

Follow the road round to the right, then left at the signpost for Fontfrede Las Illas.

Turn left onto Rue Edmond Brazes and right at the top of this road. There, you will see a sign for Le Ventous.

Take the path which will lead you up a narrow, stony track and bring you out in the car park of La Cerisaie.

Cross the road onto another track signposted Las Castagnedes. Carry on down this track until you come to yellow and orange paint strokes on the left. 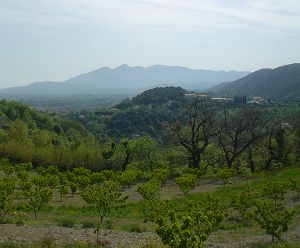 Take this track on the left, and follow it through, parallel with the road on the right, along a narrow path which will bring you out at some houses.

Turn directly right onto the road and straight on until the road curves round to the left and becomes track.

Follow this track which curves round to the right, passing a wooden hut on the right. Keep right at the fork directly after the hut.

Carry on along this track until you come to a broken down wooden hut on the left. Turn right here, past a tyre on your right with orange paint strokes to indicate the route. The track sweeps round to the right. 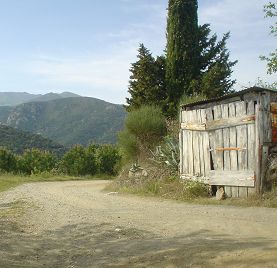 straight on along this track, with panoramic views of Céret on your right.

When the track arrives at a fork, take the smaller, narrow path on your right and follow the stony descente which narrows as it passes a house on the right and comes out on somebody’s driveway!

Go straight across the drive and down some steps, across the canal and down onto the road. Turn left on the road and carry on until you come to a new estate of houses and flats.

Turn right here and follow the road down into Céret. At the car park at the bottom, turn right and you are back in La Place de la Liberté