Did you know that Catalonia was allegedly unified by Wilfred the Hairy (El Pelut) from Prades, Count of Barcelona, Cerdenya, and Girona, whose titles were bestowed upon him by Charles the Bald and his son Louis the Stammerer? Yes, really.

But that story, his founding  of an independent Catalonia, is for another day. Today we look  at one of the legends which surround him – the creating of the Catalan coat of arms and flag.

King Charles the Bald, (Charles II le Chauve) son of Emperor Louis the Pious and grandson of Charlemagne, was apparently not really bald. In fact, it is believed that he was actually quite a hairy chap! On the other hand, our Wilfred the Hairy, subject of the title, was not known to be particularly hairy. Strange indeed.

When Charles the Bald ordered the assassination of Wilfred the Hairy’s father, Sunifred 1st, legend has it that the hairy one avenged his Dad’s death by challenging the assassin, Salomon, Count of Roussillon, (no hairy nickname provided) to a duel on the Cerdagne Plateau and killing him. 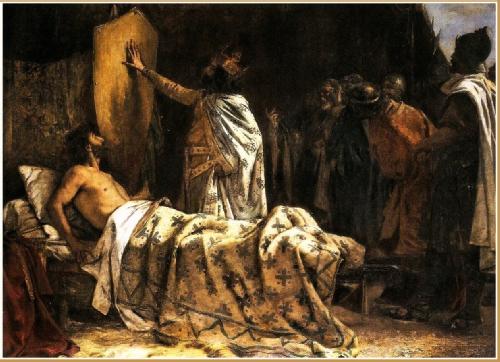 Wounded himself, he is said to have dipped his hand in his own blood, and traced 4 bloody stripes on the surface of his golden shield.

Et voilà – the Catalan coat of arms and flag, la Senyera, was born!

Believed be one of the oldest flags in the world, a less romantic origin suggests that in 1068 Sanche Ramirez, king of Aragon, was given the title ‘gonfalonnier’ (standard bearer) to the Pope in return for placing himself and his land in the Pope’s care, giving him the right to wear the Pope’s colours, red and yellow representing blood and gold.