Strange kind of weather to herald in December. It was actually quite warm yesterday, but with low cloud so it felt as if it was drizzling some of the time. Quite decent ’eclats’ of sunshine made the day feel mostly fine. This morning, it was dry, not too cold, but cloud cover was blocking the feeble attempts of le soleil to break through. Then KAPOW! It battered its way past the fluffy villains and we had blue skies and blinding sunshine most of the afternoon.
What a great place to be middle aged! Nobody can see the lines round my eyes, the deputy dawg jowel, or the pendulous tortoise style double chins…… cos the sun’s too bright. Yeeeeee haw! 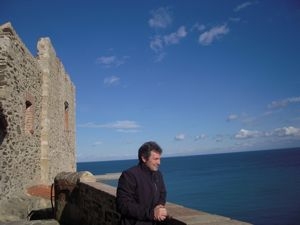 Another beautiful day in the P-O – blue and gold. Last week’s snow has melted from the Albères (view looking towards Sorède) The sun is melting a light ground frost, and streaming in through my office window, forcing me to pull down the blinds, and I cant help feeling high. It’s two weeks to Christmas and I’m being blinded by a warming sun and lifted by bright blue skies.

Isn’t it funny how we have and expect so much in our western world, are never truly satisfied, are always trying to save or make more money, get wound up, stressed and irritable today over things that will be so unimportant tomorrow, and easily forget the really important things in life like good health, a blue sky, a ray of sunshine……

We went to the Christmas market at the Château Royal in Collioure last weekend. We don’t go to Collioure often as it’s a bit too touristy in season. 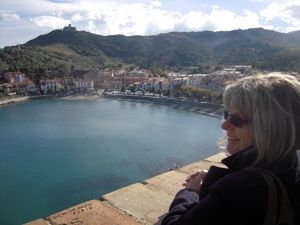 Overworked, underpaid and harassed staff in some of the cafés and restaurants, problems parking, crowded streets….. it all means that we forget to go there out of season, when the hordes have left and the small jewel of a town has settled back down into the pretty seaside resort so prized by artists, both past and present. Many believe that the Château Royal was actually built by the Knights Templar at the beginning of the 11th century but apparently that’s not true, although they did have quarters there. As soon as I hear that name I immediately thing Da Vinci Code, intrigue, hidden passages and secret parchments. The Knights templar or ‘templiers’ were originally a group of warrior monks founded to protect the highways and byways and keep them safe , particularly for pilgrims. They took vows of poverty and chastity but nevertheless became very powerful in a very short period of time, as the excitement and heroic aura which surrounded them attracted many rich, high born lords, who gave up all their possessions to the order, according to the vow of poverty and communal sharing! The château itself is superb, built at the same time as the Palais Royal in Perpignan, with Collioure village clustered around it. It was occupied by the Royal family of Aragon until 1642 when the French re-conquered Collioure, the musketeers led by the legendary d’Artagnan. With walls plunging into the sea, imposing and grand, it is now owned by the General Council of the Pyrenees Orientales, and, exhibitions, festivals, and of course markets are held within its ancient walls.The views from the ramparts are stunning, and is was fascinating to wander around the courtyard areas with mysterious staircases leading up to turrets, and fascinating rooms of all shapes and sizes. 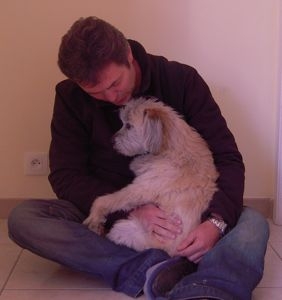 Bisou, her Very Royal Hairiness, continues to defy the vet’s prediction of not seeing Christmas through, in the same way that she wagged her way through summer, despite buckets of tablets and daily injections. If it were possible to survive on love alone, she would be around for a thousand years. Olivier is unable to walk past her without getting down on the floor and cuddling her, and every time he approaches her you can just see her thinking…”Uh oh. Here we go again. I’m going to be scooped up and squeezed tight for the next ten minutes” It also gives Olivier a bit of chance for a quick and illegal nap, and I have found him curled up on the rug, fast asleep several time, with the dog long gone and licking her bottom happily in a far corner. As for the other, unmentioned member of the family. He is 18. No need to say more!

I doubt the sun will pierce the heavy cloud cover today, though it is quite windy so the wind may chase away the cloud. We had a little bit of rain yesterday, but mainly the weather has been fine and dry, perfect weather for cycling and walking, with clear skies, getting up to 16° – 17° in the sunshine, but very cold some mornings and evenings. Exactly the kind of weather we love. Unfortunately, we’ve not been able to do much as we have Papa staying with us, and he took a nasty tumble at the weekend, resulting in two black eyes, bloody nose, badly bruised ribs, and cuts and scrapes all over. As he is no longer a spring chicken, it was also a big shock for him (and us) and has been the only topic of conversation all week. We have had to cancel Christmas, which was to be spent in Paris with Olivier’s family, so if anyone has a spare turkey leg, stick it in the post, as it’s just going to be burgers and beer around the sick bed this year for us. Have I squeezed the sympathy vote dry yet? On the silver lining of the cloud side, dear Papa doesn’t like to be left alone and gets into a bit of a panic if there is nobody else around, so we have not been able to buy any presents this year for anyone…….. an enormous saving in both time and euros. To anybody reading this, I wish you with all my heart a fantastic Christmas, as lively or as calm as you want it to be, and may I take this occasion to remind you that if you are giving up chocolate or alcohol for the New Year, sling it over this way cos I have no intention of giving anything up!

I have a new photo on the home page of the site, but talk about blood, sweat and tears to produce it! I seem to have arrived at an age when even Photoshop can’t do the job. I danced around in front of the camera for an hour or so, arms up, legs out, head back or side, big grin, secretive Mona Lisa smile, surprised eyes, sexy eyes, giggling, laughing……. I felt great, like a photographer’s model – but every photo when it came to choosing ’the one’, showed a short, fat, double chinned, middle-aged woman, with eye bags, saggy jowell and beer belly! I cut off all the body parts, which vastly improved the whole, chose one where my chin was in shadow, and took a look at it without my glasses. Big improvement! My New Year snippet of advice? If you don’t like what you see, take of your glasses – it will look so much better. Of course, if you don’t wear glasses in the first place, you have problems, so your New Year resolution should be to go out and get some glasses, so that you have the pleasure of taking them off and seeing yourself in a better light.

Talking of middle aged women, guess what I got for Christmas from my usually sober and sensible husband? A Wii! Yes, yes, I did! (You might have already guessed from the photos of course!) It hasn’t been an easy couple of weeks as Le Papa likes non-stop action, outings and entertainment when he is well, but when he is not well, he still insists on coming with us everywhere, but has to come home once we get wherever we are going, as the body is less willing than the spirit! However, the WII has provided hours of hilarity (we even got Pop to forget about his bruised ribs on Christmas Day and jump on) and Olivier and I have already spent many happy hours bending and girating. Good exercise when you’re stuck in the house, great fun when you’re desperate for a giggle.. brill. For those of you who are scratching bits of your body and wondering what I’m taking about, a Wii (pronounced wee) is “a home video game console, focusing on a new form of player interaction handheld pointing device which detects movement in three dimensions” (Wikipedia). Good to be reminded that the outside shell may be wrinkling, inflating, sagging and shrinking – but the inside remains as young, silly and immature as the head thinks it is when it hasn’t got its glasses on!

The weather has remained mostly dry, plenty of sunshine and crisp bright days, and Christmas has provided some great walking possibilities for those able to head off for the coast or mountains. We are so lucky to live here, and sometimes when I forget and go into Moaning Minnie Mode, all that I have to do is look at the view out of my office window, and it is enough to pick me up.

HAPPY, HEALTHY AND LUCKY NEW YEAR. LETS HOPE 2011 BRING SOMETHING SPECIAL TO US ALL. (and if anyone knows of a lady in her 80s who is looking for a boyfriend/companion, please let me know ASAP)