The weather has been ’interesting’ over the past week. Windy, chilly but bright and sunny – too warm with the heating on, too cold with the heating off…. If I was writing a school report on it, I would probably say ’Satisfactory but could make more effort’! Right now, the sun is shining, the wind has dropped and the morning is bright and fairly chilly, great walking weather. 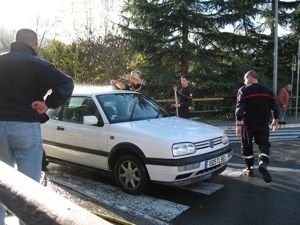 Olivier has decreed that my lovely little Golf convertible, one of the loves of my life for the past twenty years, is on her last wheels and will soon be on her way to that great scrap heap in the sky. You know what it’s like when you know someone is right but don’t want them to be? So sad.

Here is a photo of her having her yearly wash at the Maureillas Telethon last December. Isn’t she a cracker? How can I go through with it? On the other hand, although she still LOOKS like a cutie, she is becoming a little unreliable on the mechanical front, and being somebody who only recognises cars by their colour, and has no idea where the oil goes, or how to blow up the tyres, I have finally bowed my head and given in. (sniff)

We’ve been looking for new (second hand) cars for the past couple of weeks. Not a disagreeable task you might think. A wander around the garages, lunch out in Perpignan, a little bit of negotiation, wheeling and dealing et voilà! Le chat est dans le sac!!! Mais non, mais non. Everything is soooooo much more complicated when you’re a short legged creature.

So this was the plan. We don’t need two cars anymore as we go everywhere together outside work, and for that Olivier has the van, so we decided to sell Olivier’s car, give mine away (double sniff) and buy one car to suit us both. Easy peasy non?

I can’t reach the pedals on the racy kind of cars that Olivier likes, and have had to rule out low cars, long cars, big cars, wide cars, deep cars….and believe me we have tried them all, over nearly two weeks of daily treks around all the car dealerships and nightly trawls through the private sales on the Bon Coin, La Centrale..

But wait….. there is another much bigger problem. I have never driven a left hand drive car!! Yes I know. Ridiculous considering I’ve lived half my life in France, but I have always had my English car with me!! I am a left hand drive virgin, terrified of ending up in a ditch or the canal d’arrosage when I misjudge the width of my shiny new car. And I will so miss fooling the police at breathalyser time, ass recorded in one of my first blog entries in 2005….

Yesterday morning, I got breathalised! Pulling into Gifi carpark on the outskirts of Le Boulou, to look at some of their classy pool accessories (4€ for a lilo but you get what you pay for) the ’Gendarmerie Nationale’ were out in force. I believe that it was much to do with the festa major (three days of festivities over the weekend) which must have meant that a large percentage of locals and tourists alike, were still driving around the next morning with blood in their alcohol! Anyway, once the gendarme had cleverly assessed that 12 year old Lulu was not the driver, and had made his way round to the other side of the car (we are 66 registered but still right hand drive in order to confuse the police!) the conversation started off like this.
Gendarme: Bonjour (unsmiling)
Kate: Bonjour (smiling)
Gendarme: Gendarmerie Nationale (very unsmiling)
Kate: Enchanté! Kate (slightly giggly – holding out hand politely for hand shake)
Personally, I didn’t see the problem with introducing myself, but Lulu was cringing and the gendarme did not want to shake hands with me. How rude. Isn’t that the custom? Instead he gave me a sealed plastic bag, asked me to open it, fit it to his appendage and blow in it. Unfortunately, by then I had a bit of a problem with the giggles, and the machine kept making the wrong noise, so he asked me to pull off the road, park up, and sent an older and hairier gendarme to try and shock me into blowing instead of sucking. Success – faced with the size and threatening stance of the hairy one, I managed to produce a large puff, proving myself to be sober, if slightly dizzy! Great fun, and I did get a sort of Mona Lisa smile out of one of them in the end, although when asked if they would remain there until I came back with my camera, they sent me packing!

But it’s gonna to happen. My right hand drive days are numbered. The new car has been painstakingly chosen via the trying and ruling out of virtually every other car in the world, and has been narrowed down to a little black one, high up to drive, and, another first, automatic, so the little short legs don’t have to strain too much to push the clutch down to the floor. Black is not actually my car colour at all, but at this stage we have decided that beggars can definitely not be choosers, as I just couldn’t find any other car that I felt good driving.

Buying a second hand car in France is not un morceau de gâteau by any means. Expensive – and from a dealer, they tend to say no when you try and beat them down from the advertised price – and we are very bad at bluff, so have ended up paying full price. Picking it up next week from Montpellier so will let you know how my first sortie goes! What a patient husband I have. 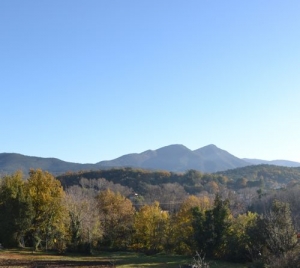 This is the view out of my office window today. Wow! Not a breath of wind, warm in the sunshine…… Perfect Day!