Spring is here! Well, no, obviously looking at the date, it isn’t… but it certainly feels like it! We have all the windows thrown wide open, and have been bare-armed for much of day. Haven’t taken the risk of letting the legs out yet though, as they are a bit on the hairy side, even for January, so best tucked away until the real spring arrives.

Despite the warm sunshine, around 18° in the actual sun but chillier in the shade, there’s a whole lot of head shaking going on. ’It’s not natural’, ’we’re going to pay for it in February’. Well, maybe – but I’m going to enjoy it while I can. It’s great to take off the layers after a week of snow in Leeds and I’m going to skip and grin through every delightful moment. 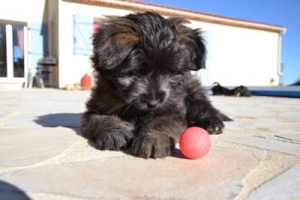 But before I go, the most exciting piece of news….meet Haribo!

We were sure we wouldn’t get another dog after we lost our beloved Bisou. It hurt too much, and even as it got easier, we were aware that we had so much more freedom without a dog. But it was a quiet, sad house.

Only dog owners and lovers will understand this, but do you know one of the things that I missed most about Her Royal Hairiness? Her smell. That doggie odour that would envelope me when I held my face against her furry body, giving me such a sense of peace and well being, love for this close friend who has never let me down, been on and at my side for so many years. The circle of life and death is a terrible thing, inevitable though it is, but I hope nevertheless that I will never get used to it.

And not to replace, never to replace, but to fill the enormous gap she left in our lives, we now have a bundle of fun and mischief – Haribo.

So yes, it’s taken me a while to actually get back to My Life in the P-O, but there is a good, and rather silly reason for that. There’s just been so much been going on, crazy puppy days, fun with friends, new car to learn to drive, Pilates sessions to attend, walks, runs, hops, skips and jumps……… I have so much to tell and so many photos to show, that it just seems like a mammoth task to actually start from the beginning of the year. But I will….. tomorrow or next week!! 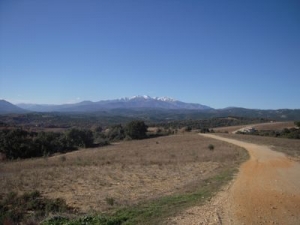 The weather continues to be magnificent. Yesterday, the thermometer reached a thumping 25° in warm sunshine. It’s walking weather, it’s cycling weather, it’s even BBQ weather, and we very nearly got the sausages out last night…. but the evenings aren’t quite warm enough to sit around for long without having to jump up and run round the garden a couple of times – which isnt what the evening apero is about. 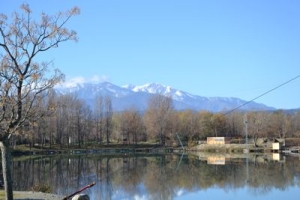 Today is another beauty so far. Doom and gloom on the weather front is predicted for the weekend onwards but we’ve had our fair share of fabulous weather, so a bit of winter won’t harm anyone.

Walked around the lakes at Saint Jean Pla de Corts yesterday and let Haribo off his lead. He was great, hung around our legs and didn’t try to disappear into the sunset as we feared. The smaller lake is now set up for a new ’teleski’. More on that later but I dont think the fishermen will be very pleased at losing their lake, and it’s certainly going to destroy the peace and quiet. 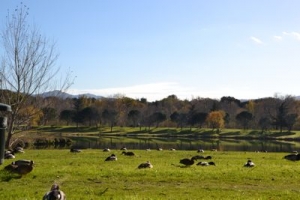 So far Haribo frightened of ducks, hoovers, hairdryers, in fact pretty well anything. Ducks not the stlightest bit frightened of him though round the lake at Saint Jean!!