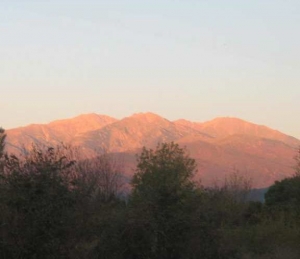 The weather is a bit hit and miss at the moment. Started out clear and crisp, the sun turning the Albères into a rosy pink glow as it rose behind them. Now it is windy, a little chilly and the bike ride I promised myself this afternoon is going to turn into an extra couple of hours in front of my computer as I race to complete the next P-O Life before the summer really arrives and I am tempted away from the office and up to mischief.

I love writing P-O Life though. I don’t think I will ever get bored with it. There is always something new to learn, someone new to chat to, an invitation to a concert, an opening, an exhibition. And of course I love writing. It’s a bit like clearing out a drawer or a cupboard and throwing loads of stuff away – that contented feeling when you know it is all neat and tidy and you’ve got rid of all those ’might come in one day’ items that you’ve been hanging on to for years ’just in case’. That’s what writing does for me. It clears my head. I’m not particularly good at it…..nor am I particularly bad at it…. but it gives me a great deal of pleasure. Here’s a silly poem I wrote for my writing group.

A visit to doctor Kate

A writer, a poet
And doesn’t she know it.
A whizz with a word is the gal.
An artist, she’s not
Can’t paint words from a pot,
But she’ll write up a storm for a pal.

As the years pass on by,
she continues to try
to put thoughts, tears and laughter in prose.
She don’t always do right
But it’s done with delight.
Open wide. It’s your turn for a dose! 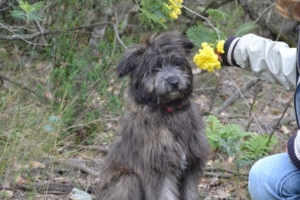 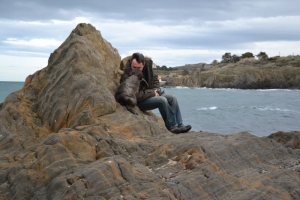 pot digger…. but a soft ball of fluff with teeth, ever playful, with boundless energy which is never spent, even after long and fantabulous walks around the cherry orchards and vineyards of Maureillas. It’s hard sometimes not to compare him with Bisou: she still holds a piece of my heart between her paws, but he is an adorable cutie, full of mischief and love.

And what about the new car you may well be asking. Weeeeellllllll, I have actually got used to driving with the gear stick on my right, have stopped opening the door every time I pull on the handbrake, and must admit that after all the drama, it is actually much easier driving a left hand drive car in France! (Do not DARE say ’I told you so’) My only problem is that I come out of the supermarket, the café, a friend’s house, get into the right hand side, sit there for a couple of seconds wondering where the steering wheel has gone, get out and go round the other side…..on a very regular basis. Waiting to grow out of it, but it doesn’t seem to be happening fast! 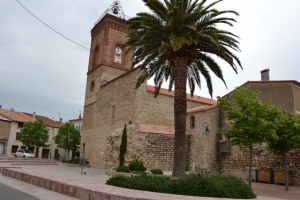 Spent several hours wandering around Palau del Vidre last week, a rather condescending ’conseiller municipal’ as my tour guide, who talked even more than I do, without pause, and kept grabbing my note book to write in it. Grrrrrrrrr. NOBODY, not even my friends get to write in my Hello Kitty note book. Anyway, sifting through the crap, he actually gave me an enormous amount of fascinating info about this tiny village, which used to be a garrison town, then a hospital village, due to its position on the via Dolmitia, the Roman built road linking Italy to Spain. Fascinating, and I’m really looking forward to writing it up for the next PO Life. And you may know that it is known for its glass blowing workshops, but did you know that there are five of them!! In a tiny village like that. 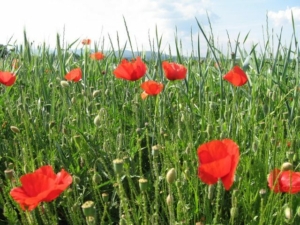 Wow, the poppies are amazing. Whole fields of them, brashly bobbing about amongst the foxtail barley, alongside dandelions and daisies and a myriad of other pretty pastel colours that I can’t even begin to name, because I don’t know what they are – I just know that wild is beautiful. 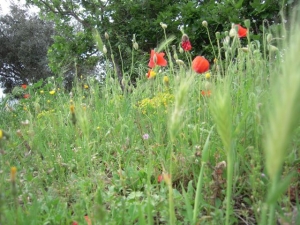 Just back from my Pilates in Maureillas. Soooooooo recommend this to anyone who wants to tone up but doesnt want to go mad, get sweaty and breathless. Leaves me feeling ’up for it’ whatever ’it’ may be.

Today is one of those perfect days, warm and sunny, not too hot, not too cool… I think it’s time to get the bike out and see what happens when dog meets bike. Will report back!

Went out for lunch in Spain yesterday. Lunch OK, nothing special, but company excellent. So nice to sit around a table with people you are comfortable with and have a giggle, with a sprinkling of serious conversation thrown in every now and then, and know that you’re not being judged for anything other than being a bit fluffy and getting giddy on one G & T (Spanish measures!).

Stopped off at La Jonq to replenish the gin supplies. Loadsa ladies out on the pull. Thought they’d been banned from the streets, but maybe it’s not being enforced.

Such a shame that France is closed on Sunday, as the P-O must lose so much business over the winter months to Spain. As you’re leaving La Jonq, you will see building work going on on your left. This actually started years ago and was abandoned but the project has finally got the green light. It is to be Gran Jonquera Designer Outlet and shopping centre. Here’s the website, tho’ there’s not much going on there yet.

A popular girl from La Jonq

Stopped work after her 50th bonk.

She walked round the town

Cos she couldn’t sit down

Til numbed by a litre of plonk.

Naughty boy. One musn’t encourage him!