The History of the Catalan Language

Whilst many believe the Catalan language to be of Spanish origin, it  actually developed independently out of Vulgar Latin spoken by the Romans who colonised the Tarragona area, forming the Roman province of Hispania Taraconensis. 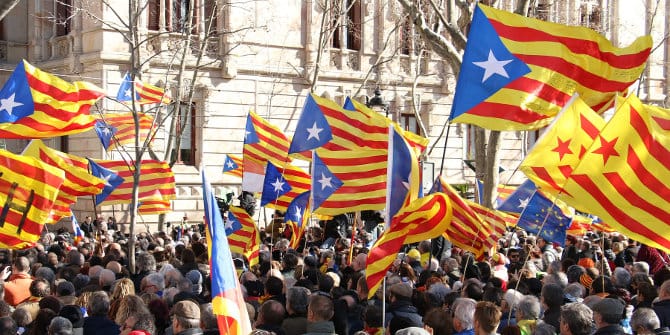 It spread around the Mediterranean due to various territory conquests, and as well as the Pyrénées Orientales and Catalonia, it is spoken in the Balearic Islands, parts of  Aragon,  Sardinia. and is the official language of Andorra.

There are two main dialect groups in modern Catalan: Occidental, (North-West Catalonia and Valencia) and Oriental, (Balearics, Roussillon and Alguero) but within these main groups, there are many more regional dialects.

Represssion in France and Spain

After the northern part of Catalonia was ceded to the French in 1659, Catalan was initially still used for official documents as the authorities adopted a softly softly approach to avoid stirring up resentment.

However, from 1682 onwards education in Perpignan was conducted in French and this spread to other public, and private domains, with Catalan left as a spoken language among the peasants from about 1700 onwards .  Jules Ferry’s educational laws cemented French as the language of education from the late 1800s.

Since the 1940s, there has been an ongoing effort to re-establish Catalan and it is now a recognised university course and taught in many schools as a second language with some schools offering Catalan-based learning in some, but not all, subjects (mainly due to a lack of teachers).

On the Spanish side of the border it was forbidden in public by Franco in the 1930s during and after the Spanish Civil War and only spoken in the home, with harsh penalties imposed for speaking the language in public. During this 36-year period, Catalan was obliged to go largely underground. School was conducted entirely in Spanish.

The language was reintroduced when democracy was reestablished and has been the official language of education in Catalonia since 1983.

Given their history, it is easy to understand why many Catalans speak both Catalan and Spanish or French.  It is estimated that around nine million people speak Catalan and 11 million understand it.

TIPS
Pronounce X as CH
Ñ Becomes YA
V and B are pronounced the same
ll sounds like yeuh.

Pau i salut (paoo ee saloot) = Cheers! (lit. peace and health)
T’estimo = I love you
Fins aviat = See you later
Parla catalá? = Do you speak Catalan
Bon profit! = Bon appetit (enjoy your meal)
Vols ballar amb mi? (bolz beuya um mee) = would you like to dance with me?
Què voldrien beure, vostès? (Keh vuldree-en bayoor, boostess) = What would you like to drink?
El compte si us plau (ell conte see ousse plow) = the bill please
Plou a bots i barrals = it’s raining cats and dogs ( boats and casks)
El meu aerolliscador és ple d’anguiles! = my hovercraft is full of eels (you never know when you might need this one!)