The faces may be different but the situation is the same.

In 1939 Spanish refugees fleeing Franco’s bombs, crossed the border into our region and were forced into makeshift camps in the sands of Argeles.

Later came Jews seeking refuge from the Germans. When the Swiss Red Cross nurse Elisabeth Eidenbenz visited she was appalled by the lack of sanitation.

Indignant, she set up a maternity hospital in an abandoned house in Elne where pregnant mothers could give birth in decent conditions. 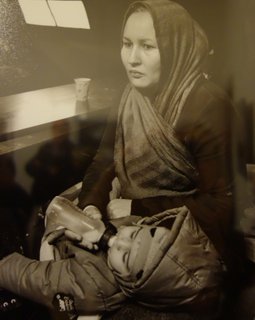 In 2015 driven from their homes by war, Syrians, Iraqis and Afghans sought asylum in the European Union.

The photographer Marie Dorigny and the researcher in women’s rights Jane Freedman were commissioned by the European Parliament to produce a report on these women and children from their first footfall on European soil, to their registration in “retention” camps to their final destination in a German refugee centre.

Women are often “invisible”, yet, according to Freedman, they make up 50 percent of the immigrant population.

Under camp conditions, miscarriages, premature births and infant mortality are frequent, the result of fatigue, lack of food and clean drinking water. Even if the child survives, he is likely to suffer from malnutrition and disease.

The images are horribly familiar: lines of frightened people, gaunt faces pressed against a wire fence, children lost in a sea of bodies , mother with child, staring into an uncertain future. The black and white photographs suit the stark subject matter.

Seeing these images prompts one to ask the same question as Elisabeth Eidenbenz. And, yes, there is something you can do!

Immigrants (67 minors) have recently been installed in the PO at Sainte Marie de la Mer and Bolquère after the destruction of the Calais “jungle”.

Dorigny says simple gestures, small gifts (clothes, blankets, games or books) can brighten the lives of these young people and make them feel human again, not just another part of a wave.