First we had the ‘Recluse brun’ (brown recluse spider, fiddleback, or also known as the violin spider due to its shape and markings) spotted last year in the Gard and Herault departments, now it’s the ‘veuve noire’ or Black Widow, also known as the Mediterranean or European Black Widow and spotted several times in the Pyrénées-Orientales! Argghhh!

Ecologist Philippe Martin tells us that we can blame it on the cows! Their grazing of the field seems to have provided the right conditions to tempt the Veuve Noire into our neck of the woods – and it’s not just any old Black Widow. Oh no, this is the Veuve Noire d’Europe (called the Malmignatte in Southern France ), the most dangerous in France!

However, according to the Midi Libre, this little beauty, found in a field near Salagou in the Hérault, is related to the extremely dangerous black widow of America – and is a comparatively pleasant enough chap!

He or she eats insects, a small lizard or two…… and you would have to get her (see below) really mad, or trapped to get bitten. Even then, the bite is rarely fatal, but it can be very painful and cause serous swelling for several days!

So calm down, unpack your suitcase, and let’s find out a bit more about these little darlings! 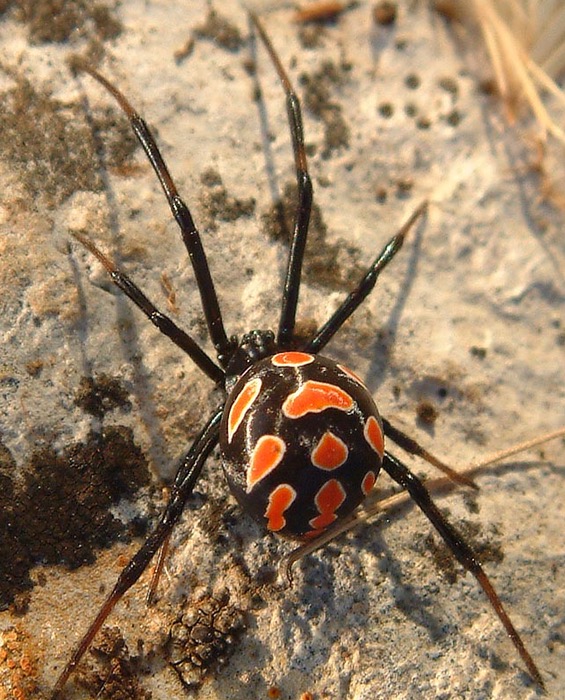 First out all, how did they get their name? Well, since the females have a tendency to eat their mate after mating, and end up alone, that’s an easy one. And so is the colour. This spider is shiny black with an orange or red mark that looks like an hourglass.

Females are usually about 1-1/2 inches long and can easily be mistaken for a black or red grape in vineyards!

Its Latin name, Latrodectus tredecimguttatus, means “with thirteen spots” and describes the 13 spots on its body,  usually red, but sometimes orange or yellow.

The spider’s bite makes a double puncture mark on the skin and is painful, but whilst the venom is toxic, only a very small amount is injected so it is rarely fatal. Described as timid, the Black Widow will attempt to escape rather than bite.

The males are tiny, and dont bite – it’s all down to the ladies.

By autumn, the males have normally died or been eaten by their other half, leaving the ladies to spin their webs and watch over their cocoons, each containing hundreds of baby spiders.

Out of these, only a handful of spiderlings from each cocoon survive.