Join  Marian Thornley every week as she shares the ups, downs and sideways of her move to Céret, in the Pyrénées-Orientales. Share a piece of  the Good Life….and the not-so-good life as she tells some tales of settling in, and paints vivid and hilarious pictures of  characters she meets.

Lunch with the neighbours

The appointed day for Sunday lunch with the neighbours arrived. As I explained in a previous blog entry our neighbour had peered through the window somewhat the worse for wear and had invited us to a traditional Catalan Sunday lunch with himself and his aged mother.

I’d even written the date down on a piece of paper to make sure there were no misunderstandings. Hubby and I had worried about this forthcoming occasion rather a lot.

I mean, how do you get through an entire meal when you can’t speak much of the language? With some foreboding I knew this was going to fall on my reluctant shoulders since hubby can’t speak any French whatsoever and is the master of the Gallic shrug.

The other thing that was worrying me was, what is an acceptable present? Two bottles of wine plus dessert, or a box of chocolates and a plant? In the end I made an apple cake.

In conversations with friends we speculated on what Catalan speciality we might be served. Jo thought it would be black pudding, whereas Arthur put his money on sausages. Given that our neighbours had just slaughtered their pig, both were quite likely.

Feeling as if we were going to our own executions, at midi we put the bottle of wine in a rucksack and carried the apple cake over the fields to our neighbour’s house. After shouting coo-coo several times, a head popped out of an upstairs window and our neighbour’s 85-year-old mother called down to us that she was making her soup. Come on up, she said.

We went up the steep concrete steps to find her in darkness in her kitchen, soup boiling away on the open fire, and no sign of Bloodshot Eye Man. What a relief! We explained we had bought her a present and she pressed half a dozen eggs into our hands as an exchange, then proceeded to babble away in a strong accent and in double-quick time about tractors, land and where we can buy chickens in Spain for a good price. As soon as we could we escaped and went down to town for lunch.

That week the chant group were all agog to discover how lunch had gone and roared with laughter when I told them. They decided I should have a Neighbour Alert code. “When you spot your neighbour in the garden type Neighbour Alert into Facebook and I’ll ring you to tell you that you’re late for an urgent appointment,” one offered. 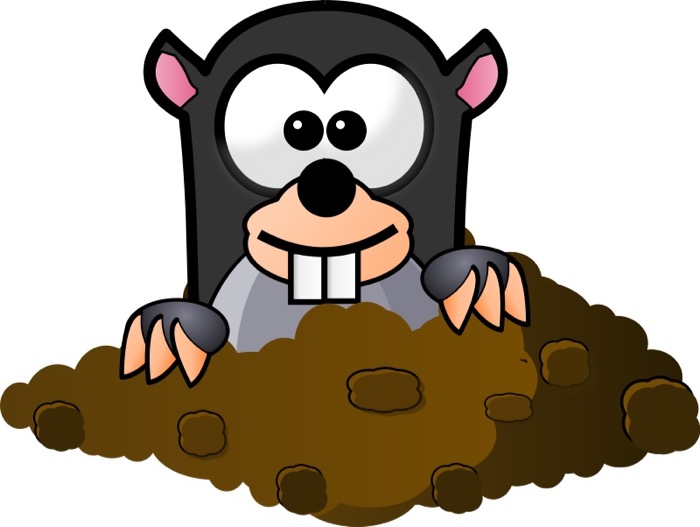 The vegetable patch had turned into a minefield, literally. There were more mole tunnels under our veggies than there was solid ground and anyone weeding the veg patch ran the risk of disappearing into a black hole.  Hubby decided enough was enough and bought something at Gamm Vert to put an end to Mr Mole.

This was a rather expensive box supposedly containing a complicated contraption which should be primed with miniature bombs. The triggering device is placed in the passageway and is triggered when the mole approaches. Unfortunately, it seems that Gamm Vert’s customers are a pilfering lot and the box contained only one ‘bomb’ instead of 20. Taking the box back to Gamm Vert was not a success and we were met with the usual Gallic shrug. Back home I translated the instructions while hubby, on hands and knees, gingerly peered into a molehill.

The next day we ventured forth to check our new trap and found it had been disturbed but not detonated.  I was in the process of trying to disarm it when it went off with a huge bang and puff of smoke. For a few seconds we both thought we had been blown up. Hubby had actually been propelled across the lawn. 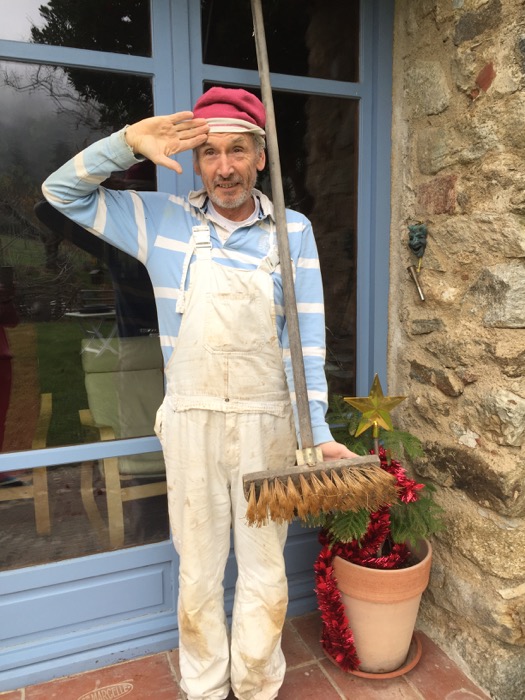 He stood up, holding both hands on his ears, and accused me of trying to make him deaf. One ear seemed to have been damaged and he couldn’t hear very well at all. He said it was me who made him put his ear to the thing while I was trying to disarm it (not true, m’lud). The explosion had affected his brain as well as his ears, it seemed. After this debacle I’ve never been allowed near the thing, hubby evidently still convinced I had been trying to kill him.

Since the early days, when we kept a small herd of llamas, we’d met an old lady and her son, who regularly promenaded along the Route du Balcon. They would sit at the end of our drive for a rest, while the old lady shouted out coo-coo to the llamas. It turned out the son (who was himself in his 60s) spoke good English and we became very friendly with the pair, to the extent of putting a couple of seats at the end of our driveway for them. 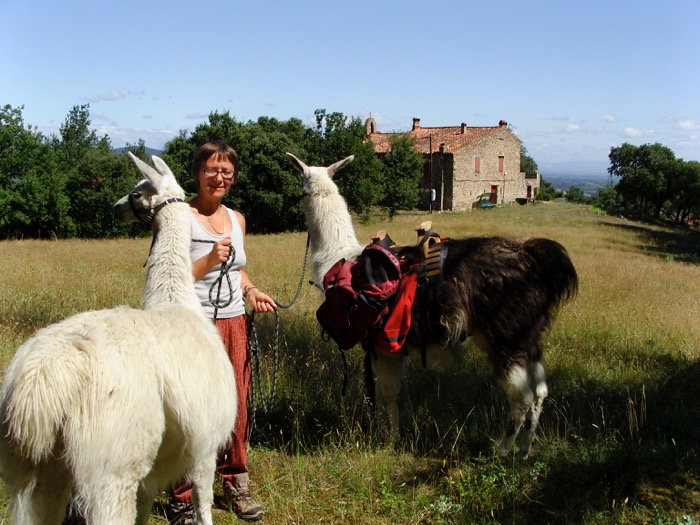 The old lady looked very frail and we learned she was 86. She babbled away in too-fast French for me to be able to understand everything she said, but I enjoyed our encounters. One morning we met the pair walking as usual along the Balcon road, and the son told us that he was worried about his mother. He thought she would benefit from yoga classes and he asked me if she might join. I told him that yes, I ran a class that consisted of gentle movement and techniques for relaxation and that she would be welcome the following week. Once home I rang my own teacher in a state of panic. “What do I do with a frail 86-year-old in the class?” I asked him.

I spent the following week designing a class into which the old lady could safely be incorporated. It was very important, my teacher had stressed, that she remain seated the whole time, as old people’s tendons can very easily snap, apparently. By now I was even more worried. But Jo, who was confined to a wheelchair, was also in the class. As a result of her condition, Jo found it difficult to concentrate and had a tendency to fall asleep at any hour of the day. I thought it would be a good idea to ask her to sit next to the old lady and discreetly translate my instructions into French. It would give her something to think about and the old lady might like being near to someone who could speak French.

When the class began I seated Jo in a chair near the door while the other students came in. Two new students appeared, which was great. There was no sign of the old lady so we started the class. About 15 minutes later there was a knocking on the patio doors. The old lady was peering in, smiling and waving, keen to enter to do her yoga class. I sat her next to Jo as planned.

Unfortunately Jo had not really understood my instructions, she started to translate my every word in a very loud voice which was quite disruptive to everyone else. It even annoyed the old lady so much that she asked Jo to shut up. My old lady was a very feisty old dear, standing up and holding the back of the chair for balances, and trying her best to join in, despite my best efforts to get her to sit down. Then Jo pointed over to the patio doors and said in a very loud voice, “I want to move over there, in the sun.” I tried to put her off but she persisted and eventually I had to help her across the room, to a chair by the window. Then she fell asleep and nearly fell off the chair, woke up, dropped her stick, fell asleep and the whole cycle started again. In the midst of all this chaos, her dog stared at us through the patio doors, whining and trying to get in.

I never saw the two new students ever again, and the following week, when I tried to suggest that Jo sit on the sofa she was offended and did not come at all. Neither did the old lady. But to my surprise, the old lady’s son become an enthusiastic member of the dynamic class and even joined the chant group. However, this didn’t last long.

It had been several months since we had seen the old lady and her son when  we bumped into him in a cafe in Perpignan. We sat at the next table and he drew his table up to ours.

“What do you think of my mother?” he said suddenly. “Do you think she is mad?”

We hesitated, forks suspended between plate and mouth while we both separately pondered this dilemma.

“She’s amazing,” Bill said at last. The son did not understand and cocked his eyebrows at me for explanation.

“Incroyable,” I said. The old lady’s son smiled with satisfaction and tucked into his meal.