In November 2008 I left Mas Pallagourdi to spend a couple of weeks in Austria learning the art of Vedic chant. From there I journeyed to the Yoga Mandiram in Chennai, India for extra training. November is the monsoon season in Chennai and I found large parts of the city under water. The Mandiram too had been flooded and the floor was still being mopped dry when I arrived. The residents of Chennai were used to this happening every year and went about their business wearing plastic bags on their heads. The recent floods in Britain have been bad enough, but while in Chennai I read in the local newspaper that there were water snakes swimming around in the flood waters. 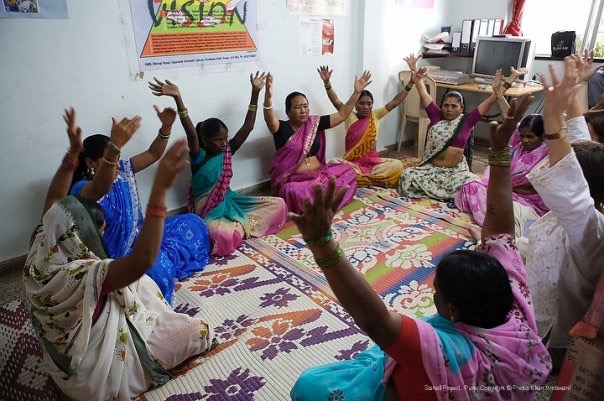 My daughter had spent six months in the northern Indian city of Pune some months earlier. She had been volunteering at a sex-workers’ cooperative, and suggested that I visit them to teach the women yoga. At the same time, my 3 year teacher training course in London was coming to a close. I needed a yoga project as a kind of end-of-course dissertation. Teaching the sex workers would be perfect for this and a great experience to boot.

Pune was a very different city to Chennai. In 2008 the latter still had one foot in old India, with sprawling huts and dirt roads all around the growing city, the people conservative and holding fast to Indian traditions in their food and dress. In all my time in Chennai then and in future years, I never saw an Indian woman wearing anything other than Indian sari or salwar kameez. So, arriving in Pune was a shock. I found a very modern city with  many lanes of fast moving traffic, both men and women in western dress, and lots of restaurants offering all manner of foods. I was the first to arrive, with Sarah due the following day. I have never been so relieved in my life as when I saw her stepping out of a rickshaw outside our hotel.

I would never have found the Saheli Sangh headquarters without Sarah. How she had found this tiny house in the red light district by herself I will never know and she was now able to give directions in basic Hindi to the rickshaw driver and he knew not to try any funny business, such as driving us twice around the outskirts. She was greeted warmly by the women, who also greeted me with smiles and hugs. Thirty children who lived in one small room were running around in bare feet, with broad grins and smiles. Sarah recognised most of them and and they were obviously very pleased to see her. Many of the women had told their stories to Sarah on her previous visit. Most had been sold to brothels by their own husbands, brothers or fathers and they had endured lives of physical and mental cruelty. Disease was a constant companion too. Despite this it was amazing to see the vitality and comradeship between the women, their laughter and joy.

Although there was a lot of interest in us and in the idea of yoga, Sarah had warned me to be patient: things never happen on schedule in India, and sometimes never happen at all. We needed all the peer educators, women who had been sex workers themselves at one time, to be present at the same time, willing to commit some time to yoga. We also needed at least one translator. A girl called Padmina, who worked as an administrator, offered to help us translate, and eventually, the women started to pull rush mats out onto the floor of a little side room. We were ready to begin!

I started with some simple movements, and quickly found that even the most gentle of these were not going to work. The women were very stiff and hampered by their saris. Moving on, I explained how using the breath can help keep us healthy. The women nodded, clearly they were already familiar with these ideas, and they joined in the practice with enthusiasm. To close the session I decided to give the ladies a guided relaxation and they laid down on the rush mats. I tried to help them lie in a more relaxed way, but Padmina proceeded to jump violently from one body to another, pulling vigorously on arms and legs, and exclaiming, “No, no! Not like that!” It wasn’t what I wanted to happen, but I was powerless to do anything about it.

Each day we managed to do some yoga. I used friendship bracelets, objects to remember being relaxed (giving them each a small present), and compassion towards oneself. I told the story of the five breaths, to much nodding, and the ladies joined in very enthusiastically when we used the ‘Om shanti’ (peace) chant with simple arm movements. One day, the director of the charity told Sarah that one woman had said to her “thank you Mam, for bringing Sarah and her mother, I have slept well for the first time in many years.”

On our last day we were invited to attend a meeting which was generating a lot of excitement. At the end of the cramped corridor was a tiny kitchen. Two ladies were cross legged, busily cooking piles of food, and people were being ferried to the hall that had been booked. We tagged along, of course and took our seats at the back. The hall was full of women and their children, most were sex workers, seated on the floor in front of the chairs, before a podium. Various addresses were given, none of which we understood, of course, and then food was distributed. After that, the social workers performed a dance.

Before we left Pune, Sarah wanted to buy dinner for Padmina’s father, who had been very hospitable to her on her previous visit. Over dinner, we told him we wanted to spend our last few days in India — somewhere nice. “You must visit my village,” he exclaimed. “It is on the beach, with many cafes and restaurants, there is a very cheap hotel there, and you can get there by bus. I will help you buy the tickets.” So that was settled. The next day he came with us to the chaotic bus station in Pune. To buy bus tickets we had to join a very long queue and answer many questions but in the end it was done.

The next morning the bus station was no less chaotic and we realised we had a problem. How would we recognise our bus among the dozens coming and going? The Sanskrit I had learned with so much effort on my chant course came in useful for the first and last time: I recognised the name of our destination and we climbed aboard. At this point I bitterly regretted bringing a suitcase with me. I found myself sitting next to an old lady, with my suitcase jammed very uncomfortably on my knees for the nine hour journey.

Travel in India is not comfortable. For a start the seats are like concrete and there is no apparent suspension. There is no glass in the windows either. For the next nine hours we trundled through pleasant green hills and dales, while the TB-afflicted old woman in front of us coughed into a bag, and periodically tipped the contents out of the window. The phlegm flew backwards and invariably into Sarah’s face. After a few hours I started to badly need a wee. Eventually the coach drew into a roadside services (use your imagination) and I followed the line of women around the shanty hut to find the toilets.

Our destination was a small village next to the sea, and we were booked into a room in a clean but threadbare hostel. We wandered around outside to find somewhere to eat. It became apparent very quickly that there were no restaurants and no shops. There was only a rather dirty beach, a few shanty huts and one modern looking building near our hotel. On the roof terrace of this building we could see lights and the buzz of people chatting and eating. A steady stream of people were coming and going, and I asked someone if this was a restaurant, surely it was! No, the person replied, this is a private party. Still we stood and watched, more people were entering and leaving the building, and hunger got the better of me. I left my shoes with the others at the base of the steps and boldly strode up the steps. A man greeted me at the top and I asked if I could come in. Yes, yes of course he said, waving his arm toward the brightly lit room within.

“Sarah, come on,” I shouted at her doubting face in the gloom below. Our host led us up to the roof terrace where about 50 people were seated, eating from small plates. We sat down, smiled happily to our neighbours and tucked in. Someone explained the restaurant was due to open the following day and as we left, we promised to return. After a night in the threadbare hostel however, we decided to make a break for it. A rickshaw took us to the nearest train station where we boarded the first train for Goa.

Our time in India was drawing to a close and we both had flights to catch from Mumbai. The overnight coach seemed the best and cheapest way of getting back to the city so we booked our seats and took our places in tiny cabins at the rear of the coach. This was fine until we woke up to find it was dark outside and the coach had stopped. The driver walked to the back of the bus, followed by two wrinkled, toothless old men and told us to move up. Without a word, Sarah dived into the baggage compartment and I followed. We arrived in Mumbai the following morning covered in bruises and freezing but none the worse for the experience.

On my arrival back in France I found that Opal, Lupin and the goats had been delivered. Poor little billy goat, only a few months old, had been knocked unconscious by the four feisty lady goats, and Bill had set up a hospital for him in the barn, with a little pen made out of straw bales. Then the weather closed in and we were cloaked in snow.