Do you want a rabbit? Alive or dead?

On the afternoon of Christmas Eve I decided to take a break from the kitchen and the tempting calories within, and went for a stroll up our road. Between our house and that of our shepherdess neighbour, I spied a small white van parked haphazardly at the side of the narrow road. Our normally jolly, moustachioed neighbour appeared to be slumped over the wheel. I walked on but soon thought better of it. What if he were dead? So I walked back and gingerly banged on the window. The slumped man didn’t move and I noticed the keys were in the ignition and worse still, the engine was running. I banged harder, still the man did not move. I opened the door and shook him vigorously. He opened a bloodshot eye and looked at me. “Ca va?” I asked, in my best French. 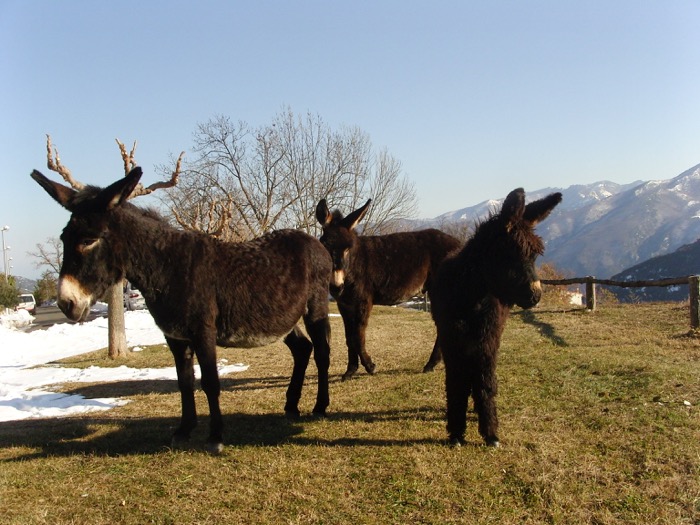 “Oui, oui,” came the reply and the bloodshot eye closed. There was nothing for it but to close the door again, but as I looked back I could see that he had slumped back over the wheel. I should remove the keys, I thought, but I was not brave enough, and continued walking.

Some few metres past the driveway to my neighbour’s farm I came across an old woman who looked to be in her mid 70s, clothed in long black skirts. She was busy herding my neighbour’s flock of sheep back towards the farm. “Vous avez besoin d’un coup de main?” I offered, thinking I had inadvertently wandered into a parallel universe. No, no, its alright, she replied. I enquired after the health of my shepherdess neighbour and was told she had two broken wrists and was unable to do anything for herself. I returned home, noticing that Bloodshot Eye had woken up sufficiently to have driven off, and phoned a French friend. A few minutes later my friend and I, armed with a small gift and a Christmas card, arrived in my neighbour’s farmyard. We entered through a broken gate and found ourselves at the foot of some concrete steps. A few chickens scratched around the steps and her sheepdog watched us suspiciously. We mounted the steps and found the door wide open, but there was no reply to our shouts. Surely she couldn’t be in here, with this wintry wind whistling through the open door? Sure enough, my elderly shepherdess neighbour hobbled to the door,  pinafore around her waist, no tights or socks, and an old pair of shoes on her feet. She waved us in and explained in a mix of French and Catalan that she was busy preparing dinner.

She sat down at a table and, ignoring the fact that both arms were encased in plaster, continued to peel some potatoes, which were then thrown into a pot which was gently bubbling away over an open fire in the huge hearth. The kitchen looked as if nothing much had changed in the last few hundred years. A few dried herbs were retrieved from a chest and added to the pot. There was nothing else in the room other than a basic sink, and a huge black pot in a corner of the hearth. “You’ve got a tractor, haven’t you?” she demanded suddenly, her china blue eyes looking directly into mine. “Well, I have a job you could do for me, repairing my driveway.”

“Of course,” I replied, “hubby will come and do it after Christmas.” My neighbour nodded with satisfaction, and as there seemed nothing else to say, we left.

On Boxing Day, hubby drove the brake-less tractor carefully up the road to our neighbour’s farm and started to repair the potholes in the driveway. Suddenly the door of the mas flew open and her son and grandson appeared. Everyone pitched in and soon the job was done. Afterwards we were invited into the mas and shown around. The house still has the layout of farmhouses in times gone by. The chickens lived in a kind of cellar beneath the kitchen. An adjoining room housed the pig and there was another for a dozen or so rabbits. We found out that the big black pot next to the fire was for making black pudding.

Our neighbours were evidently pleased with our help. “Do you want a rabbit?” they asked.

“Yes,” we replied, having never been known to turn anything down.

“Come back on Thursday, then,” our neighbour replied.

In the event, it was me who went for the rabbit with my friend Jo. As we walked up the drive some locals were driving down in their car, grinning widely, with two freshly killed rabbits on the back seat. Perhaps it was Rabbit-killing Thursday. Our rabbit was waiting for us in the sink, killed, skinned and gutted. I cooked it with mustard, it was delicious.