English bell-ringing comes to the Pyrenees 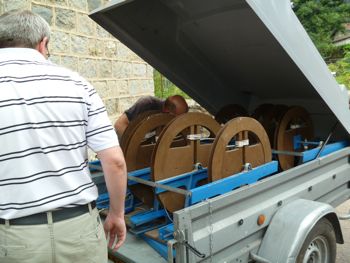 As previously reported by ‘P.O. Life’, the small Anglican congregation of Vernet-les-Bains held several days of celebrations in early July 2011.  The high point of these celebrations was the morning of Saturday 9th July when Bishop David Hamid presided over a service to re-dedicate St George’s Church, dedicate a new stained-glass window, and install the Reverend David Phillips as the new Priest in Charge.

All of this fitted perfectly into this very Anglophile town which has a statue to the ‘Entente Cordiale’ outside the Mairie, a Cascade des Anglais and in 2011 has a year-long programme of events celebrating the centenary of Rudyard Kipling, probably the most famous of many regular English visitors.

Along with the new window, a pipe organ has been sourced for the church but for some of the congregation there was still one thing missing – proper English bells and ringing.  St George’s has a nice little tower that would house a set of bells very comfortably but installing a permanent ring in time for July was too ambitious even for mad-keen bell-ringers.  However, a solution appeared during the Spring. 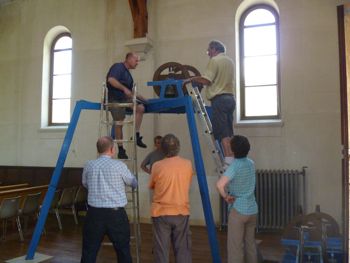 Jeff and Catherine Ladd were invited to visit Alistair Moon in Senouillac near Albi. Alistair lives in a former chateau and, finding that he missed bell-ringing when he moved to France, acquired a ‘mini-ring’ for his barn.  This consists of eight small bells (the largest weighing 10lb) set atop a frame made of several steel girders.  While the bells are considerably smaller than those you would find in a church tower (10 cwt would be a more common weight), they are attached to wheels and rung with ropes in almost exactly the same way.  When Alistair mentioned that they could be dismantled and transported fairly easily, we were quick to ask if he might be able to bring them to Vernet for the weekend of July 9th/10th.  He seemed pretty keen!

We already knew that Mike Strutt, another part-time member of the congregation, was a ringer so we had to find a minimum of four others to be able to ring for the service. In the end there were eleven of us including ex-pat ringers from Germany and Provence and a couple who travelled all the way from Ilkley, N Yorks by train.

Alistair and the bells arrived on the Friday afternoon and with help from the church treasurer, John Shearman, the frame and bells were erected inside the entrance to the church.  A practice session was held in the evening as we endeavoured to master the rather different technique required for these small bells and this was followed in true ringers’ style by a meal out at a local pizzeria. 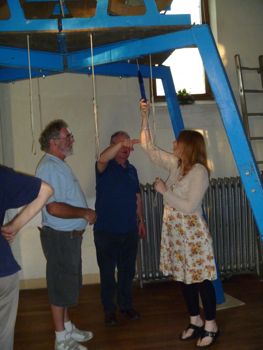 An extended piece of ringing known as a quarter-peal was successfully rung before the service on Saturday morning and the bells were also rung afterwards prompting much interest from English and French members of the congregation.

After a lunch reception in the grand surroundings of the Casino, eight ringers returned to St George’s to attempt a full peal in honour of the occasion.  A peal, as you might imagine, is four times the length of a quarter-peal and comprises at least 5000 rows (or changes) in which each bell sounds once.  Moreover, the order of the bells within each change has to be different.  So concentration is required plus stamina and the ability to shut out annoying flies and the afternoon heat.  However, in the end it was none of these things that let us down but simply one person losing the knack of ringing their tiny bell and going crashing about the place until everyone else became lost too.  Rules is rules and even though we were within sight of the end, we were not allowed to count this as a peal.  Cue to retire for more food and drink and to reconsider our options

Although St George’s has been rededicated, the local authorities have not yet deemed it safe for regular use and so the Sunday morning service was held, as usual, in the Catholic chapel of Notre Dame du Paradis in the main square.  One of our number goes nowhere without his set of handbells and these were used to welcome the congregation and also at the end of the service, again prompting interest and favourable comment from bystanders. 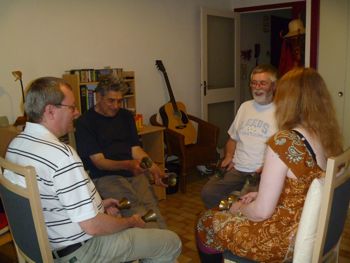 Following the service, the eight who had tried so hard the previous day returned to the scene of the crime and this time succeeded in ringing a full peal on the mini-ring at St George’s.  Sighs of relief all round!  Then it was time to help Alistair pack away the bells and send him on his way with our hearty thanks.  Finally, to round off the weekend’s ringing, a peal was rung on the handbells – same rules but this time you have to ring two bells each; at least you get to sit down while you do it.

We were delighted to be able to make a genuinely English contribution to the weekend’s celebrations and it may be that in the future when St George’s is in regular use that getting our own bells could be on the agenda.  With a proper system of sound control they shouldn’t annoy the neighbours and they would bring plenty of tourist business for the town for, as we have seen, keen bell-ringers will travel a long way for something new and different.