Can you hear bees?’ my friend asked the other day. We were walking in a vineyard. Now she mentioned it, yes I could. But not the gentle drone of one or two on the clover at our feet. This was a much bigger hum – a sound I recognised from a spring day several years ago when I was in my garden. Somewhere nearby, a swarm was on the move. 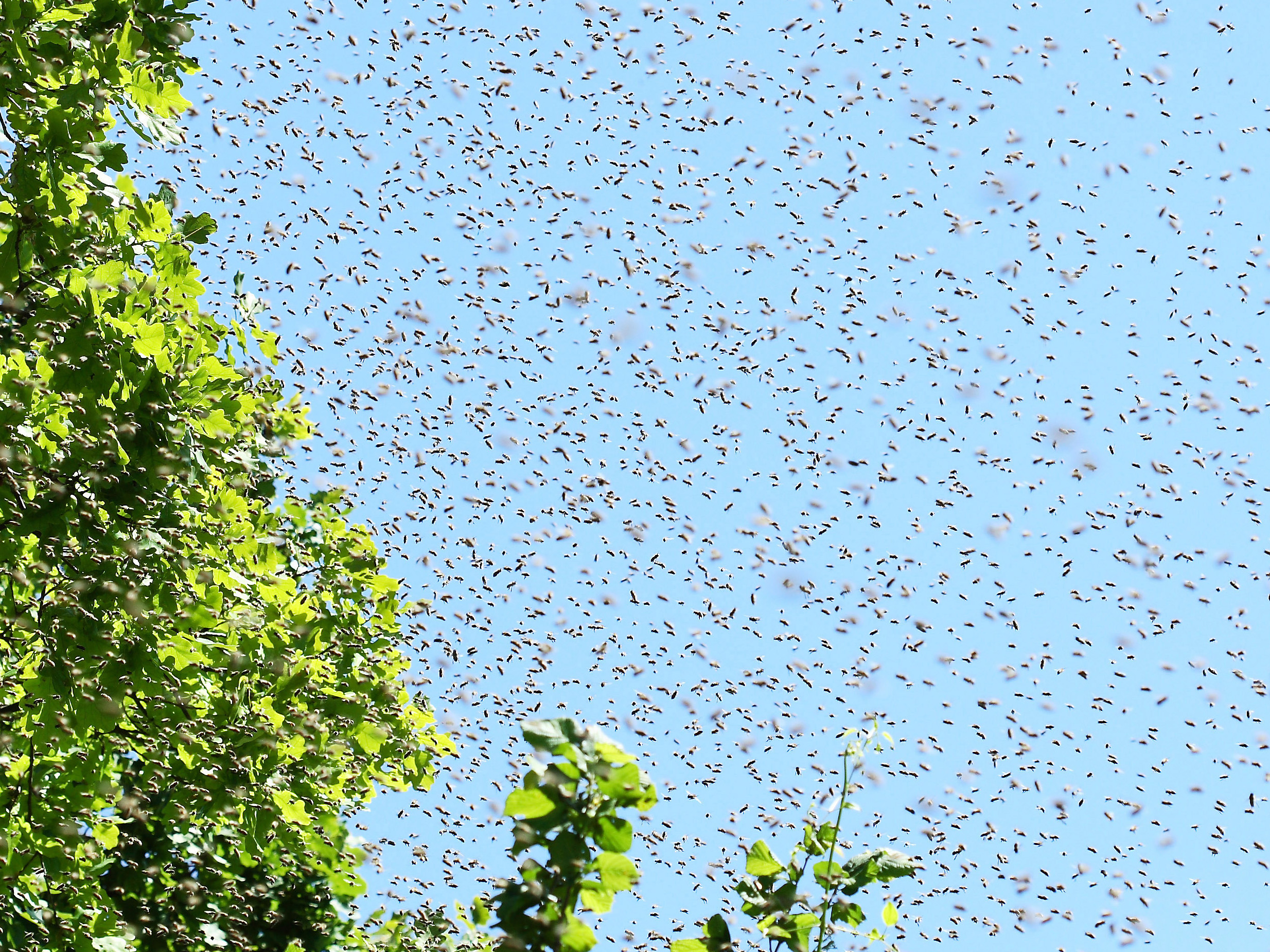 As the weather warms up, honey bees stir and the colony starts to grow.

Eventually it can get so overcrowded that a second queen is created. And this triggers the original queen’s departure, with 20,000 or so followers, in search of a new home. They fly in a protective bunch around her. But she’s not a strong flier and has to make regular stops – usually in a tree – to get her breath back.

Again, the workers will follow and gradually form a tightly packed, hanging mass around her (better described in French as une barbe). Meanwhile scouts continue to search for suitable permanent premises. 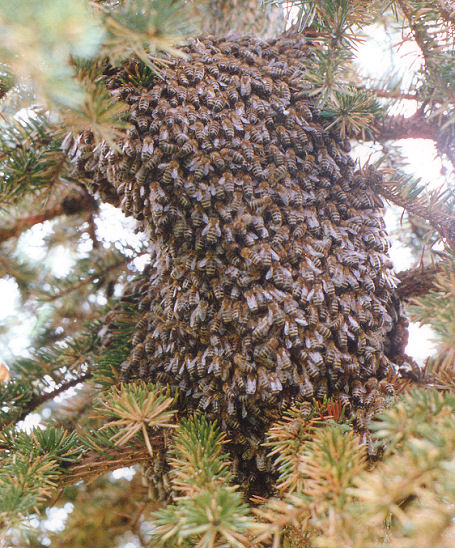 With all this in mind, the next question for my friend and me was: Were 20,000 bees coming our way?

I remembered how, last time, I heard the hum seconds before the black cloud appeared, zooming towards me. I remembered a jab of fear, despite knowing that bees won’t attack unless provoked. Nevertheless, it’s sensible to get out of their way. And that’s easy if you’re in your garden, but what if you’re in a vineyard with nowhere to hide?

If it’s impossible to take cover (and there may not be time to get off the flight path) the safest course of action might be to crouch as low as possible, so you look less like a comfortable tree.

If dogs or children are with you, try to keep them calm. You could cover their heads with something – a jacket perhaps – or shield them with your own body.

If any bees do land on you, there’s no need to panic. Above all, don’t flail your arms or bat at them, because those signals could be misinterpreted and get you stung. Keep as still as you can, be patient and wait for them to fly away of their own accord. They’re not aggressive like wasps.

In fact wasps and hornets don’t travel in swarms like this. It’s only the queen of a social wasp colony that survives to hibernate through the winter. Come the spring, she will build a new paper nest for the generation to come.

Adult wasps will only leave the nest in a swarm if you attack it, accidentally or otherwise. In which case, RUN!

Happily, the other day in the vineyard, we didn’t get to test out my strategy for bees; they buzzed off somewhere else. 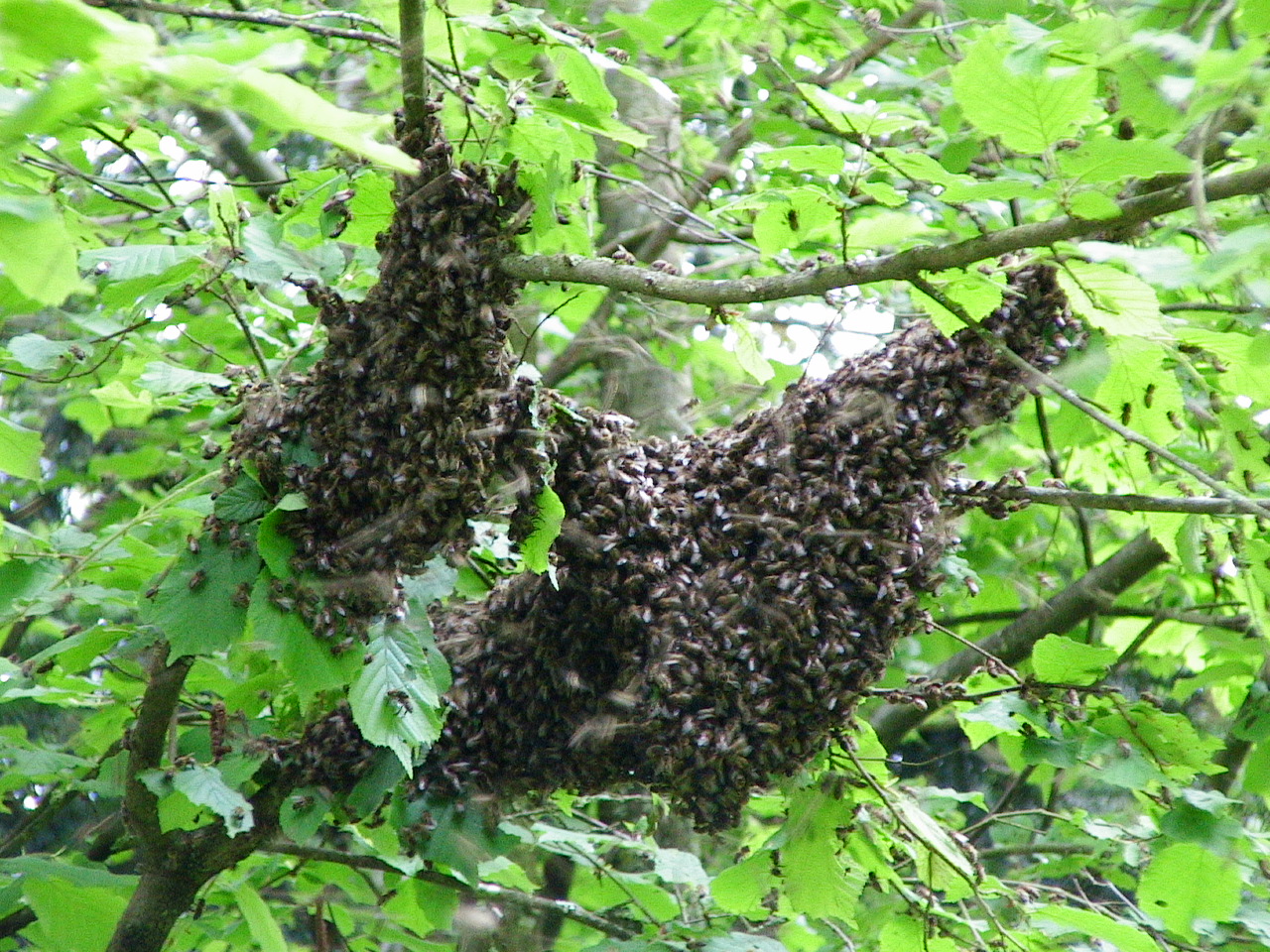 But, what to do if they use your garden – or house! – either as an aire on their flyway, or as a permanent home?

It’s illegal to destroy bees, and anyway we need as many as we can get. So the pompiers won’t do anything. Your only options are to wait until they go away (it could take a day, even if they’re just resting), or find a beekeeper (un apiculteur) – who will be delighted to collect and re-house them for free, assuming they’re accessible.

This was the solution when the swarm in my garden settled low down in a conifer. It was fascinating watching the beekeeper at work. No bees were harmed, very few were left behind, no one was stung, and I got a jar of delicious honey.

The Warblers are regular contributors to anglophone-direct. Why not sign up to our newsletter so you don’t miss any of their wonderfully informative posts on the flora and fauna of our beautiful region?