No one expects the Medieval Inquisition! 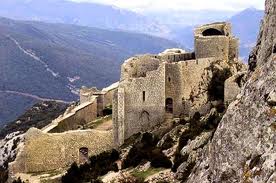 The Cathars (believed to be derived from the Greek katharos, meaning perfect) were a breakaway religious sect, who spread their doctrine throughout the region in the eleventh century, at a time when many Christians were questioning their beliefs.

By the early thirteenth century it was probably the majority religion in the area, supported as much by the nobility as by the common people. The Roman Church was outraged. Some of their own priests had become Cathars and this was not to be tolerated. Worst of all, Cathars refused to pay their tithes.

Pope Innocent III quickly proclaimed the religion heretic, and called for a crusade to crush the Cathars. Men, women and children were massacred, the nobility disgraced, humiliated and replaced, and the ruins of the famous “Cathar castles” are a sad heritage of the violence that took over a region which had, until then, always been known for its policy of tolerance.

The Medieval Inquisition, infamous for their “robust” interrogation and conviction methods of torture, was also set up to eradicate the last vestiges of Catharism. It has been suggested in some modern fiction and non-fiction books that the Cathars could have been the protectors of the Holy Grail of Christian mythology. Cathar Christianity does still exist today in the form of various Fellowships scattered around the world and who knows what treasures might have been passed on through the generations!

A DAY OUT IN CATHAR COUNTRY