The Escapades of Oscar! 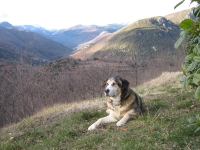 This tail is NOT a shaggy dog story! And neither is the amazing follow-up exactly a year later, January 2011 (see below)!!

We returned from England one Monday in January 2010 with Ryanair trumpeting us into Gerona 15 mins early.

As a result, we got to the kennels to collect Oscar rather than wait until the Tuesday morning.

Unusually the kennels were closed. Oscar had got bored with waiting for us and had escaped at 10am. The kennel staff had been out all day searching in relays, the police had been notified etc…….. but no Oscar.

For those who don’t know, the kennels are situated on a triangle of land bordered by 2 fast moving roads (one a dual carriageway, and the railway line into Spain.

With no roads within a mile of home, Oscar’s road sense is less than zero, so we could only hope that he had crossed the vineyards where the kennels’ people walk him and occupied himself chasing the rabbit population and got lost.

We also thought, if he hadn’t become a flattened version of his former self, that he’d make his way back to the kennels for his dinner. His tummy clock is very reliable! At 6pm still no Oscar.

We drove around vaguely for an hour, looking rather silly as we called his name into the ever deepening gloom and stopped strangers, me with the odd sob. 7pm it was dark and no Oscar.

We often stay at the flat at Port-Vendres when Oscar goes into kennels (it is much closer than Caixas), we had left clothes there and, as we needed to eat, we decided to go to the flat and drown our sorrows at our favourite restaurant, La Tramontane.

Parking near the flat, I picked up Oscar’s lead, saying to Frank “no need for that” and then out of the corner of my eye I saw a familiar tail.

In disbelief, I raced across the road, grabbed Oscar who was sauntering along, quite unconcerned, and looking as if he was going into the Tramontane (which is opposite the carpark) for his dinner!!!

Which, in fact, was what all three of us did.

So how did he do it? The kennels are 14 km from Port-Vendres along major roads.

Why go to the flat? We hadn’t been there before taking him to kennels, so why did he think we’d be there?

What would he have done if we hadn’t turned up – head for Caixas? Was it all by chance? It’d be nice to know.

We do know that the owner of the Tramontane had seen him earlier and wondered why he was “out alone”. We also now know that the kennels (who didn’t charge us!) habitually let him sit in the office with them and it was from there that he escaped – sadly, he’s blotted his copybook with them, he’ll be under secure lock and key from now on!

By the way, he’s now curled up in front of the fire, gently snoring and looking very unenergetic, quite his normal self, in fact!

The 2010 escapade occurred while we put Oscar in kennels to allow us to go to England to see a Heineken Cup rugby match between Perpignan (USAP) and Leicester Tigers.

Exactly a year later, in January 2011, we put Oscar back in the same (excellent) kennels while we flew to Venice, again for a Heineken Cup rugby match between Perpignan and Treviso (near Venice).

Imagine our surprise when, checking for messages on our home answerphone, there was a message from a vet in Argelès saying that there was nothing to worry about, but Oscar had been found on the road in Argelès and handed in to them, so would we kindly go to reclaim him!

We called and told them we were in Venice, but Oscar should be in the kennels. The vet contacted the kennels and he was returned.

Oscar had climbed out of a kennel with 2.2 metre high walls, got into the kennel owners private garden and strolled off!

We have no way of knowing if he was heading for Port-Vendres, but we are beginning to think that he thinks that each January he will be given a new challenge.

Before his visit to the kennels this time, a friend had jokingly said we should search him for hairpins, files, rope ladders and any other lock-picking and prison escape aids.

At least, we thought it was a joke!

Oscar died very peacefully the day before his 14th birthday – he did well. One of those things that you expect but still comes as a bit of a surprise.

After our long trip to New Zealand, when Oscar stayed with Penny’s mother in England, we noticed how he seemed to have aged – probably not seeing him for several weeks made it more obvious. He did settle back to normal, just more elderly, finding it hard to get up stairs etc.

After the New Year we got Beau, a two year old English Setter, and Oscar perked up and walked more often and further than in the last few years.

On the morning of Wednesday 29th February Oscar had a hearty breakfast, ate Beau’s leftovers, climbed the stairs to sit beside Penny and followed us around as usual.

Then, on a gloriously sunny afternoon, we went for one of Oscar’s favourite walks through an old vineyard. Oscar was perfectly normal, plodding along as usual, but on the way back he staggered and fell and couldn’t get up.

Frank fetched the car and we brought him home. He was conscious and responsive all the time but his back end seemed to have completely given way. We lay him in the conservatory and he didn’t seem in pain although his breathing was bad.

We wondered what to do as he was terrified of the vet, and we couldn’t bear the thought of giving him more angst by taking him there. So we decided to leave him, whilst he seemed painfree, at least overnight.

Frank took Beau for a walk, Penny stayed with Oscar and then his breathing became very laboured. Penny had his head in her lap, his blue eyes became glassy and that was it.

He was dead before Frank got back.

From the fall to the finish was just three hours.

As a friend said on hearing the news – “I was pleased to hear of the manner of his passing – if only all life could end as kindly.”