Walk the region with Ted Hiscock

This walk, very close to the town of Port Vendres, is a gentle exploration of 2 beautiful, wild and exposed headlands, separated by a deep but charming rocky creek; Anse de la Mauresque and combines a historical realisation with the ruggedness of the rocky coast and wonderful panoramic views. 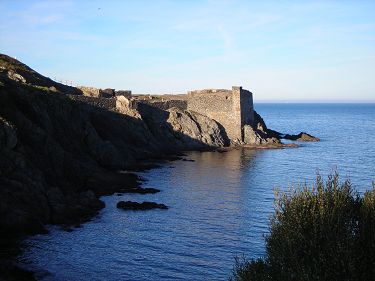 The route starts at La Place de l’Obelique, in the centre of the town.

Take the rough un-metalled exit (opposite side from the main entrance to the square), turn left and follow the road up to the junction in front of Le Dome and take a right towards Collioure, under the ‘Portus Veneris’ bridge. Continue for about 300 metres and then turn right immediately by the cemetery. This simple road leads to the plage d’en Baux, (where a footpath goes down to a pleasant cove) but our route winds round to the right.

By the side of the Rehabilitation centre (IME Mauresque) a simple footpath is marked with a yellow flash, which takes the perimeter of this centre, around a recreational court and then heads out towards the headland Cap Gros.

Scattered amongst the rocks and wild flowers are mementoes of the Second World War. Despite being in Vichy France during the last war, Port Vendres was occupied by a substantial German force, who after 2 years of feigned occupation, in 1944 destroyed the harbour.

The headland Cap Gros still bears the scars of military installations, which half a century on, are a savage reminder of wartime in this area. It would seem these decaying concretions are left as a memorial to the hard times experienced in Port Vendres during the early 1940s.

There is a strange peace about this panoramic view-point, which is further endorsed out to the point where the Batterie de la Mauresque is found.

This interesting ruin in first mentioned during the reign of the Kings of Majorque, (1292) and then late in 1700, formed the basis of a battery by the famous military engineer Vauban, when Spain and France were at each other’s throats over the frontier. 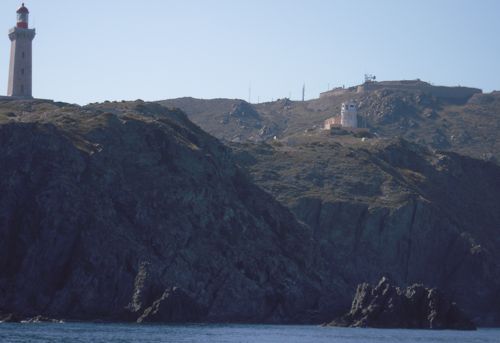 It is worth spending time enjoying the views to Collioure and beyond, to Tour de Madeloc and then to appreciate the full extent of Port Vendres’ charm from the tip of this headland. Take the footpath back along the edge of the cove Anse de la Mauresque, where a token to Charles Rennie Macintosh marks the site with a copy of one of his drawings in the 1920s of the crumbling fortress.

Within a few metres, a simple footpath drops down to the cove, (a favourite spot for rock diving), and then beyond, taking the footpath up again along the edge of the second rocky headland; Fanal. Follow this path across the headland to its highest point and the views across the bay to the steep hills of Fort Bear are well worth the effort.

The path then drops down to civilisation with steps down to Rue la Miran. A detour to the left leads to the lighthouse at Redoute du Fanal, (a further reminder of Vauban’s magnificent military engineering at the end of the 17th century).

DRetrace back towards Port Vendres along the Rue la Miran and then very soon on the left, overlooking the Criee de Poissons, is a charming quiet memorial garden Square Henri Bes Jardin de l’Abatoir, sacred to the memory of the inhabitants of Pyrenees-Orientales who died in the almost forgotten Algerian War.

On leaving the memorial garden head back towards Port Vendres but if the Criee de Poissons has not already been explored, it is worth another detour down the next left turn and into the area that is fenced off. There is a legitimate footpath for pedestrians that weaves between fishing boats being repaired and wagons rushing out with fresh fish.

Follow the official footpath round the buildings and the fish market and new oyster bar will be found. This is a truly magnificent experience for fish lovers; everything imaginable for the palate – for the adventurous, try oysters and Collioure blanc! 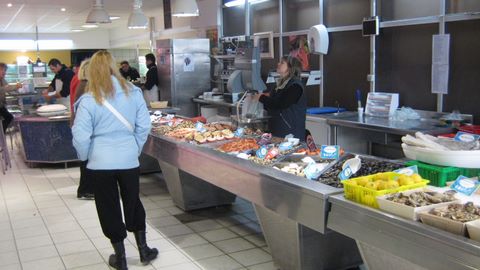 After the excursion to the fish market, the journey back to La Place de l’Obelisque is very simple, either along the quai du Fanal, (lower road) or by returning to the upper one, where once again a token to Macintosh demonstrates another favourite view he painted in the last few years of his life.