When the saints go marching in

Although France has been laïque (secular) since 1905, there are a huge number of festivals and traditions based around the lives, accomplishments or remarkable events that happened to various saints.

Some are well known, others not so much, but one thing is for sure, les jours fériés play a huge part in P-O culture.

Commemorating the departure of Mary from this life and the assumption of her body into heaven, l’Assomption is celebrated by Catholics throughout France. This religious festival became a public holiday in the 17th century under King Louis XIII. In 1637, having been married for 20 years and still without a male heir, the king asked his subjects to host processions across the land in honour of the Virgin Mary, in the hope that she would grant him a son.

The very next year, in 1638, Louis XIV was born and the date became a jour férié.

Non-Catholics also enjoy a mid-summer celebration on this date so whatever your beliefs, there will be plenty of entertainment for everyone.

Each town and village celebrates its own patron saint, usually held over several days, with music and dancing, fireworks and some or all of the traditions below.

Circles within circles,  hands raised and joined together, small, precise steps……but don’t be fooled. This ‘hokey cokey’ style dance may look like a sedate bit of hop, skip and jump but requires effort, and muscle control and coordination. Music for the sardane is played by a ‘cobla’, a band of 11 people, including 10 wind instruments and a bass.

Franco resented the Catalan national pride and desire for independence. When he enforced bans against certain aspects of Catalan culture, the dance quickly became a powerful symbol of national unity. Today the Sardane is danced in villages and towns throughout Catalonia, by Catalan and non Catalan alike, and is a great way to make friends and take a little exercise at the same time.

Meaning “fire runs”, this spectacular shows of devils and fireworks represent the fight of good against evil. Dressed in red and black, wearing horns and masks, ‘colles de diables’ (groups of ‘devils’) dance amongst the crowds accompanied by loud music, waving  sparklers, firecrackers, and roman candles, spitting fire into the crowd.

Leave your health and safety training head at the entrance! Amongst other useful advice during a correfoc, the Generalitat de Catalunya suggests “If by any chance your clothing catches fire, throw yourself on the ground and roll over to put out the flames. Above all, do not run, as this will spread the flames and make them burn more fiercely.” 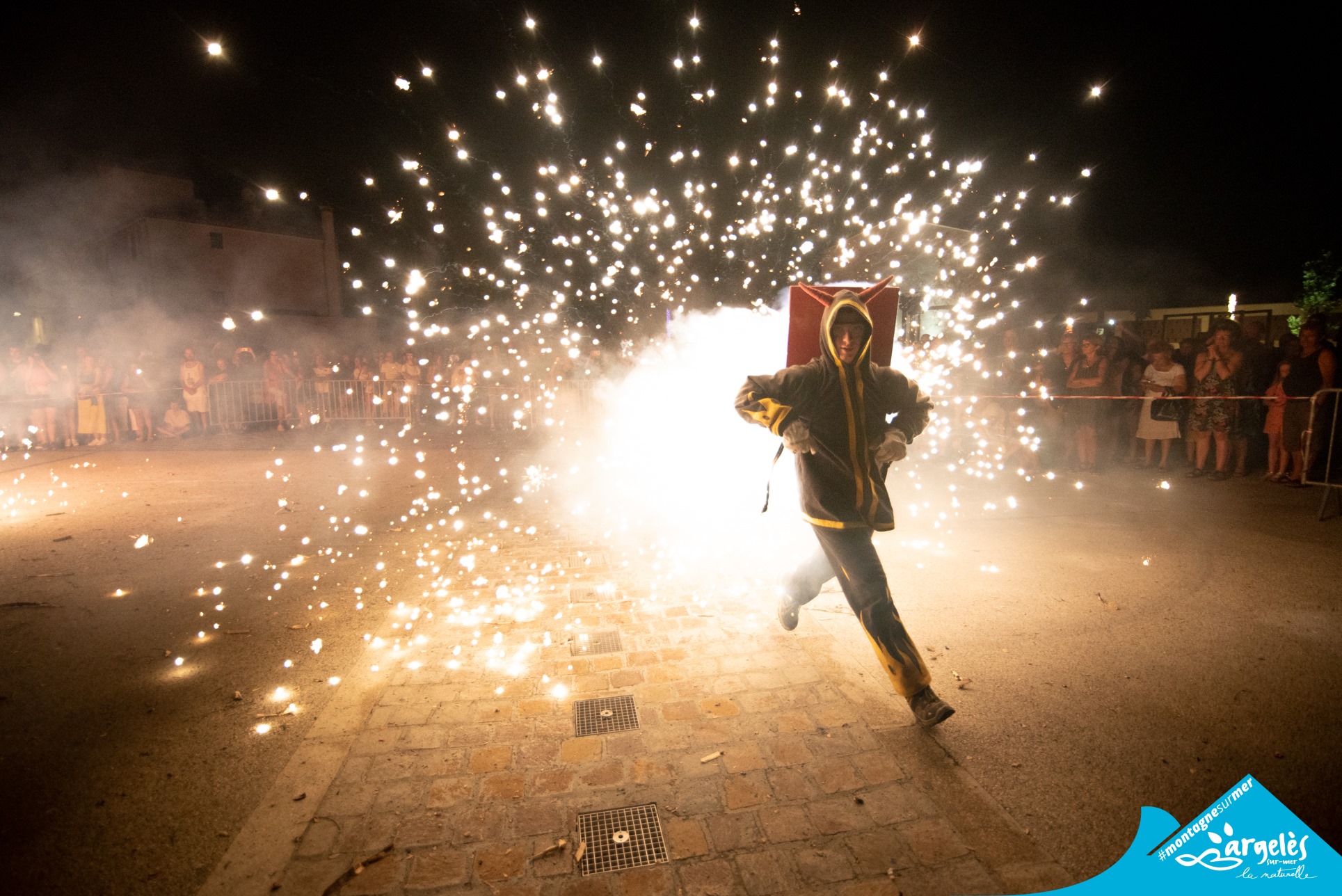 The casual observer may not necessarily be aware of the skill, discipline and organisation that goes into the building up (and taking down) of these human pyramids, but stand around the base or ‘pinya’ of a ‘castell’ before the human tower begins and you will hear the ‘castellers’ – usually made up of men in this first tier –  working out angles and distances in the same way that foundations are planned for building works.

Once a strong base is formed, the rest of the castellers must shimmy up to the top very quickly, as the strain on the levels below, and particularly the pinya, can be enormous.

The tower is only  complete once the ‘anxeneta’, often the youngest and lightest child,  climbs into place at the top and raises one hand with four fingers erect, in a gesture said to symbolise the stripes of the Catalan flag. 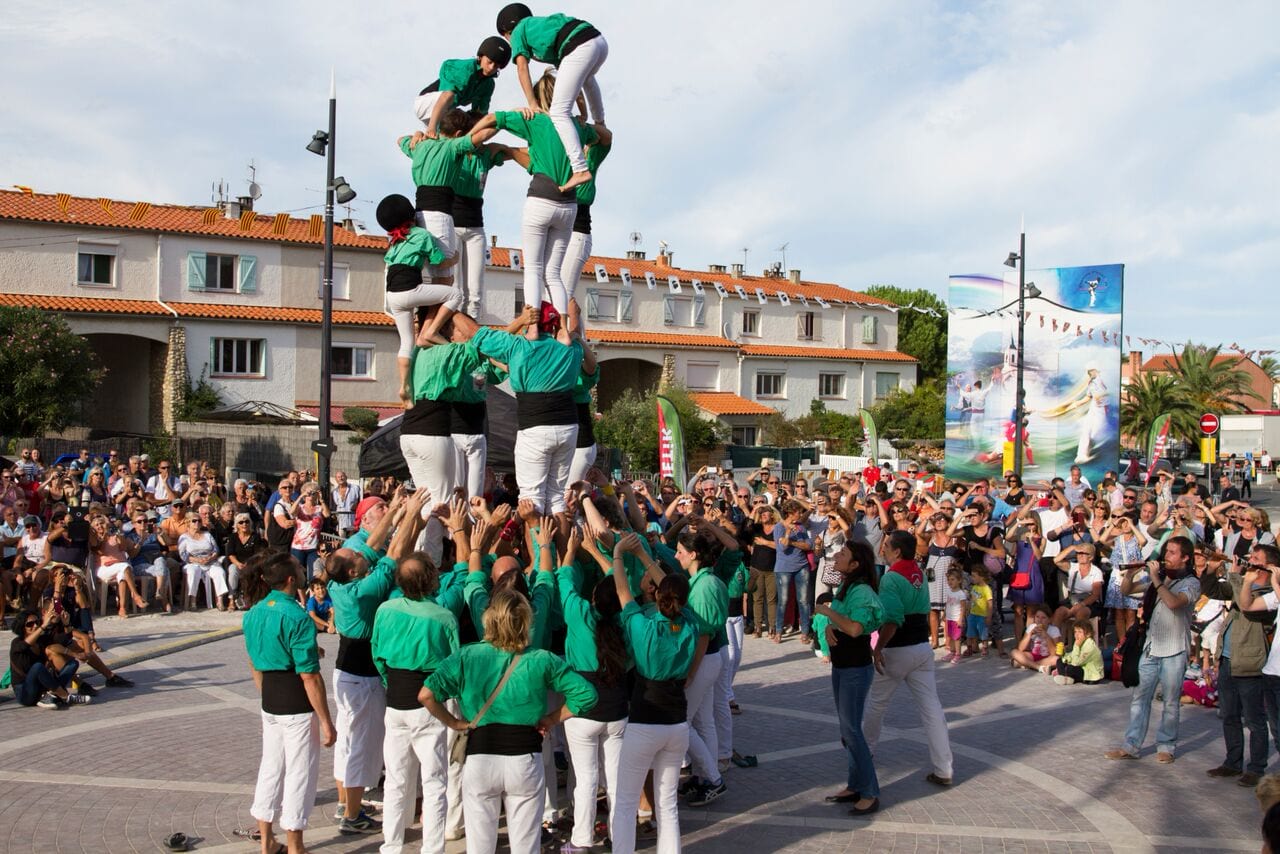 Find out more about the Festa Major here.

Every year, on 30th July, the procession of the Rodella leaves the church of Montbolo at 7h, heading down forest paths towards Arles-sur-Tech. They carry the Rodella, a coil of beeswax in a spiral around a cross stitched with flowers, offered in thanks to the Saints Abdon and Sennen, who saved their village.

In 1465, a Montbolo shepherd witnessed two witches arranging to bring some particularly bad weather to Montbolo. Abdon and Sennan blocked their path,  forcing them to send the bad weather elsewhere, and the crops were saved.

Entertainment in the streets, holy water is distributed from the Saintly Tomb and you can even buy mini Rodellas, your own personal storm repellant!

Every year, towards the end of September, Argelès-sur-Mer pays homage to its patron saints, Saint Côme and Saint Damien, twin bothers born in Syria in the third century, both doctors, who cared for the sick free of charge. Arrested and beheaded during the persecution of Christians, they were later pronounced martyrs and became  patron saints of barbers, doctors and pharmacists.

According to legend, Argelès was struck by plague in the 17th century, an epidemic which disappeared on 27th September 1652 – the feast of the martyred twin brothers. Villagers made a vow to  honour them every year in thanks.

This festival was first celebrated in 1701,  when the relics of St. Vincent, patron saint of Collioure and former local fisherman, were returned to Collioure where he was allegedly tortured and martyred for his faith. Taking place around the third week of August, numerous festive events have been preserved including water based  games and competitions  such as the ‘ronde du clocher’ (swimming around the port and bay). Demonstrations of Catalan fishing boats, street parades, concerts and fun ‘procession sur la mer’. 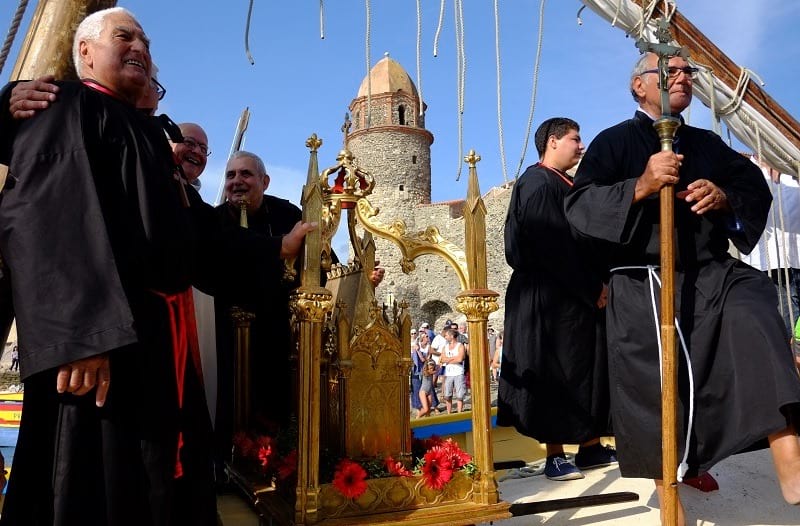 Saint Jacques was one of Jesus’ apostles, linked to the Santiago de Compostela pilgrimage because of his roadside evangelising. Tradition (which dates back to the time of the Visigoths) claims that by celebrating Saint Jacques each July, he will bring good harvests and protection to Canet en Roussillon. The town has been a stopover for Santiago de Compostela for many years, with bedding provided in the church for pilgrims.

The link to the P-O, though, is that as a former fisherman, Pierre is the patron saint of net-makers, shipbuilders, fishermen and the sea. As such, most of the coastal towns will celebrate him in one form or another.