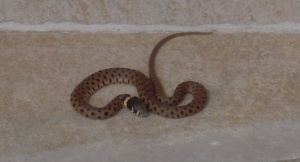 Nake! There’s a nake on my step and Olivier is working!! It looks vicious! I’ve taken a photo of it (from a distance – it was clearly poised to pounce!) and have banned poor blind Bisou from leaving the house until it has slithered slimily away. Mustn’t panic – but you can be sure that you haven’t heard the last of this!

The foul fellow is gone, but I think I actually felt happier when I could see it – at least I knew where it was!! Olivier is boyishly disappointed to have missed it and has been round searching under plantpots, with me following behind pulling on his T shirt, expecting to hear a hissing followed by a coiled strike any minute. Anyway, a little known but very knowledgable snake expert from the Charente has suggested it might be a Ringneck. According to t’Internet, they grow up to two feet long, are bluish-black in colour, with a yellow or red ring around the neck, and a matching belly, and aresociable. OMG, does this mean it popped in for a pre lunch drink? I consider myself to be a fairly sociable person but there are limits!

More info…. they mate in the spring and lay eggs in June and July, eat a wide variety of animals including earthworms, insects, slugs, small snakes, lizards, frogs, salamanders, ants, other arthropods, and newborn rodents and …. wait for it…… they swallow small creatures whole. I am a small creature at 4ft 10. On the positive front, width-wise, I would be no easy swallow. Every cloud eh.

The day however improved enormously when we went up with friends to Can Joan, on the road to Pic Neolous, just outside Le Perthus. Not a nake in sight, great company, amazing, rustic restaurant, and a fantastic and enormous leisurely four hour lunch which I will tell you about in more detail tomorrow when I am sober (hic!). Problem is, pastis, muscat, aperos, wine, Banyuls, digestifs… as much as you want… is all included in the price. They don’t ask you if you want it – they just keep on bringing it, jugs and bottles to the table…. and I don’t like to offend and felt the need to make an effort (double hic!)

Olivier, who has never been a big drinker, made a valiant effort to make up for many alcohol-free weeks, as one of our friends did the driving, and is now lying in a heap in front of the telly, fast asleep, and snoring gently. Photos to follow of restaurant, and gentle snorer. 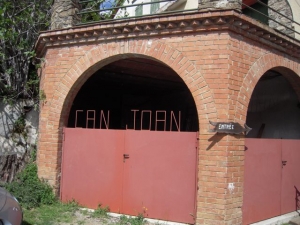 The gentle snorer has put his foot down on the publication of gently snoring photos, so I will make do with a few restaurant photos for now.

The Auberge Can Joan is in the tiny little hamlet of Saint Jean. Take the RN9 direction Le Perthus, turn off at the D71 just before Le Perthus, direction St Jean d’Albère and climb upwards amidst magnificent twisted cork oaks to this fabulous and authentic Catalan restaurant where dish after dish is placed on the table, accompanied by copious quantities of different coloured wines and alcohols. No menu of any kind was offered – the food just arrived, eggs mimosa, enormous plate of charcuterie, salad, grated veggies, other stuff…. 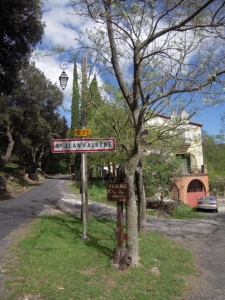 The only choosing was the main course, where duck, wild boar, or veal were proposed, all in hearty stew form. The service is relaxed and convivial, the food is typical home cooking, as you would imagine the farmer’s wife used to load up the table for family and workers when they returned from a hard day in the fields, and it’s open every day including Sunday!

The set up of the long dining tables means that you may well end up chatting to a dining neighbour and making new friends, due to both layout and the quantities of alcohol served, which oil conversation and damp down inhibitions rather nicely. The restaurant is large, with several big rooms, and was quite full, although we had a table to ourselves in front of an open fire, which fortunately was allowed to die down as the temperature rose and the red wine glow increased! 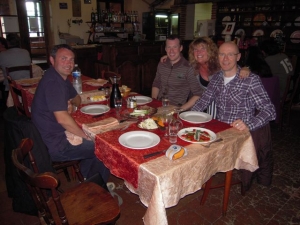 The single price of 27 euros is all inclusive, tho as we left we did notice a menu nailed to a tree which suggested a 22 euro menu – but nobody asked us….. and we all felt that it was excellent value for money, although the poor driver could only look longingly at the different coloured bottles and pretend.

A pukka review will follow, much deserved, and I would recommend this restaurant as much for the beautiful surroundings and atmosphere as the food itself.

Beautiful day today, with wedgewood blue sky, that uplifting light which is always such a great moral booster, and a promise of summer in the air.

I’d like to know why I’m getting all this diet spam suddenly. I’m feeling really victimised even though I know, deep down amidst the layers of puppy fat, that it’s not personal and they don’t actually know me.
’Moins 16 kg en 2 mois satisfait ou remboursé’ they tell me seven times in seven different emails or ’Cookie Diet products help you lose weight safely’ (yeah, right, I’m already on the cookie diet if that means stuffing yourself with loads of biscuits and chocolate…. and it’s not working).

I have accepted that I will receive a bundle of spam, as a ’webmaster’ with my email addresses clearly out there in the public domaine for anybody to harvest, but at least when I was receiving tempting viagra offers, I knew they had no idea whether I was male or female or what I looked like! With all the diet spam, (ha ha, there’s a joke there) I’m beginning to wonder. 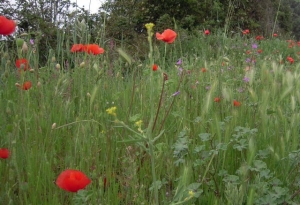 Very windy today, although quite bright as the cloud lifts off the mountains. Summer certainly hasn’t made it yet, and feels like a long way away. Poor old Olivier and Lucien (who is now working for his Dad) are way behind with their work, as the first couple of weeks in May are a total washout in France for small businesses. There are so many bank holidays – Thursday May 1st, (Fete du travail) Thursday 8th, (Victoire) Sunday 11th (Pentecote) – and many offices and small business ’font le pont’, linking a Tuesday or Thursday holiday with a long weekend…. and it can be really difficult to contact people, get work done or goods delivered.
Olivier, who spends a lot of time on the phone organising work to be completed, or people to meet, and finds it so frustrating. And then of course, you’re heading towards summer break so you need to get any work in very quickly before everybody stops for a month or two!! The weather hasn’t helped either – wind and rain are not good bedfellows for pool or project managers.

Having said this, I look back over past entries into my diary in May and find…

May 2008
Moody, unpredictable, changeable, erratic, inconsistent, temperamental, volatile……… no, I’m not talking about my 15 year old adolescent son, (although I could if you wanted a twenty minute rant!!) but about the Pyrenees-Orientales weather! It just can’t seem to make its mind up what it wants to be when it grows up. A hot sunny day? A dull and cloudy one? Spitty rain and lightning? Violent winds? Make up your bloody mind Mr Weather man – we’re all holding our breath in anticipation of summer which seems to be slightly constipated and squeezing itself through very slowly! 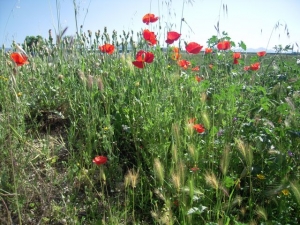 May 2009
Well, it’s May 1st and it’s raining with a chilly wind thrown in for good measure! Don’t care don’t care don’t care! The whole world has turned emerald green with splats of poppy red and dandelion yellow and once the sun comes out, late spring and summer will be fantastic as always.

Last day of May and it has ratted it down all day!

May 2010
Between snow, heavy persistent rain, cold and gusting winds, it would seem that the weather has completely lost its senses. There is snow on the Canigou – that’s still fairly normal at this time – but there is also snow on the Albères foothills just behind us, separating France from Spain, and that is quite rare. Have to say tho’ that everything is very very green after all this rain, the wild flowers are sparkling, looking dashing in bright fragrant colours of every shade, and the mountains have boldly dressed themselves in a hundred variations of green – pretty….but chilly! 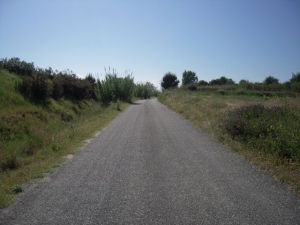 So although every May, we tut and shake our heads and ask what on earth is going on with the weather….. it’s fairly typical and a bit like childbirth in that we forget how bad it was last time and go into it again with high expectations!

Poppies and wild flowers are magnificent and not at all bothered about a little bit of wind and rain. That’s how we should all be.

Managed to get a short bike ride in along my favourite track from Maureillas to Argelès, tho didn’t get as far as I wanted, as a large white van with TPM painted on it passed me by, and the gorgeous driver offered me and my bike a lift home, on conditon that we stop off at the bad cake shop in Argelès and buy bad cakes, and take them home to eat with a cup of PG Tips. Irresistable offer and done deal.

Her Royal Hairiness had another fit this morning – so frightening to watch as she writhes around on the floor, frightened and keening and whimpering. Olivier though, IS THE MAN! He remained very calm and sent me running to grab the insulin from the fridge, while he soothed her and tried to calm her as you would a baby. My hero and absolutely the man to have with you in a crisis, whilst I am absolutely the woman NOT to have with you in a crisis. I love this little hairy girl so much, and watching her suffer breaks my heart – and paralyses me. I know I really have to get a grip, as she is 15, and long past her sell by date according to the vet, and one day it could happen when I am alone with her, but I am so pathetic and useless in an emergency situation. Sort yourself out woman!

Now, it has to be said that I am far from being described as green fingered. In fact, since we moved to this house eight years ago, I have pretty well managed to kill everything off that resembles a flower or a pretty shrub! Determined to change that, I finally got the weed-killer out this afternoon, and went round zapping everything in my path that didn’t look like it should be there – and booger me if it didn’t start spitting gently as soon as I finished, washing all my spray away! Hhhhhhhrump!

Weather a bit bof at the moment – warm and mostly dry, apart from when I went on the rampage with the week killer. At the cherry festival yesterday, it was similar, but rather pleasant to be quite honest, as in past years, sitting there with a hot sun pounding down on your head all afternoon can leave you with a bit of a sore bonce in the evening. Or is that the beer? Great to see the Castellers – human castles, of several layers, topped off with a brave child like a cherry on a cake!