I am now an artist, living in Ceret and Bristol, but have a chequered past.

I studied Archaeology and Anthropology at Cambridge originally, and wondered why it was that apes evolved into humans. I found myself studying Animal Behaviour for my PhD and subsequently taught concepts of behaviour in an American college, where we tried to understand human behaviour by analysing and making broad comparisons across species. 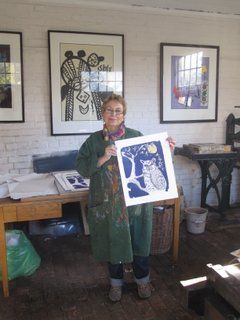 This may explain why, in my current art work, I tend to fudge the boundaries between animals and humans – or blend the two! It  marks a departure from my academic past and the factual accuracy needed for the research I carried out in the BBC’s Natural History Unit, or the 20 years I spent making films and writing intensely researched investigative pieces for magazines.

I am now liberated from such constraints and intent on leading a happy, creative life in Ceret and Bristol, where I did a  degree in Drawing and Applied Art on retirement and learned the printmaking techniques I now employ to lighten my emotions when the world is too gloomy.

A post-graduate diploma in Life Drawing at the University of Barcelona helped me capture the movement of dancing rabbits and chickens and make the world swing a little more.

I am a member of the Gloucestershire Printmaking Co-operative (GPC) based in Stroud, where I lived for 10 years, and helped run the first British national printmaking festival, Impress, in 2009 and the first Impress International Biennale in 2011. I am also a member of the Ex Libris Centre de Gravure in Ceret, with its magnificent studio based in an old mas in Rue des Capucins, funded by the town and available for all to come and learn some printmaking skills.

Every year we have a big exhibition in the Mediatheque, which we share with other studios. Last 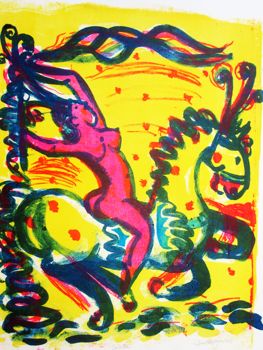 December we invited the Gloucestershire Printmaking Co-op to exhibit with us and are currently doing an exchange exhibition with them in Stroud.

My current exhibition is of stone lithographs, most of which I print in a specialist studio in Sussex, with master lithographer, Andrew Purches. Not many of us do lithos in the original, traditional way on large blocks of Bavarian limestone, although there is now a bit of a revival in the UK.

Having grown up in the Cotswolds, I enjoy working on limestone. It’s an exciting medium, each stone reacting differently and contributing its own distinctive influence to the print.

Here in Ceret I have a well-equipped studio for screen-printing and teach adults and children in irregular workshops. I think it’s the only public-access studio of its kind in the area. I also run regular ‘Jouer à l’Art’ sessions with young and old, which have proved exciting, exuberant and very productive! We will be holding our second annual exhibition this November (date to be announced). 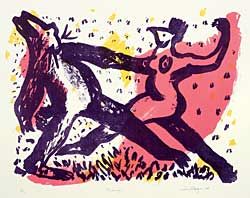 When I’m here, I open my studio on Saturday mornings and have a children’s class from 10.0 -12.00 (no age limit if the child ‘fits in’ with the others). The adult sessions are on demand. My studio, la Poule Bottée, is on the corner of Place de la Liberté and rue Aristide Maillol, behind the monument Maillol.

My exhibition of lithographs is at the new and wonderful Le-Chien de Pascale, Bar à Jus, in rue Joseph Parayre, between the Musée d’Art Moderne, Céret, and the Bleu Citron café. It’s open from Wednesday to Saturday from 10.30 – 6.30 and on Sundays from 10.30 – 3.0 pm. The exhibition runs till September 19th. The lunches are gluten free, if you ask, and the juice cocktails, made on the spot from fresh veg and fruit, are utterly delicious!