Basil Howitt was enthralled by the eccentricities and fanaticism of pétanque players. 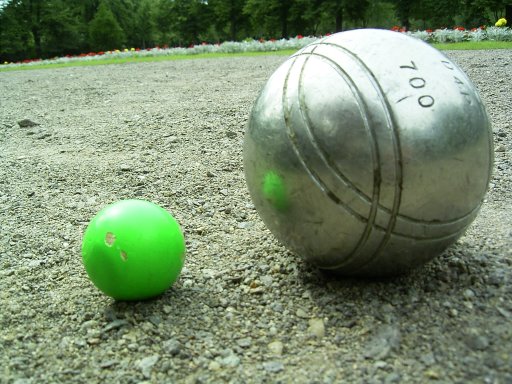 Pensively we drink a glass of pastis, we bend the knees, the ball goes up in the air with a long curve, it falls on the ground and rolls with a gentle screech to the place where it stands still”.
Marcel Pagnol.

… the most fanatic men that can be encountered among the sectarians of any faith …
Balzac on boules players – from Ferragus, Scenes from Parisian Life, 1833

The proof that God is a friend of boules players is that the leaves of the plane trees are proportionate to the strength of the sun.
Marcel Pagnol (autobiography: Le Temps des Amours, 1977) 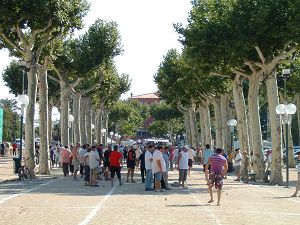 The strength of the sun was certainly blistering on the afternoon of 5th August.

I was looking in on the final day of the 33rd Nationale de Pétanque Rivesaltaise, Rivesalte’s annual and highly prestigious pétanque tournament.

If you’ve never been there, Rivesaltes is a dynamic and very loveable, if rather scruffy town (pop c.8,000) a few kilometres north of Perpignan.

It is known across the world for its famous fortified sweet muscat wines, if for nothing else. Apart, that is, from the shamefully moribund “Perpignan International Airport” that happens to lie within its commune.

I know Rivesaltes quite well because we have a small maison secondaire in a narrow street close to the town centre. The mayor, incidentally, André Bascou is highly respected, having been re-elected continuously since 1983.

Technically we were not on that August day in the middle of a canicule or heat wave, though it felt like it.

Surprisingly, there has been no official canicule in the Pyrénées-Orientales this summer, though some neighbouring areas have suffered, including the Rhône and Provence.

For Méteo France to declare an official “level-three heat-wave alert” (“vigilance orange canicule de niveau trois”), there has to be three consecutive days in which the minimum temperatures are 23°c and the maximum 35°c.

This Rivesaltes tournament – indisputably the most important one in the département in spite of others held in nearby Le Barcarès, Céret and elsewhere – was sponsored by the Conseil Municipal, the Conseil Général, local businesses and other organisations.

Some 1,000 competitors were taking part on 180 allocated playing areas. They competed in triplettes for a prize of 4,600€, or in doublettes for “le grand prix de la ville de Rivesaltes” of 1,500€. (Triplettes involve 3 players on each side using 2 balls each; doublettes have 2 players a side using 3 balls each.)

The finals were played out on the Allées Maréchal Joffre – the long promenade lined with plane trees between the imposing mairie at the top end and the magnificent bronze statue of Maréchal Joffre on horseback at the bottom. (The Maréchal, one of France’s WW1 heroes, remains Rivesalte’s most illustrious native.)

The competitors came from all over France and well beyond – though judging by the torrents of guttural patois and the battered brown faces many seemed to hail from Provence, the original home of pétanque as we now know it.

On that afternoon in August, the Allées Joffre were heaving in spite of the boiling, heavy heat! The faint, humid sea breeze (the dreaded marin) barely wafted away the sweaty smells and cigarette smoke of so many men mingling together under the ferocious sun.

Those who were not actually playing were trying to edge their way to a vantage point where they could watch the games – both the official tournament within makeshift tiered benches (too low and rickety for a man of my build to mount) and the many informal games taking place everywhere else.

This version of the game originated in the town of La Ciotat, between Marseilles and Toulon, in 1907. It is, of course, the game you are most likely to see on your trips to France, where it is reportedly played by some 17 million enthusiasts.

A further 3,000 play the game in England, not to mention smaller though equally fanatical numbers in Denmark, and elsewhere.

An earlier version of boules was jeu provençal where players took three steps before throwing a ball. Pétanque is deliberately more sedate, to accommodate the rheumatic and the disabled. Players stand still (or can even sit in a wheelchair) within a circle drawn by the first person to bowl from a new end.

. I won’t insult the many readers who know far more about boules than me by repeating them all here.

What makes the game so exciting – and frustrating – is that nothing is decided until the last player plays the last boule. If he or she moves the cochonnet or jack, or knocks an opponent’s ball out of the way, the score may change dramatically.

Most experienced teams contain a pointeur who specialises in placing the ball close to the cochonnet and a tireur who is adept at wrecking the opposing pointeur’s careful placings.

If I had forty quid to lash out I wouldn’t hesitate to buy from Amazon a copy of Pagnol’s and Marc Allégret’s film Fanny (1933).

There is a hilarious clip from the film  in which a crowded tram in Marseilles is blocked by a game of pétanque whose players are far too absorbed in the life-and-death intricacies of the match to give way.

Finally, fanny has a ribald connotation in pétanque. “It is traditional that when a player loses 13 to 0 … “il est fanny” (he’s fanny) or “il a fait fanny” (he made fanny), and that he has to kiss the bottom of a girl called Fanny.

Since there is rarely an obliging Fanny’s behind handy, there is usually a substitute picture, woodcarving or pottery so that Fanny’s bottom is available.”

As well as all the bottom kissing, folks, it’s drinks all round on the losers! You have been warned!