Thank goodness for the internet, I thought. Hubby was going to the UK for a week, so that he could have his teeth fixed by a dentist he could actually communicate with. The strong-armed dentist in Barcelona had done a great job but he tended to say things in Spanish and all hubby could reply was ‘si’, so it wasn’t a good idea, on the whole.

I was left to hold the fort, and to look after the cat, the dog, nine sheep, three new chickens and a whole load of wildlife I preferred not to think about. Looking after Mas Pallagourdi and its inhabitants kept me pretty busy all week but chickens aren’t hot on conversation and the dog only cared about his dinner.

It was near the end of the week when my neighbour stopped his car as I walked past with Gyp. He and his girlfriend jumped out; this was unusual so I knew something serious was afoot.

“All your sheep have scabies,” he said cheerfully. 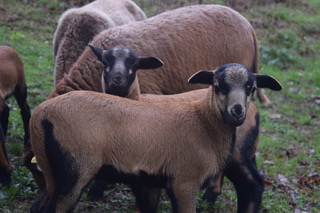 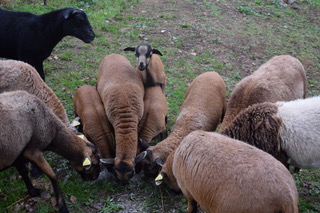 “What? That’s ridiculous, I only looked at them an hour ago and they were in perfect health!” I didn’t say this, obviously, as it is far too complicated in French, for yours truly at least, so I just smiled weakly. My neighbour was just getting into his stride, he mimed using the telephone and said I must telephone the vet immediately.

“Just a case of an injection,” he continued.

“Yes,’ the girlfriend said. “An injection in the bottom.” To prove her point she bent over and slapped her own behind enthusiastically.

“No, no,” the neighbour said, tapping the side of his neck. “An injection in the cou. Easy, simple. But you MUST telephone the vet.”

“Yes, yes,” I replied, a little impatiently, I had got the point. “I’ll go home and take a look at them.”

“Non! my neighbour repeated. “You must ring the vet. Tout de suite!”

When I returned home I summoned the sheep by rattling a bucket of food. They gathered around me, sniffing my fingers and treading on my feet. They were a motley looking lot, in the middle of losing their coats. It must have been the unsightly tufts of hair sticking out that had convinced my neighbour that they had scabies. Of course, this now meant walking up to his farm and attempting to explain the situation. I took the easy way out, I put a note through his post box and for good measure put in a DVD on rugby that I thought he might like.

That evening on Facebook a friend who lives in the PO and who refers to her place as ‘le Bout du Monde’ wrote that her excitement for the day had been a neighbour delivering a plate of food and two schoolchildren knocking on the door to sell raffle tickets.

I can trump that, I wrote. The only human interaction I’ve had is my neighbour informing me that my sheep have scabies.

Ah, she replied. Looks like you’re in competition for the title of Le Bout du Monde.

CLICK HERE to read 'Letting Go of Love' Marian's first novel based on the lives of her grandparents during WW1.
[/vc_column][/vc_row]