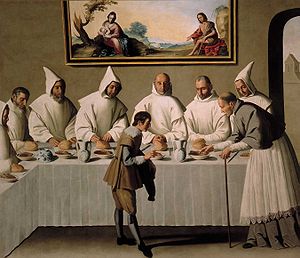 There are at least 620 of them across France’s 26 régions. I’m referring to the formally constituted confréries or brotherhoods of men whose common purpose is specifically to proselytise the summum bonum in eating and drinking. Each confrérie worships at the altar of its own particular gastronomic idols, ranging from the finest wines through to the humblest (though delicious) pigs’ and calves’ trotters.

Is there any other country in the world that takes its food and drink this seriously? This is not a rhetorical question. If you know of one, do write in and let me know.

Originally the remits of some confréries, always led by a Grand Maïtre or Grand Master, were more exalted, including all aspects of doctrinal belief and devotion to particular saints.

To look at some of these foodie confréries today in their full ceremonial regalia – at initiation ceremonies for example – you might almost think you were at a cathedral ordination. The richly embroidered gowns, cloaks, talbards, tunics, chaperons (hoods with short capes), bicorne hats, tricorne hats, white gloves, sashes and other trappings – all these smack of the sanctuary, the chapter house and the cloister. Even the very meetings of the confréries are always referred to as ’chapitres’ or chapters.

Here is a far from exhaustive list of gastronomic goodies revered by individual confréries:

Focussing now on our own région, some of these confréries go back a long way. The oldest I have discovered so far is L’Antiqua Canfraria de Sant Andiu de la Galiniera. It was devoted to wine, founded in 1140, and is still going strong. Also dedicated to wine, La Commende Majeure (the Grand Order) du Roussillon, was founded on 26 July 1374 by Jacques 1st of Majorca, its privileges later ratified by Pedro IV of Aragon. In 1592 Les Amis du Vin began convening to taste the finest wines at the family auberge of one, César Sanquette, near La Chamberte in Montpellier. Similarly The Order of the Strictest Rules in Wine Tasting is one of the oldest confréries in the Gard.

Each of these and many other confréries had their own richly colourful uniforms, medallions, banners and, especially, diplomas. Those invited to enter the order were submitted to “stringent” though good-humoured tests in eating and drinking at each annual Chapter Meeting. Invitees came from many walks of life outside gastronomy, including literature, art, music, politics and economics. Distinguished foreigners were also invited to join.

Even your humble correspondent was honoured, way back in 1992, to be made a Compagnon Vigneron de Trémoine at Rasiguères. I had finally satisfied the confrères of my stamina in consuming significant quantities of rosé over 10 years at the village’s annual Festival de la Musique et du Vin.

In case you are wondering if there are any formally constituted consoeuries or sisterhoods, there are a few on the internet. However, as you will see in the video further down, women are definitely eligible to join at least some confréries – though I have yet to see a female Grand Maïtre!

Here are a few individual confréries close to home in the Pyrénées-Orientales.

Catalans are addicted to that humble gasteropod le petit gris (Helix aspersa) – a gasteropod being a mollusc whose means of crawling along is by means of an organ of locomotion attached to its stomach. The other kind of snail eaten further north is the escargot de Bourgogne (Helix pomatia), most often baked with lashings of garlic and butter.

The striated petit gris of which we are so fond is “26 to 39 millimetres long” and is to be found not only in the Languedoc-Roussillon but also in Brittany, Provence and the Charente (regional capital Poitier).

As charred remains show, les petit gris have been eaten since prehistoric times. Their natural habitat is grassland and undergrowth, but they have been bred for the table since Roman times in escargotières – a useful development since they can be ready for eating in only a few months after being cosseted on vegetables and crushed cereals.The Celts ate them as a dessert, whilst in the middle ages they were eaten fried, boiled or even in brochettes. They were particularly valued by sailors because they took up little space and could be eaten fresh on long voyages.

“The snail capital of the world”

A snail-based festival is called a cargolade in which the animals are grilled over the embers of vine roots and then swallowed with a “gloup”, with lashings of bread, aïoli, and rosé or rouge to go with them. Undoubtedly the grandest cargolade down here is held each year, over three days at the end of July, in Bompas, “the snail capital of the world”. I haven’t managed to make it there yet but very much hope to this year.

The quantities consumed are staggering. In one recent year, 160,000 snails were reportedly consumed over the three days by 4,000 “convives” or guests – along of course with the wines, bread and aïoli. All this in a context of endless razzmatazz – sardanes, pop music, and all the fun of the fair.

You can see here an initiation ceremony for novices aspiring to join the Confrérie. Connotations with religious services are obvious:

Once having been accepted, the novices become full brothers and are decorated with l’E.S.C.A.R.G.O.U.L.A.D.E. This is a mnemonic for the Eminente Société Confrériale d’Amateurs Réputés Gastérophage Obstinément et Unanimement Liés par l’Amour De l’Escargot. I’m sure the general sense of that is apparent enough!

Incidentally there are many openings for snail breeders prepared to spend a lot of time acquiring the necessary skills, equipment and habitat. To give you an idea, France consumes 40,000 tonnes of escargots annually, whilst producing only 1,500 tonnes.

Formed only last year in Sahorre (south west of Vernet-les-Bains), this brotherhood is fanatical in its enthusiasm for black and white puddings – whose ingredients include pigs blood, pork fat and spices – all very slimming and cholesterol free! In fact a possible origin of the word boudin (boutifare in Catalan) is boudine, meaning fat belly!

The brotherhood is sure to develop a huge following, because I have friends locally who – to the dismay of their wives – insist on eating boudin every night of their lives after the ritual bowl of soup.

“gratified the gathering with a well-researched speech on the name of this precious item of charcuterie. [The applicants] then overcame with success the two terrible trials inflicted in them by the Master Tasters and Cupbearers.” (We are not actually told what the trials were!)

Finally, having been reminded of their duty to “defend, promote and develop” the sacred boutifare catalan, the new confrères were each decorated with the medal of “sergeant of the confrérie”.

Then everyone set to: making black puddings, grilling them and eating them, washed down, naturally, with the usual lubricants.

The postulants were no less than Juli Soler, sommelier at Ferran Adrià’s restaurant El Bulli at Cala Montjol (Roses), and Josep Roca, sommelier at the restaurant Al celler de Can Roca in Girona. El Bulli, of course, that “laboratory of molecular experiences”, has often been described as the world’s best restaurant.

they had to sing a drinking song at sight;

then uncork a bottle “impossible to uncork” – the sommelier’s worst nightmare;

and finally endure three “tastings” of Banyuls’s “piquettes” (oxidised plonks?), before comforting themselves with a large glass of “nectar banyulenc” (the heavenly dark sweet stuff).

Entering fully into the spirit of the occasion Juli Soler declared the plonk offered to be “a vinegar too young and too green”.

The successful postulants were then presented with the vignerons’ pick and basket, their red and gold waistband and, of course, a diploma.

All good clean fun – and of course fantastic publicity for the Banyuls wines.