The wrought iron balustrades that hubby had ordered from the local ferronnier at massive cost eventually arrived and he started the job of trying to hoist them into position on the balconies. He strapped a rope around a kind of hook that was protruding from the interior wall of the lounge in The Other End. I was given the job of watching it from indoors, while hubby whizzed to and fro outside, making sure it stayed level as he hoisted it upwards.

I screamed as the rope bounced off the hook and the railings crashed to the ground, narrowly missing hubby’s head. I was sure that by now he had used up all nine lives and I was able to persuade him to stop the job. However, I was away that weekend in the UK. On my return, mysteriously, the job was done. I didn’t ask any questions.

In a previous entry in the Ceret Diaries I had explained how various plumbers had been and gone, leaving hubby to wrestle with instructions in Italian and a very complicated woodburner. With the help of Google Translate, he had eventually put the thing together and plumbed in a number of very big radiators that we intended to use to heat the Barn, the Yoga Studio and The Other End. The control panel for this monstrosity was enough to overwhelm an astronaut, and the thing itself consumed a forest per hour. But it was installed and I was pleased that from now on I would be able to teach yoga classes in the Yoga Studio during the winter months. 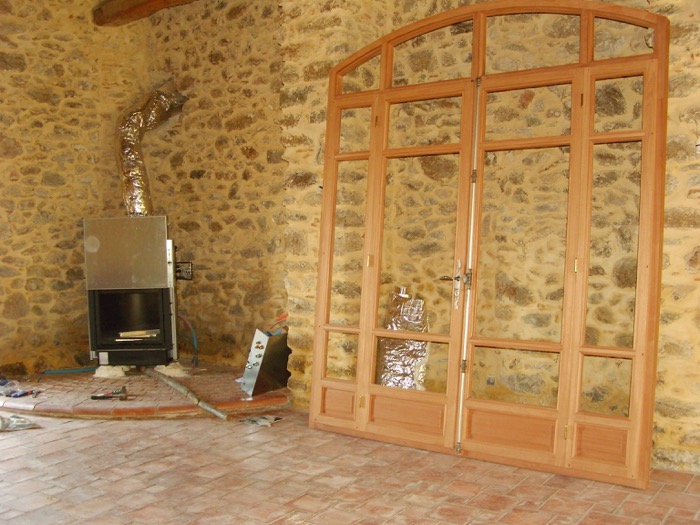 For the first yoga session I had hoovered and polished the studio as usual and at first light we loaded the woodburner with some large logs so that the room would be warm by 10. At half past 9 I was busy preparing for the arrival of the yoga students, lighting candles and putting on relaxing music, when an alarm bell went off (and not in my head). It sounded something like a car alarm only higher pitched. I’d never heard it before and had no idea what it meant. The next minute a cascade of boiling water gushed from the ceiling of the Barn onto the newly tiled and grouted floor. The Barn floor was rapidly filling with hot water, steam was enveloping me and hubby was nowhere to be seen. I continued to scream in harmony with the alarm. When hubby eventually heard the hubbub and arrived on the scene he pulled some logs out of the woodburner and the thing calmed down. For one of the joints he had used plastic instead of metal and under the extreme heat the thing had given way. After some frantic mopping on my part, by the time the first yoga students arrived everything looked calm and normal.

At this time Lumberjack Andrew often turned up with his lovely wife and three children. Over a cup of tea and a slice of cake we coaxed him into telling us more stories. In his soft, cultivated accent he told us the story of the Madonna.

“When I was a child,” he began, ‘my father was the rector in Windsor and we were as poor as church mice. No money for carpets or that sort of thing. Well, one day, Lady so-and-so, the lady of the manor, knocked on the door and handed my father a small parcel wrapped up in brown paper and tied with string. “It’s a little thing I found in the attic,” she said. “I don’t want it so you might as well have it.” After she had gone we opened the package to find a small statue of the Madonna. We put it on our sideboard and didn’t think any more about it. Well, a while later someone called at the house. He admired the statue and said we should get it valued. My father eventually took the statue to Sotheby’s and it turned out that this was a very rare and valuable thing – let’s say it would have kept us all for the rest of our lives. I couldn’t believe what happened next.”

“What?” we all said. Andrew’s children were staring wide-eyed at their father and we all held our breath.

“The bastard! He gave it to the church! It went into the local crypt and has been there ever since. I couldn’t believe it!”

Later that summer, due to the difficulties of providing a suitable diet for the llamas, we took the sad decision to sell them. Well, that’s really the Royal ‘we’. As I have explained, I had been spending many hours literally crawling up and down rocky slopes, installing fencing so that the llamas could use various bits of our neighbours’ land. As usual during the summer, I was in a bad mood and I’d had enough. Before hubby could change his mind I rang Rosemary of Ecoferme (remember the stuffed weasels and owls in their kitchen?) She was delighted to buy them back at the ridiculous price I offered — about half their value. She and her father turned up just a few days later. We were horrified to see all the goats stuffed into a box in the back of their car, and all six llamas loaded into the horse box. As we saw them leave, it felt as if we had sold our family down the river. But we knew Rosemary would look after them well and find good homes for them. For ourselves, we hoped that from now on, life would be easier. Later that month we were at a party when a friend enquired how the llamas were. I replied that we had sold them. “What about Bill’s dream of walking over the Pyrenees with them?” he asked.

“I know, very sad,” I said, with as much sincerity as I could muster.

By Christmas the flooring was completed in The Other End, and Howard, Neil and Alex finally packed up their old wheelbarrow, cement mixer and scaffolding and we listened, with some regret, to the clanking and banging noises gradually fade away into the distance. Although I had moaned at some length about having to provide tea and biscuits (if not doughnuts, English only) 24/7, I would miss the crew and the banter.