One day in the early summer of 2008 we had a phone call from our friend Jo. One of the Association llamas had not been seen for three days and could we join in the search party? Of course we were happy to oblige and we met many of our new neighbours for the first time as we all fanned out over the steep mountainside looking for the missing llama, a beautiful white three-year-old called Bolero.

Sadly, Bolero had only just died as we came across him, and then we had the task of carrying a large, heavy animal up the mountain. It wasn’t the most conventional way of meeting one’s new neighbours but it was a bonding experience — it certainly broke the ice!

A couple of hours later we were sweating and feeling very tired as we wondered what should be done with the animal. The authorities were notified and we learned that Bolero would be collected in three days time. Nobody seemed to know what to do with him in the meantime. My other half suggested that he be put on a trailer in our barn (not actually a barn but the room next to our lounge), which, to my annoyance, is what happened.

After Bolero died the other animals sickened one by one and had to be returned to the breeder. Sadly, it spelled the end of the Association’s llama project and Jo resigned as President. In the meantime, we were very excited to take delivery of our two castrated llamas, Ulyss and Perou.

Our animals settled in and we began the long process of training them to allow us to catch them and take them for walks. We quickly learned that llamas have an invisible boundary around them which they do not like you to cross. A llama will walk away if a human walks towards it, and can run and jump with the best of them. So, catching one that has not been trained is a very fraught affair. After a lot of swearing and running around the field we eventually managed to catch Ulyss and Perou but the thought of having to do this every time was tiring to think about, let alone do!

Perou was a beautiful animal who plodded away patiently at my side as we walked along, but Ulyss had other ideas. He bucked and leapt whenever tasty green grass came into view, and was disposed to send a stream of spit in his human’s direction when displeased, which was often. We were feeling desperate and wondered if we would ever tame him. 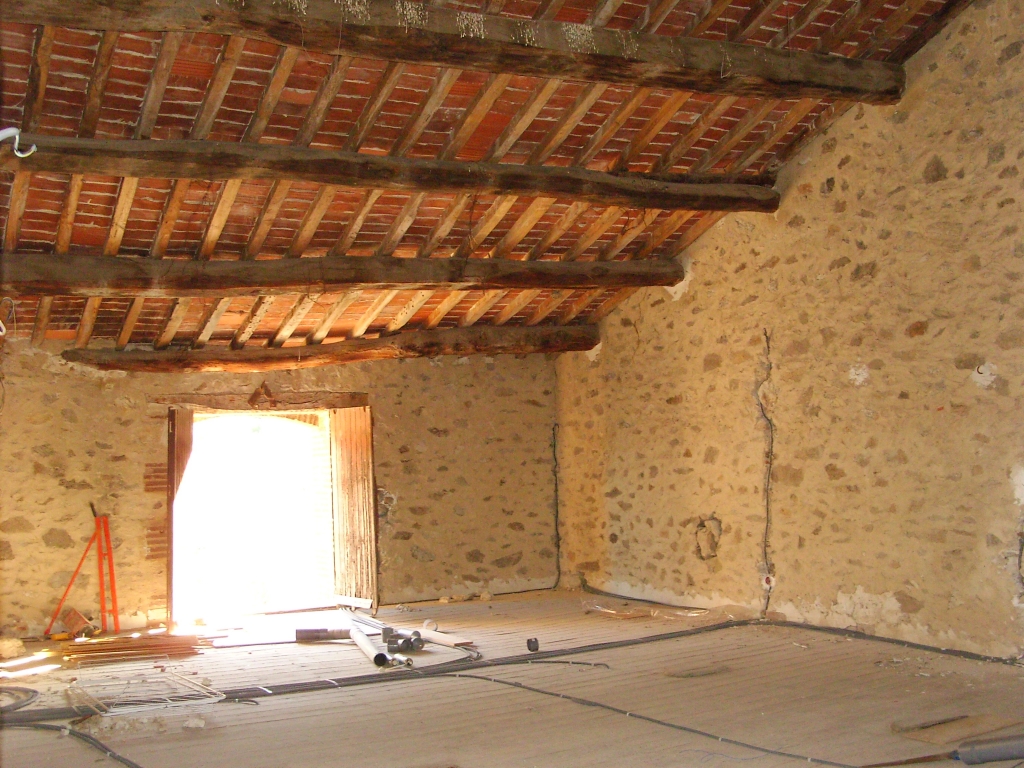 A fellow student on my teacher training yoga course told me how she had tamed her ponies, something about staring at them until they backed down. I rang hubby from London to pass on this important nugget of information. Hubby put a sprayer in his pocket while working in the field. He hid in a bush and jumped out on the unsuspecting Ulyss to spray him with a jet of water. I didn’t think this is what my friend had meant and it had no effect whatsoever. But, with time and patience, Ulyss became almost as docile as Perou, to the extent that we could put panniers on him, load him up with tools, and lead him up the mountainside. He became hubby’s favourite, but I loved the gentle, patient Perou.

The attic room in the old farmhouse was now completed with a new tiled floor, walls and window. A shower had been built and the plastering done. So apart from refurbishment of the old-fashioned, dark blue bathroom, this side of the building was complete. We had installed five solar panels in the field which connected to a large water tank in the barn. Now we just needed some means of heating the house.