Work proceeded on the house. The barn had its own natural beauty, with huge old beams and stone walls, which we wished to preserve. However, the walls had been filled in with a concrete render which had to be drilled out and replaced with lime, a more natural and traditional material. This time-consuming task was now finished and we had installed a staircase up to the yoga studio. The old, rotten floor had been replaced by French oak floorboards which I had waxed, and it was time to move my yoga classes up there. Everyone admired the beautiful new studio, the oak floor, stone walls and ancient wooden beams. At one end, patio doors looked over the gardens and by peering through a small window at the other end one could see the sparkling blue line of the sea.

I opened the doors to let the warm breeze in and the first yoga class in the new studio began. At the end of the session the students lay on mats and covered themselves with blankets for relaxation. At that moment a cacophony of  power drills, tile cutters and swearing started up as if orchestrated by an army of belligerent workers! My students, to their credit, didn’t move a muscle but for me it was a challenge to blot the sounds out while teaching!

In the studio there was just one item to finish. A small window is set in the wall between the yoga studio and the mezzanine floor in The Other End, and light filters through from a window in that room. In the evening as the sun sets, golden rays beam through and I thought it would be lovely to have a stained glass window there. We visited a glass studio in a nearby village which specialised in stained glass, and found an artisan who agreed to design and make it for us. 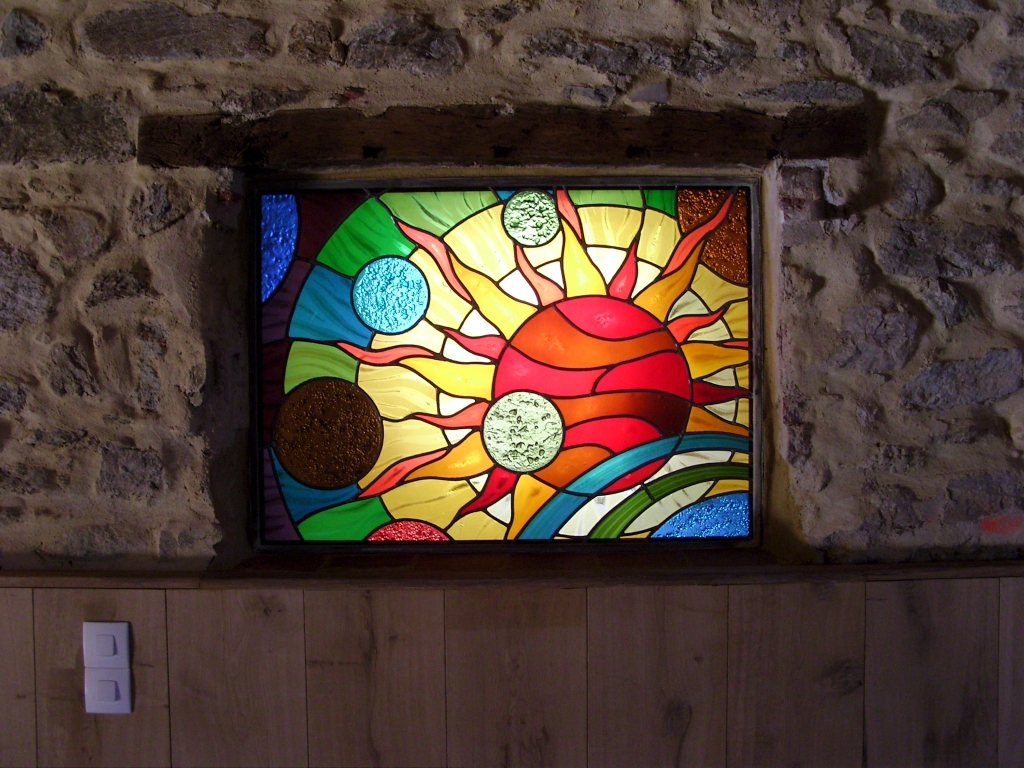 Llama training had been going well and we had been educating ourselves about llama husbandry. We had also discovered that llama poo was ideal for the garden, in America they call it black gold! Bill decided he would like to try to breed them but two castrated males were not going to be much help in that department. After a lot of searching on the internet we found a farm in the Dordogne which specialised in rare breeds and we made an appointment to visit.

The farm was run by an English family: mum, dad and two daughters in their early twenties. We were greeted by Rosemary, who explained that her parents were away and that she and her sister Ursula were running things. She showed us around as she fed her various animals and introduced us to horses, pigs, llamas, alpacas and various rare breeds of sheep and goats. I fell in love with the Angora goats at first sight and we negotiated the purchase of four females and a buck. It was plain that Rosemary loved her animals and we were pleased to see how well cared for they were. 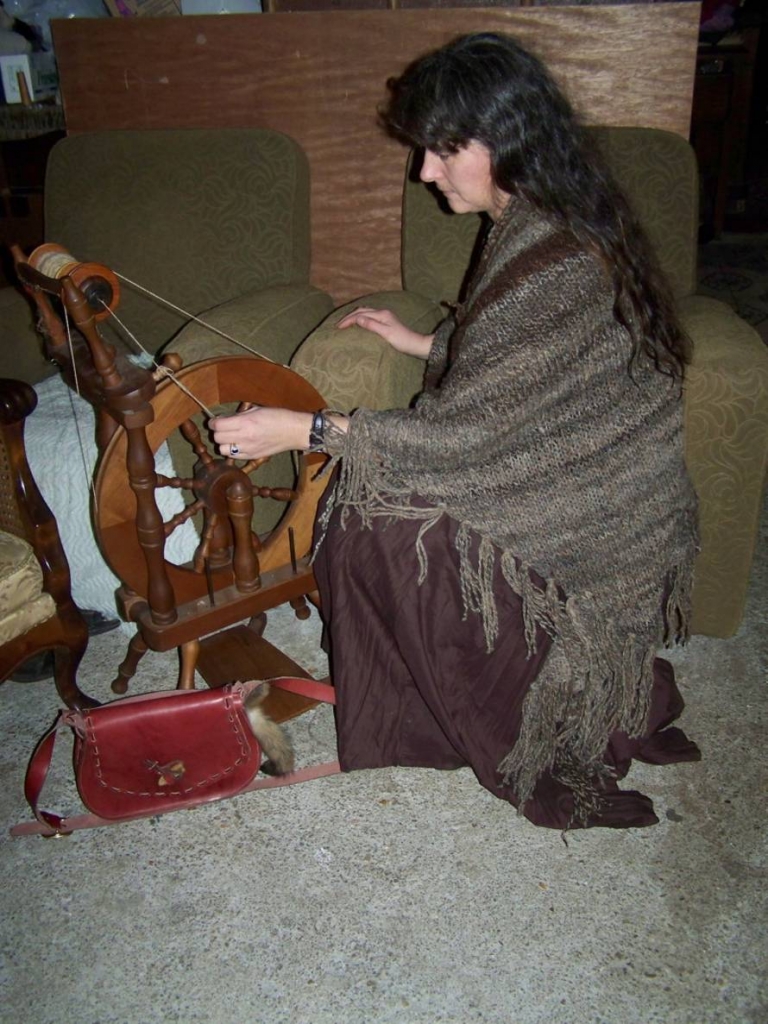 The two girls invited us to stay the night and we tucked into a meal of home-raised lamb, and home grown vegetables. Stoats, weasels, owls and foxes glared down from the kitchen shelves and made us feel rather uncomfortable as we ate our meal. “I taught myself taxidermy,” Rosemary explained as she poured us some home-brewed nettle beer. We looked longingly at the wine we had brought with us, standing on the dresser, but no, nettle beer it was. As we sat there that evening, the two girls gave us their story of how they’d arrived in France as 10 and 11-year-olds with their parents, their dreams of eco living and their interest in a medieval way of life.

After dinner Rosemary showed us around, including her collection of medieval clothes, all made in an authentic way, including shells for buttons. She had also taught herself to tan leather and had made bedspreads and clothes from the hides of some of her animals, and some beautiful shawls from llama wool. Her sister was the horse specialist who bred and trained Percherons. Their own gentle giant was used in place of a tractor to pull logs out of the woodland.

The next morning we agreed a price for Opal, a pregnant female, Lupin her daughter, and the crew of Angora goats. I added a spinning wheel to our purchases and felt very excited at the thought of getting back into this hobby, something I had not done for many years. Rosemary promised to deliver the animals in November, and we returned home very pleased and excited with our purchases.

It was time to tackle the job of hauling the wine vat out of the barn, where it had lived for probably a very long time. It was made of solid oak planking and was extremely heavy. If it had not been rotten it would have made a wonderful souvenir of the history of our mas, but unfortunately it had to go. It had been placed on bricks which raised it up a few inches from the concrete floor of the barn. Bill went to the hardware shop and purchased a chain that he could use to lift the thing up. This was certified capable of taking 3 tonnes. Bill put the chains and  shackles in place and used the tractor to hoist the barrel clear of its brick supports. He then had to slide underneath to remove the bricks and the wooden plank the barrel had been sitting on. Fortunately, after he did this he slid back out. Seconds later the chain gave way and the vat came crashing to the floor. Another life used up. 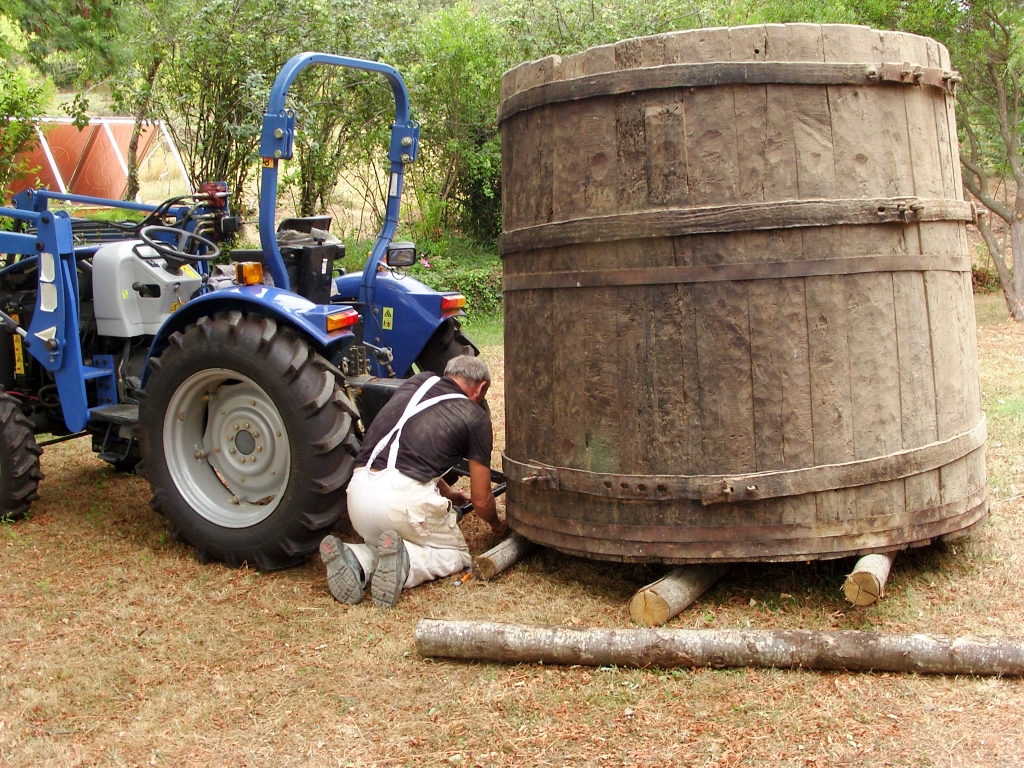 With the vat out of the way we could appreciate the sheer size of the barn. We decided to replace the rotten old door on the south side with a new set of patio doors and Madame Vidal was highly delighted to have the chance to make the large door and window frames with the necessary curved tops.

To my surprise, Screenwriter Man made an appearance at one of my yoga classes. As the male of the species is always thin on the ground in yoga classes, I was pleased to welcome him. After the second lesson he asked if he could stay behind for a cup of tea and of course I agreed. As we sipped our herbal tea in the garden, Screenwriter Man, or SM, as I now thought of him, laid out his plans to take Hollywood by storm. All very interesting but judging by the standard of the play we had all had to act out at a previous dinner party, he wasn’t going to be starring at Southend, let alone Hollywood. At the end of the speech he put down his cup and pulled a wad of paper from his bag. It transpired that this was a contract that he wished us to sign. I was a little confused and asked to read the whole document, which said that hubby and I would be lending SM £15,000 to help fund his blockbuster. It seemed that learning to be assertive was becoming an essential to life in the south of France.