Two days later a frantic phone call from Andrew informed us that the goats had disappeared. There was no choice but to jump into the car and drive straight up to Corsavy. Hubby and I, together with our friends and their children, searched the very large field. The goats were nowhere to be seen. The field was bordered on all sides by wilderness, forest that stretches for hundreds, if not thousands, of hectares. Undaunted we walked all day, calling and listening for the sound of bells, but it was as if the goats had been swallowed up by a black hole. 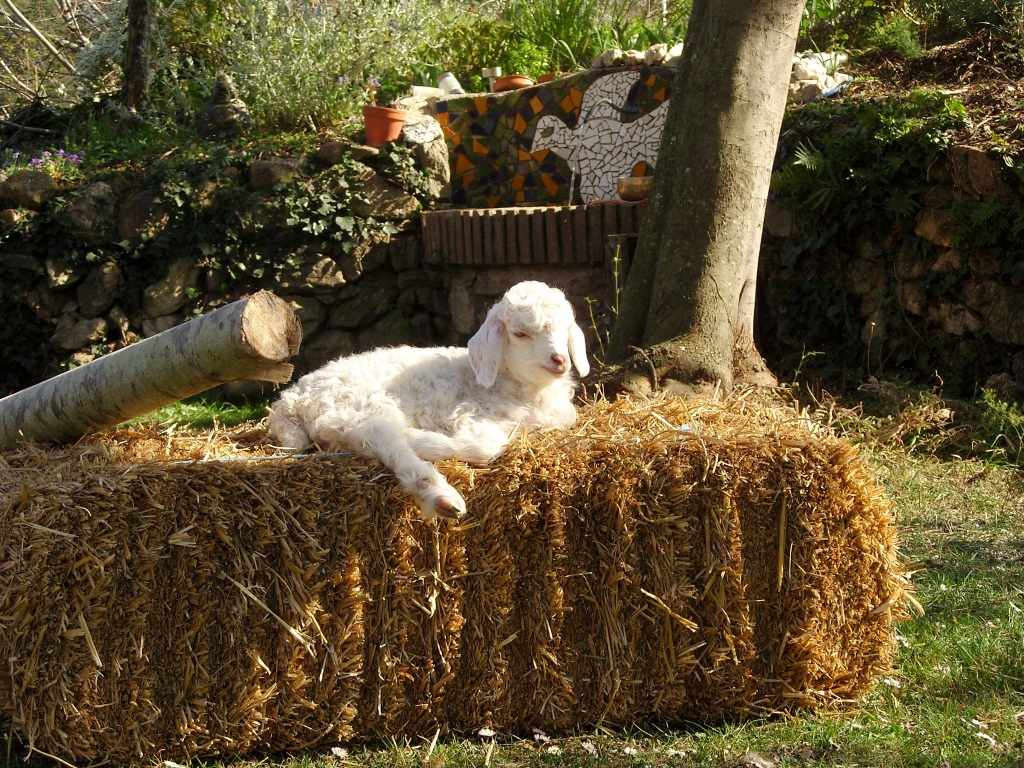 In the meantime, Eric the Robber was working away in slow motion on the front patio and we were starting to regret having hired him on a day rate. Howard remarked that it was being built so strongly we would be able to land f…… helicopters on it. We often spied Eric on his phone, or jumping into his car and disappearing for several hours on end. We kept our cool as the patio was looking good.

August passed into September, and eventually into autumn, and still there was no sign of our goats. We had alerted the forest authorities, the hunt and local people. Sometimes there were reports that the goats had been seen in various parts of the forest. When we heard any of these we always headed up to La Taillede, where we would walk, call out the names of our goats and listen for the sound of bells. Sometimes we would find wisps of wool caught on the branches of trees, but no other sign could be seen.

Opal had her baby, a beautiful female we decided to call Chakita. Following the instructions in our llama training manual, as soon as she was born we rubbed her with a towel and made sure we stroked her all over and moved all her limbs. Then she was up on her feet, wobbling and taking her first drink. The other llamas rushed across the field to inspect the new arrival, and it was very touching to see them all touch noses with little Chakita. Opal and her baby were then left to their own devices, we would not be interfering with them again until the baby reached six months of age. In the meantime, we purchased a male llama called Ch’umpi. He was a little shy and rather reluctant to meet our feisty girls, who spat at him and put him well in his place. We had to leave them together but had no way of knowing whether they mated or not, we hoped so. 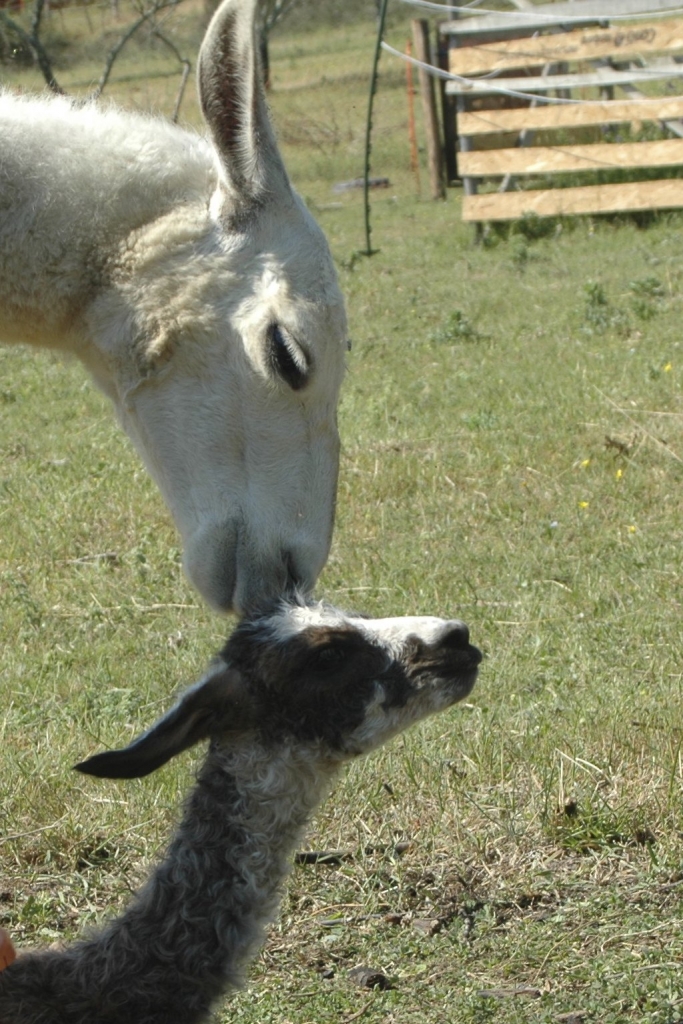 At long last, the Robber finished the patio. We could have built ourselves a small house for what he had charged us but nobody could deny it was a beautiful job, and as Howard often remarked, “you could land an effing plane on it!”

The next job was to tile the inside of what we called the barn. This was the middle section of the house which, in years gone by, had housed six huge wine barrels. It still had a concrete floor and now that the concrete had been knocked out of the stone walls and replaced with lime, it was time to find suitable flooring. To source some authentic tiles we visited the Briquetterie in St Jean Pla de Corts. This brick and tile factory operates and looks much like it did 300 years ago. Apart from the firing stack, it consists of a building built almost entirely of bricks and tiles. The whole thing leans at an alarming angle and by rights should have fallen down 200 years ago. Frank, the phlegmatic owner, was more than happy to advise us on which tiles to use and the pattern in which they should be laid. While negotiating with Frank, his father, ‘Joli Papa’, entertained us with stories of the past. He told us that when he was a boy, during the Second World War, he had witnessed a train being unloaded with Spanish bullion. “Why hadn’t you copped one?” Frank said with his usual hearty laugh. After various sketches in the sand he was satisfied we understood his instructions. He offered us a good price and we returned home happy.

The Robber, on the other hand, gave us another hefty price for the job of laying them and we felt less happy. There was no way we were going to fall into the trap of a daily rate again and negotiated a figure for the whole job. Robber brought a mate with him this time; they worked at top speed and a few days later the floor was laid. He knocked on the door to tell us it was finished. “What about the grouting?” asked hubby. “Oh, that’s not included,” came the reply. This time, the look on hubby’s face was enough to convey his annoyance. The grouting got done and we parted company with the Robber and his mate. 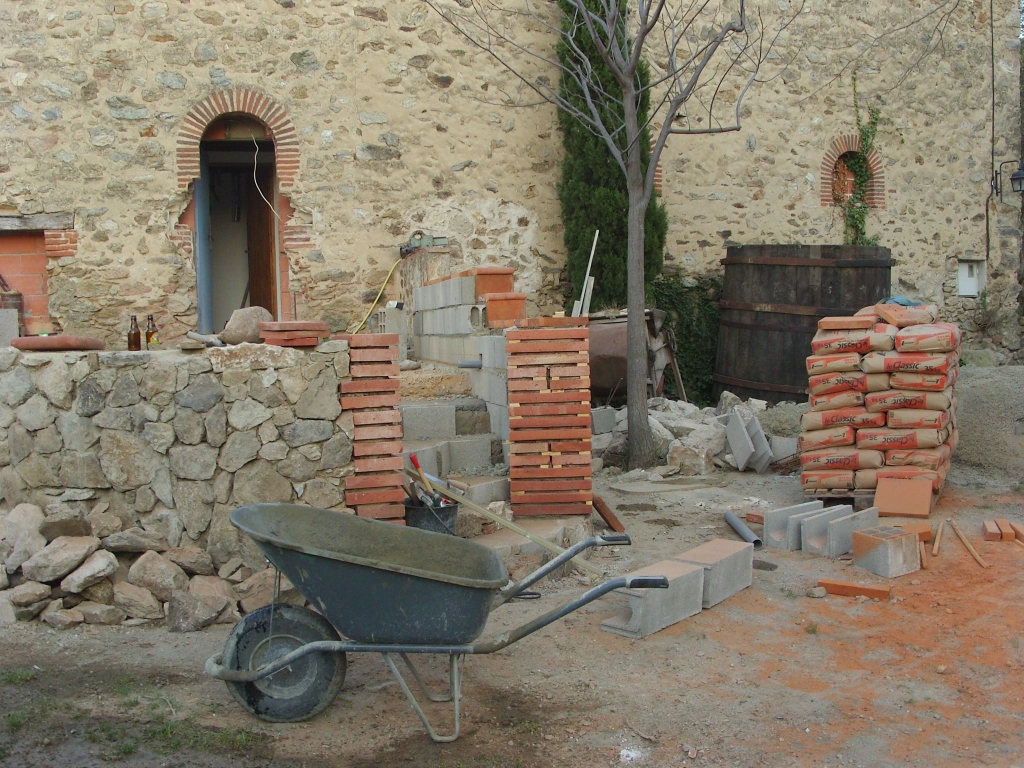 We had been walking all the llamas regularly along the road, much to the interest and amusement of the locals, who often stopped their cars to speak to us. We couldn’t understand a word, so just smiled and waved and hoped for the best. But word was filtering through, via our friends in Corsavy, that our goats were causing havoc in the forest, and the forest ranger was none too pleased that all his saplings were being eaten. Something would have to be done, we just didn’t know what.