Once back from the UK it was quickly back into the swing of yoga classes.

I was teaching a meditation class in the yoga studio when there was a loud kerfuffle at the door to the ‘barn’ below.   I could hear Arthur shouting out “Marian! Marian!” This was accompanied by the loud clatter of Jo being manoeuvred through the door in her wheelchair. My meditation students were half way through a pranayama (breathing) practice and I indicated they should ignore the commotion below.

We started to do a simple chant — so ham so ham. Things went quiet then all of a sudden there was a very loud SO HAM from down below. I looked at the class, they hadn’t flickered an eyelid. It went quiet again, with just the occasional OM! floating up every now and then. I had to pinch myself to stop myself bursting out laughing. Then from below came Jo’s voice MARIAN!

At this point I gave up, left the meditators to it while I padded down the stairs to ask Jo to be quiet for a few more minutes.

Jo told me she would like to come for the following week’s class, and I heard from the old lady’s son that she wished to come again, too.

I organised the class to take place in the lounge for easy access and spent some time designing a class that would be suitable for someone in a wheelchair as well as a frail 86-year-old. That week, most of the class members failed to appear, notably the old lady and my wheelchair-bound friend. In their place was a six-year-old boy, the son of another class member.

He was well behaved and no trouble at all, but we had to adapt the postures somewhat, so we did lion, tiger, a tree blowing in the wind and a tree breaking in half, all accompanied by suitable noises. Thankfully, the surviving class members joined in, making the noises of a tree breaking in half with tolerance, even some gusto.

That spring I spent a lot of time away on various yoga courses and concluded them with a workshop led by myself in Bethnal Green. To keep costs down I stayed in a very down-at-heel so-called ‘hotel’ directly outside Bethnal Green tube station. Needless to say, I was kept awake all night by loud rap music. I don’t know what got into me, but by 1 a.m. j’en ai marre, as they say back home. I marched down the corridor and stopped outside the door where the offensive music was coming from and knocked.

What you want? came a deep, annoyed voice.

Keep the music down, I said bravely/foolishly.

If you don’t f… off I’ll come out there and give you one, came the reply. I scurried back to my bedroom and barricaded the door. 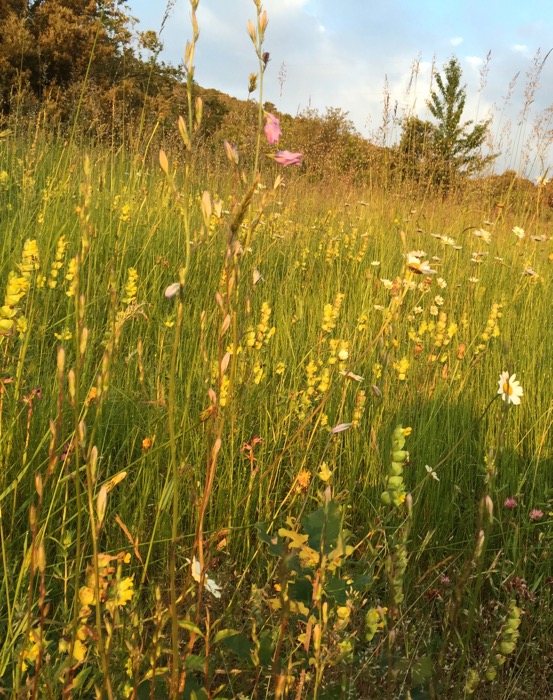 I returned to Mas Pallagourdi to find that the weather had been rainy and the garden was knee-high in weeds. We had to start getting the place ready for a group of ladies from Winchester who had booked the whole house for a week plus a daily yoga lesson. A year or so earlier I’d met Rosy while walking the South Downs Way. I had stayed the night at her B&B in Winchester and while chatting, Rosy said she would like to come with a group of friends for a yoga holiday at our place. So now hubby and I had ahead of us two weeks of hard work, cleaning the house, removing our own possessions, making beds up, and getting pool and garden into a fit state for visitors.

The day arrived and a group of well-coiffured ladies in their sixties and seventies climbed out of their hire cars. Each had a suitcase large and heavy enough to contain a dead body. After hubby and I had lugged these monstrosities upstairs we welcomed their owners with nibbles and wine and I thought I would take the opportunity to explain a little about Mas Pallagourdi and the area. 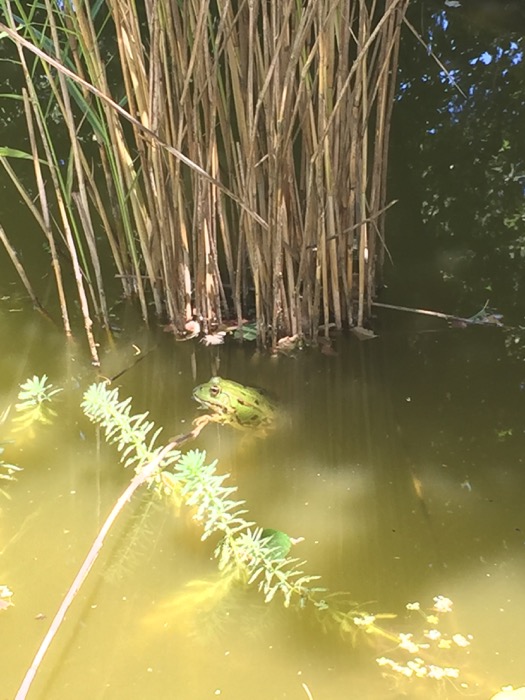 Hubby and I are very proud of the ecological way the house runs, using solar panels and so forth and I thought I would tell them about the local wildlife that we promote. Bats live behind the shutters. You might see droppings on the window sills, it’s not rats but bats, I said. The ladies screamed, some putting their hands on their heads as if to preserve their hairdos. Hubby looked at me in a warning kind of way but, never being much good as body language, I ploughed on regardless.

We keep chickens and you can collect the eggs, if you like, from the hen house, I said.

I’m a city girl, I don’t do chicken sheds, one piped up.

At that point I decided not to mention the wild boar rampaging around the wood, the beautiful lime-green lizard who lives in the woodpile nor the toads we had carefully put into the pond, the snakes that preyed on them, and the snake-eating eagle that often roosted at the top of our fir trees. No, best not to mention any of that. 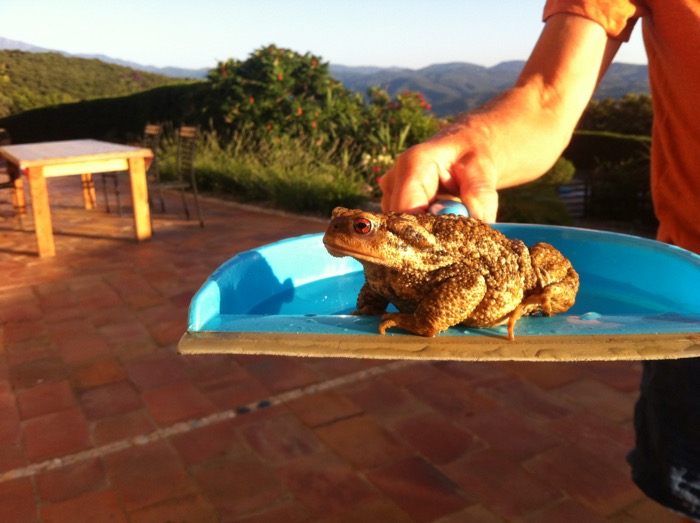 The next morning I walked through our woodland, from the yurt to the house to begin the first yoga lesson. I could not understand why the house seemed to be vibrating, perhaps we were experiencing an earthquake. I walked warily into the dining hall, then realised that a dozen hairdryers were whirring away in various parts of the house.  I sat down in the yoga studio to wait. One by one the ladies appeared and stood in a queue to tell me their various ailments, which was all to the good, better that I knew what I would be dealing with.

One told me that she already knew all there was to know about breathing and another said she was unable to do forward bends and spent some time explaining to me what forward bends were, just to make sure I knew. When the class was ready to begin one piped up, You do know, don’t you, that the taps in the kitchen don’t work?

I was sufficiently rattled to run downstairs and test the taps, which were in perfect working order. After that, the days passed fairly uneventfully, apart from the oldest member of the party, a game 73-year-old called Delphine, getting locked in the toilets. A certain nursery rhyme came to mind but I kept quiet.