Keeping the boar at bay

One day hubby came running into the kitchen. What on earth is it? I asked. Just come and have a look at the field, he replied.

Our field, which hubby had been carefully tending and which had started to resemble a crown bowling green looked as if a drunk ploughboy on steroids had been let loose on it all night.

As well as brown ridges all across the field, the drystone walls which bordered the garden had been knocked down. They couldn’t have been flatter if a giant earth-moving machine had run over them. Hubby was wringing his hands in despair. Remember he hadn’t believed me when I told him that wild boar had been camping in our field? Well, he was wrong (again)! 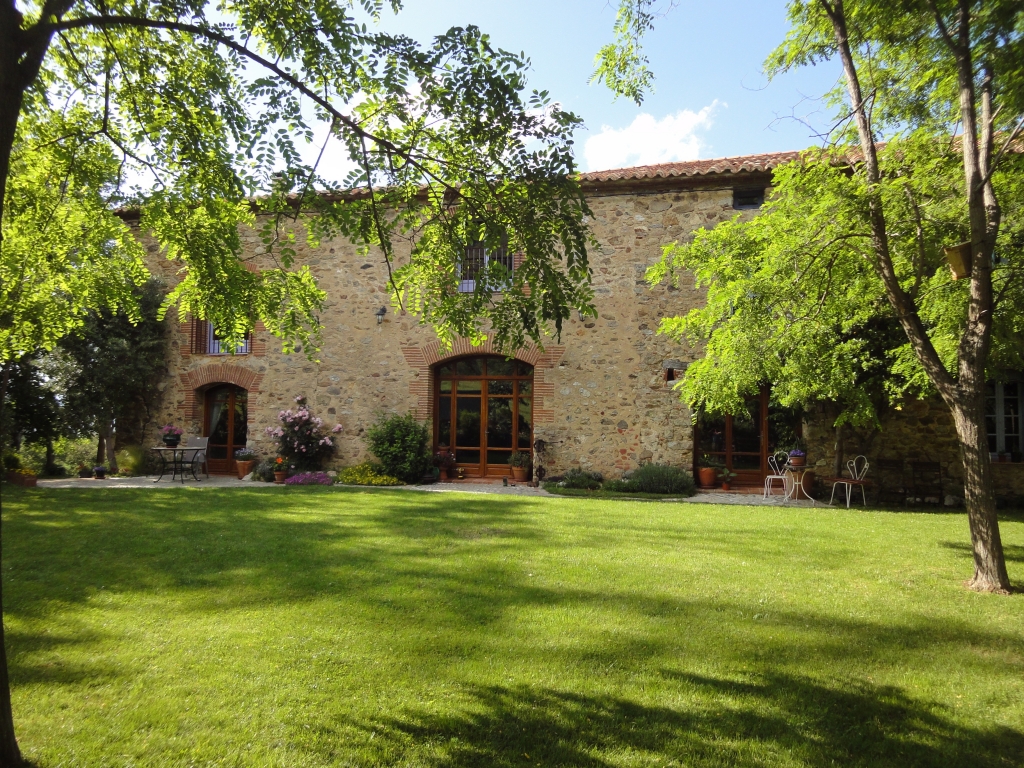 When we first arrived at Mas Pallagourdi we had read an article in the Permaculture magazine on the benefits of human wee. Among the rather dubious claims of curing spots etc, it can also be used as an insecticide and an accelerator for the compost heap. Most interesting though was the claim that the smell puts off unwanted visitors — animals as well as humans.

Hubby and I duly set to work weeing into a bucket (but only when the builders weren’t around) and then tipping this onto little piles of branches that had been chipped up in our new chipping machine (also fantastic for growing stuff, apparently). We had been doing this for quite a while but the strategy was obviously not putting off the wild boar. One day, hubby was sitting quietly in the wood sharpening his chain saw when 29 wild boar walked past in a long line. 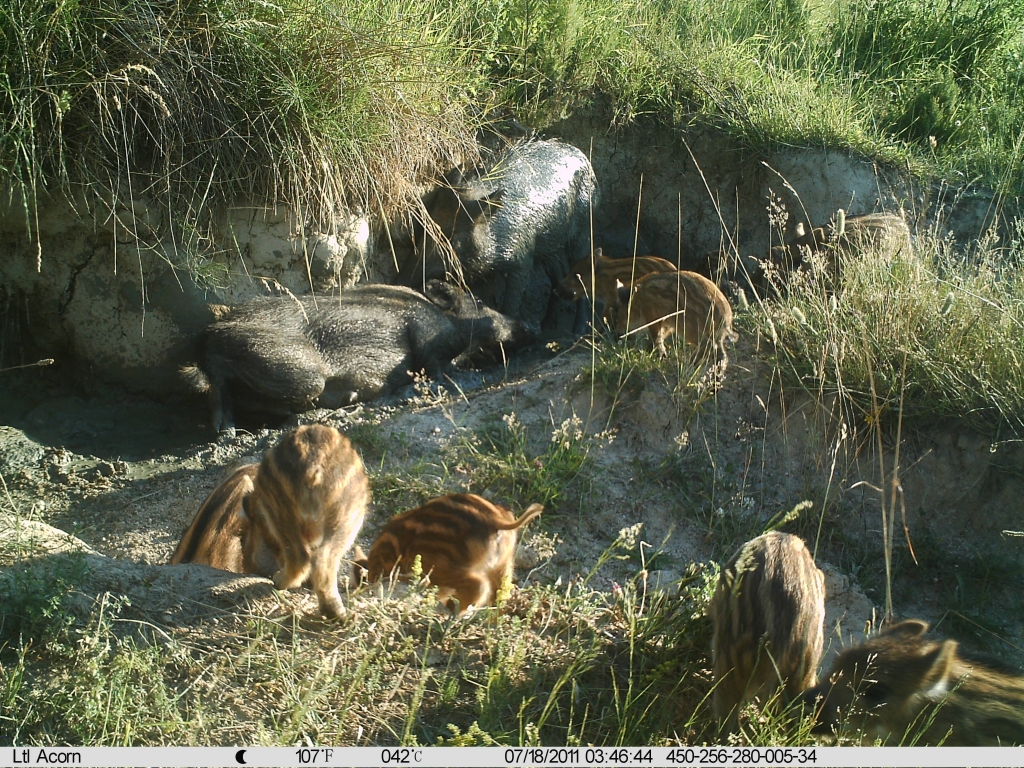 Clearly, something had to done. Hubby spent the next few days on the internet researching the purchase of a gun or a cross bow, much to my consternation (mental image: wife shot accidentally by cross bow says husband). Then a friend suggested that he could bring his French, non-English-speaking neighbour to assess the problem. “We can tell him where they’ve been,” hubby suggested helpfully.

Henri could speak no English and as hubby and friend could speak no French, I was dragged along as an unwilling interpreter. We walked around the field showing Henri our boundaries, and hubby asked me to explain that he had seen 29 boar walk through the wood. This information made Henri visibly excited.

As it was still the hunting season it was, apparently, quite legal to shoot them, or so he told us. I then had to translate the details of his boar-killing system, which seemed to involve cutting up a tuile – I didn’t know what that was – inserting food underneath, installing a ‘spot’ (whatever that was) – you hear the ‘clack clack’ of the boar as they come to feed, you raise the gun – all this with much body language – and bam – dead!

We showed Henri the yurt and there followed some horrible chauvinist jokes which I did my best to ignore. Then we showed Henri the outdoors shower. “Bon pour apres l’amour,” he said, grinning and showing his many blackened teeth. I was not sure whether to snort or laugh.

We had some friends who owned 50 hectares of woodland further up the valley, and we often visited them to help out in the forest. One local, Paul told us, had gone out to cut some wood and only been found several days later, having been squashed by a tree and eaten by boar. After speculating on which horrible end had come first, we thought it was just as well that Henri had been recruited. 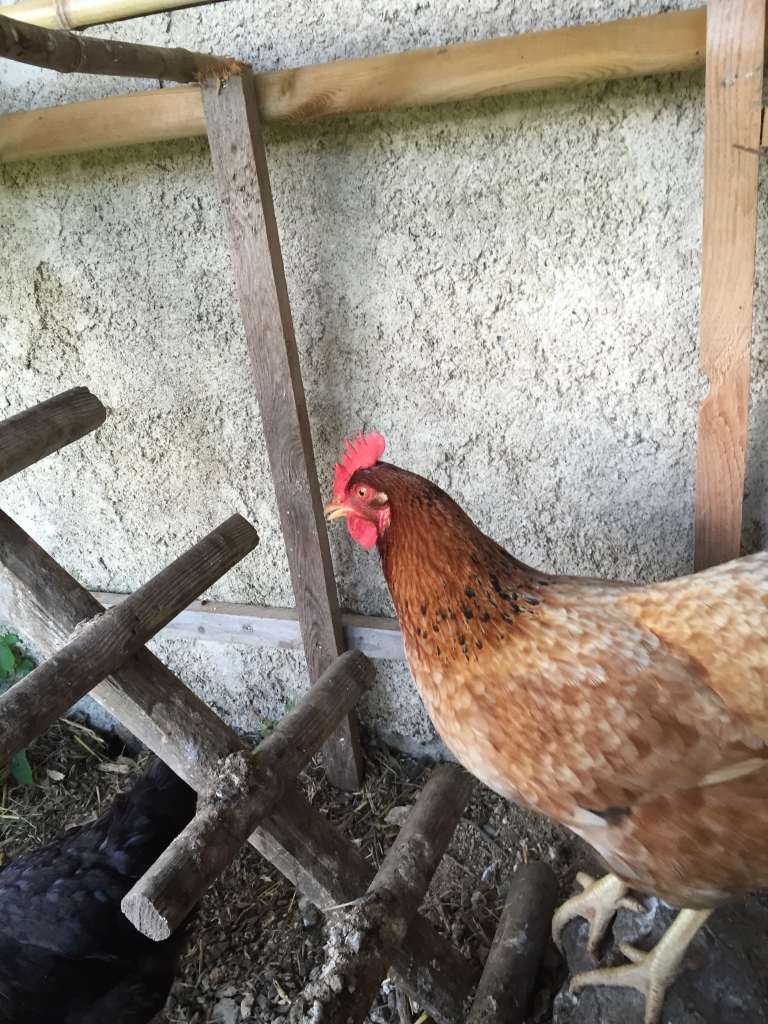 In the meantime, we had been adding to our collection of beautiful chickens. These had been roaming free in the field but were shut up at night. Someone kindly donated a very large, white cockerel called Winston. We had set up an alarm that went off every night to remind us to lock the chicken shed but only a couple of days after taking in Winston, we went out for a drink.

Fatal. Need I say more? The chicken shed did not get locked that night and the next morning all 24 chickens plus Winston had disappeared. It was possible to see the flattened grass where they had been dragged across the field; there was a small hole under the fence, and that was that. It was hard to believe that some animal had removed all those chickens, especially Winston, who was the size of our border collie. Some neighbours said it must have been a human thief but it seemed unlikely that a human would have crawled through a small hole in the fence, and others tapped their noses and said maybe it had been a genet or civet.

Once we had got over the shock we decided to try hatching out our own chickens. We sent off for a special breed of chicken eggs and hubby purchased a very complicated incubator. To cut a long story short, only one egg out of a dozen managed to hatch and that was deformed. Hubby had to put it out of its misery. Since that time, various chickens have fallen prey to the fox, of which there are many, and one was mauled and killed by a bird of prey. The two remaining chickens walk around together as if they are physically joined at the hip.

Our friend came back with Henri to lay the trap for the wild boar, bringing the ‘tuile’— a roof tile cut in half and held together with wire. Attached to the whole contraption was an empty beer bottle – to produce the clack-clack, apparently. This was placed over some maize sprinkled next to the yurt while Henri acted out the whole thing in case we had not understood. First, he hid in the yurt,  poked his head out and (with a big grin).… Bang! The only flaw in this plan was that, to this day, the boar give Mas Pallagourdi a very wide berth indeed. They’d obviously been eavesdropping!