Imagine a land of steaming swamps, belching bogs and forests full of

With that cheesy alliteration read in a gravely Hollywood baritone it could easily be the trailer for some last-ditch effort in a sagging movie franchise ‘Jurassic Park v. The Lost World – this time it’s personal.’ It’s also a pretty accurate description of how our little corner of the world was (and much of the rest of the planet, come to that) about 100 million years ago. 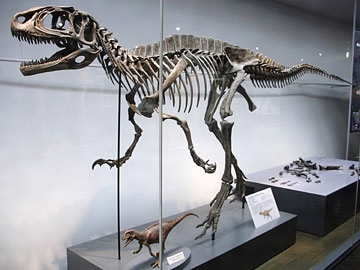 So what exactly were those ferocious ‘fings the forests were full of? Why Fukuiraptors of course, a dinosaur of the Middle Cretaceous period – an era set so far in the mists of antiquity it actually pre-dates Betamax. And what an utterly brilliant name. For no-one messes with a Fukuiraptor. Let’s face it, if you’re going to be a species to reckon with, then you have to sport a moniker that properly cuts the mustard. I’m sorry, but the wifully-annoying “Irritator” dinosaur was always destined to have its ear flicked with a rubber-band on cold mornings in the playground. But a Fukuiraptor just sounds so darned dangerous. And at nearly 6 metres long (including a metre of jaws) and weighing around a ton, it’s the kind of mean hombre night-club bouncers think twice about before turning away. “Oi you, Shrek-breath, read the sign, no trainers ……oh, sorry pal, ha, no, ‘course, in you go.”

And I used the present tense there advisedly for believe it or not, far from being lost to pre-history, there are thousands of species of dinosaur still around today. They’re known as birds. For although the word dinosaur (coined in Victorian times) stems from the Greek deinos saura literally meaning ‘wondrous lizard’, it’s a misnomer. Contrary to the Victorians’ understanding, it’s birds rather than reptiles that are the direct descendants of the fearsome creatures that roamed Earth millions of years ago. Top dogs they were too, since they had no predators in the food chain (as long as we ignore the inconvenient truth that some of the bigger dinosaurs snacked on smaller ones.) Typical, there you are, you think you’ve got first dibs down at the water-hole and then before you can say Triceratops, it’s wham, wallop and Sayonara Bangkok.

As for local interest, well dinosaurs were found right here on our doorstep in Catalonia, with the mightily impressive-sounding Parahabdodon Isonesis (cries of that’s easy for you to say) being just one of them. Remains of this duck-billed giant that existed one hundred and fifty million years ago were first discovered here as recently as 1995. The eight-meter long herbivore displays a clear ornithological outline, giving plenty of weight (2 tons in his Speedos) to the bird-ancestry theory.

Now whenever dinosaurs rear their heads, there are a couple of hoary chestnuts that crawl out of the woodwork. Firstly, did they and humankind ever co-exist? Dr Angel Galobart at Barcelona’s Institute of Catalan Palaeontology says, “Carbon-dating tells us that dinosaurs died out  65 million years ago, whereas primitive man showed up all of 64 million later. Co-existence just doesn’t add up, whatever the Book of Job and the Creationists say.” So there you have it, from a man who knows.

As for “why did the dinosaurs die out?” Well, here the answer is less clear cut. Wacky conspiracy theories abound, with alien abduction (that must have been one mother of a flying saucer) a clear front runner, followed by being wiped out by dinosaur-Aids (no, not out-of-control mobility scooters) all the way through to divine retribution (they must have got right up His nose.) Experts however say that it was most probably a huge meteorite impact, followed by flooding and the resultant loss of their food supply. Personally I think they died of boredom. Think about it, they only had BBC and that was in black and white……….

Searching through the dinosaurs’ A-Z for an alliterating “F” variant, I just couldn’t resist that wonderful Fukuiraptor. Close second though was the splendidly-handled Fabrosaurus but it just  wasn’t ferocious-sounding enough, in fact just the opposite – cue images of Kenneth Williams as a paleontologist in Carry on Roaming, “Oooo matron, Fabrosaurus!”

And for a Yabadabadoo day out, take the kids along to the dinosaur museum (France’s largest apparently) at Espéraza, just over an hour’s drive north-west of Perpignan.