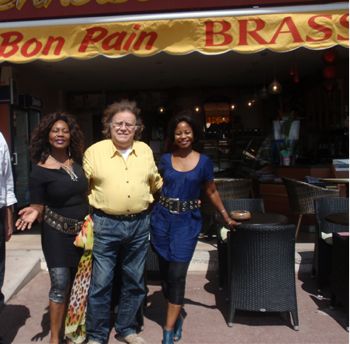 I have just had my first full bodied, face down, massage.

It may be no big deal to some of you reading this, but at 58 years old and from a man who always thought that this form of therapy was for the rich, the famous, Hollywood gangsters and mostly women, this was a major event for me.

It came about because I received a gift of a 30 min massage at Calicéo, a local health Spa just outside Perpignan.

I was totally lost on how to react to this gift. My first, immediate subconscious thought was that of course I would accept the gift with thanks…. but would probably never use it.

That night, silly as it sounds,  I turned it over and over in my mind as I lay in bed, so much so that I could not sleep, stupid really. Such a silly thing to get anxious about.

That next morning I decided to bite the bullet and face up to this anxiety by making an appointment for the massage.  I also added it to my ‘new things to do before I die’ list, although it will be the first I have scored off the list once I have done it. Para gliding I can do when I am in my coffin.

Now I had my appointment so I had a few days to prepare for this new experience.

My immediate thoughts were what do I wear, and what if I embarrass myself with the young lady I assume will be doing the massage?

I could feel my face flush just thinking about this. I wondered if I could buy Bromine in France without prescription? It was reportedly given to soldiers during the First and Second World wars in their tea and also given to prisoners in many state jails.

All this was done without the soldiers or the prisoners knowing about it. Mais attend, what if it’s a man doing the massaging? On and on and round and round went the thoughts. In the end, I decided to wear reasonably tight underwear and discipline myself…dib dib!

The day arrived and I parked the car in a very busy car park, I was 30mins early.

From the outside the building and surroundings looked modern, new and very clean. Across the road from the Spa was a café for those people who liked to cheat after  their health and fitness visit.

A bus full of students, mostly ladies, pulled in just before me, so I pulled in my stomach, and straightened my back to show that I was fit and active.

Unfortunately, having no hair and my fair share of wrinkles, one of the young ladies  picked up on the fact that I was neither, and showed me that special respect reserved for the elderly, by opening to door for me and asking me to go first. ‘Après vous monsieur’…sigh!

I entered the small reception area to the noise of excited girls all queueing up to buy their tickets for the swimming pool, or Saunas, or the Hammams (Turkish Baths), maybe the Gym, who knows as there are a lot of activities on at this centre.

The girls were like a swarm of bees around a honey pot. One minute you would be at the front of the desk and next you would be rotated out by a bigger bee who was more in a hurry.

My massage room was easy to find, 4 or 5 paces inside the reception area and tournez à droite. I presented myself to the receptionist as the 15:00 appointment and at the same time apologised for my poor French, which, along with her complete lack of English, encouraged her to use hand signals.

She was very nice though and pointed at a chair and placed both of her hands in the palm down direction which told me I had to sit…woof, pas de probleme Madame.

After a few minutes my masseur arrived and offered me a choice between 2 or 3 bottles of different massage oil to rub on my body…  Phew! Was it getting warmer in here? She unscrewed the tops of the bottles for me to smell, I picked one – no idea what type it was but it smelt good.

I was then escorted into the treatment room by my personnel Masseur. It was a small room with deep wine coloured walls. It had a shower and a locker.

There was some gentle piano music in the background adding to the relaxing ambiance of the room. I thought I would be given a shower then a white towelling robe like they get in the movies but no, she told me to undress but keep my underwear on. Zut,it WAS a respectable place.

Before I started undressing she told me that once I was undressed, I must lie face down on the table with my nose and mouth resting over the purpose made hole in the table and wait for her return.
So there I was lying down on the table, my tight underwear working so far. The door opened. There was no introductory conversation, she just started putting oil on my legs first, this lasted a few minutes then she rested a cotton towel over the treated legs and also over my compacted bottom, good idea.

She then concentrated on massaging everything above the waist all the way up to my neck. There was lots of oil used and loads of rubbing and sliding, but no kneading or pummelling.

I like the rubbing and sliding. After approximately 15 mins of this, she covered my back with another warm towel then started working on each leg and the feet.

This was the last part of the treatment. 10  mins of leg work followed by a final slow feet to neck push with the hands, by-passing the bottom, and it was over, my 30 mins was up.

I lay there for a few minutes, then she asked me if I would like tea or coffee, I went for the green tea because now I was a healthy man. She asked me to get dressed and come to the reception area for the tea.

I was sorry that it had finished, it was really enjoyable. There is a small bowl in the room for leaving a tip, this is a must as this type of job is poorly paid….. and look at some of the people you have to massage.
I enjoyed my tea and said ‘à bientot’ – and I meant it.