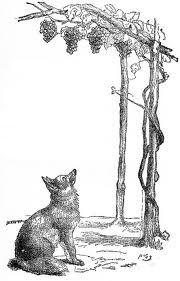 When we were young we generally read some of Aesop’s Fables:  The Fox and the Grapes and The Hare and the Tortoise are familiar to most of us. However, the versions we have are merely retellings of the original Greek stories, given to children to read because of the lessons given in them – patience reaches goals, or slowly wins the race.

The French were much luckier.  One of their great writers, Jean de La Fontaine, produced French versions of fables, in verse and with illustrations.  There are twelve volumes, with stories such as The Ant and the Grasshopper, told with elegance, wit and verve, in simple French which is usually easy to understand today.  Each teaches a lesson about our relationships with society.

In Le Laboureur et ses Enfants the obvious lesson is there, but there are many more inferences to draw from the poem.

Unusually, this poem puts the moral first, whereas the conclusion usually finishes the poem off in a neat couplet, as another comment does here.  The poem can be taken on a literal level, or one can interpret it as a call to family cooperation and teamwork, to continuity or to the value of cultivating one’s skills and abilities, to the development of culture, or even, as one commentator does, as a recommendation to garden organically.  La Fontaine seems simple  but is profound.

(Le Laboureur is not a farm labourer in English terms, but is better compared to a yeoman farmer, owning his land and well to do, but neither gentry nor rich)

“Work, take pains,
It is the capital least likely to default.

A rich farmer, feeling his death approach,
Called his children to him, and spoke without witnesses:
Beware, he said, of selling the heritage
Which our parents left to us.
A treasure is hidden there,
I am not sure in which place, but a little courage
Will help you find it, you will get to it at last.
Turn over your field when the August harvest is over,.
Clear out, rake over, and dig, leave no spot
Where hands have not passed and repassed.
When the father died, the sons went back to the field,
Hither and thither, everywhere, so well that at the end of the year
They had earned more money,
But found none hidden.  But the father was wise
To show them, before his death,
That work itself is a treasure. 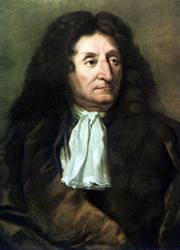 Jean de la Fontaine (1621-1695) is described as ‘ the purest French “classical “poet, apart from Racine ‘. In his day he was not considered a children’s writer. Nowadays he is remembered mainly for the 12 volumes of the Fables, but he wrote over a wide range, from humour to the Dies Irae and his Epitaph for Molière, which links him to the great Latin authors, Terence and Plautus.  He had an interesting and varied life, moving in the main literary circles of the Paris of his day.

Click here to find out more about la Fontaine.