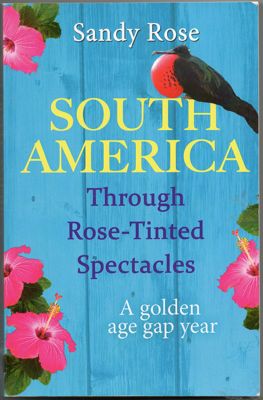 In 2011 Sandy Rose and her husband Nigel, decided that they needed a break from their retired lifestyle in a quaint French village in the beautiful Pyrenees Orientales and a dose of adventure was in order.  They were soon proud owners of backpacks and, thanks to the internet, a rough itinerary that would take them around South America for ten weeks.

But what could prepare two young-at-heart travellers for the sensory onslaught of South America, or indeed communal hostel life?

They embraced every moment, and were so energised by their foray into the unknown that they returned the following year to continue the adventure.

This is an inspirational and witty account of their travels as they visit some of nature’s most  majestic sights, unwittingly get caught up in a carnival and develop a taste for local cocktails.

Nigel and Sandy through the eyes of others. 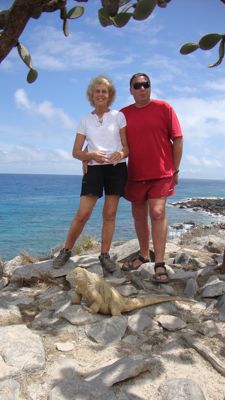 It is difficult, if not impossible, to perceive ourselves as others see us. To that end I enlisted the help of friends and family to provide a snapshot in words that might give some insight to any potential readers.  I have extracted a few quotes from the myriad of perspicacious responses which have amused and baffled me  “Who is this refined lady?” and hope that the ensueing collage will portray the ‘Rambling Roses’ with a few of their many idiosyncrasies.

‘Sandy, the more restless of the two and Nigel liberated by a move to France, fostered an urge to spread her wings once more and began to plot a back packing tour of South America. Nigel, less motivated in this respect, found himself being gently, but robustly coerced into this project ultimately joining in wholeheartedly’.              A.S

‘Arhhhh, the quintessentially English Roses, this is what the label reads. “Exquisite flowers of medium size that are pleasing to the eye. They are healthy, hardy, reliable, strong, vigorous and almost thornless’.             K.B

‘Nigel and Sandy are friends of mine who have succeeded, without difficulty, in persuading me, via their blogs never to undertake a backpacking holiday in South America!                         P.J

‘One can imagine that people of the mature years of Nigel and Sandy, would be spending their holidays indulging in wrinkly special offers at Paradors. Well it beats going senile but, having recalled some of their adventures, I think that we will be sticking to the upper deck of a cruise ship’.              R.C

‘Nigel and Sandy are a delightful couple. They are so different in temperament, Nigel “All in good time” and Sandy “All in one day, preferably yesterday”.           V.J

‘For Sandy, life always has to be lived in the fast lane. Hyper active, even on a bad day, she remains forceful, adventurous and independent. The next project is always on her mind, generally more demanding and reckless than the last’.             P.D

‘How well do you know your friends?  Pretty well most of us would say.  A bit like us in a way, taking retirement in the Midi at an easy pace, not much risk associated with aperitifs by the pool or the occasional game of something not too challenging.  It comes as a surprise then, when you discover some amongst us have a hidden side to their character, an adventurous streak.  Take Sandy for instance, a caring English lady, gentile and refined leading a quietish life indulging her many interests in the South of France and her husband Nigel. A pragmatic and well grounded retired solicitor, whose idea of adventure, one always assumed, was an outside bet in the 3.00 at Sandown.  Well read on……we are not talking Ranulph Fiennes and this is not about an Antarctic trek, but relatively speaking it ranks well with famous Ice Man’s escapades.

‘We would have, no doubt, consulted tour guides and examined the vast amount of information available to the uninitiated traveller. Then from the comfort of our home booked tours, hotels and hire cars in pursuit of ease and comfort. We would have deprived ourselves of encounters with eccentric pony trekkers,  back street muggers and a multitude of sights, sounds and smells not to mention the odd dicky tummy. You know, all the things that backpackers revel in.

This is an inkling of the delights that Sandy and Nigel experienced on their travels in South America that Sandy describes so delightfully in her book.              J.A

When the idea of a back packing holiday in far off lands was mentioned. A trip along the obligatory Pennine way sprang to mind. Sandy, who, by her own admission, has never walked to the bottom of her garden,  decided that S.America was a much more worthwhile venture. It was a done deal when Nigel, being a gourmet of some repute, found the thought of Machu Picchu utterly delightful and vowed to taste it forthwith.   J.C