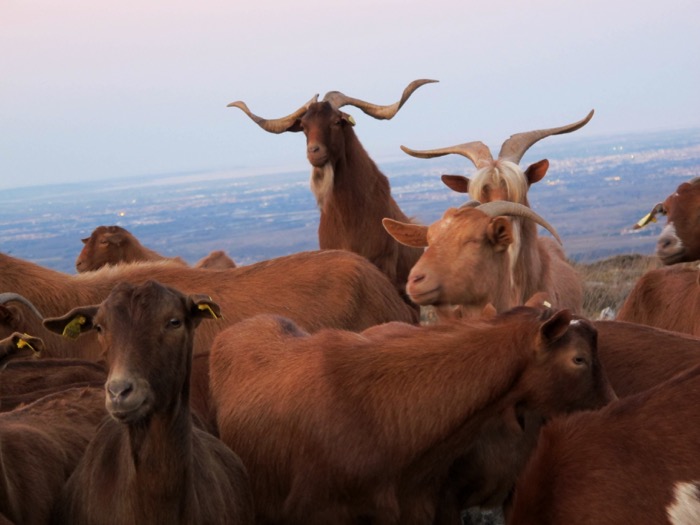 Goats were first introduced into France by the Arabs during the Saracen invasion.

Goat breeding was developed particularly in the Poitiers region, where, in 732, the famous Battle of Poitiers took place between the Saracen troops and the French, led by Charles Martel.

The Saracens were defeated but some of the Moors remained in the area and became goatherds and breeders.

Goats can be bred on quite barren land and thrive around vinyards and dry vegetation. The goat can actually provide double the amount of milk provided by a cow, taking size and weight into consideration of course.

The milking season of a goat lasts only 240 days, between March and October, although the goat ‘industry’ has managed to extend this season through artificial insemination, so fresh goat’s cheese is now available all year round.

The best goat’s cheese is cheese that has been produced in between March and November.

The size, shape, texture and taste of goat’s cheese vary from region to region and from breeder to breeder.

The look and taste depends on the length of time the cheese has been matured. After 8 days, the cheese is still very white and the freshness and taste of the milk are beginning to give way to a more suptle flavour.

After 15 days, a fine white, yellow, or beige croute ( rind or skin) begins to form on the surface of semi sec cheese.

After 3 – 4 weeks, the cheese should now be firm and compact and very slightly crumbly with a more mature taste.

Goat’s cheese should be kept in the vegetable container of the fridge, but should be taken out at least an hour before eating.

Here are some of the most well known, although they are not specifically from the Pyrénées-Orientales.

Chavignol is a small village near Sancerre in the Cher region of France, renowned for its goat’s cheese.

Goat breeding has been a tradition in this area since the 16th century.

The ‘crottin’ takes its name from a small oil lamp called a ‘crot’ which has a similar appearance to the molds in which the cheeses are made.

This cheese can only be called a ‘crottin de Chavignol’ if it has an AOC, a regional label to prove its quality, similar to an ‘appellation controlée’ on wine.

More than 20 million ‘Chavignol’ are produced every year from 14 million litres of milk provided by 33,000 goats!

The chavignon is a full fat cheese, small and cylindrical with a fine, light coloured skin or ‘croute’.

The actual cheese should be white or ivory colour, aging into yellow, depending on the specific cheese and its maturity. It is one of the few cheeses that can be eaten and appreciated throughout the different stages of its maturity.

It can be eaten cold straight out of its mold when it should have a nutty and creamy flavour. (frais) After six weeks, when it has hardened, the flavour is stronger. (demi-sec). After that, the cheese becomes crumbly and dry with a very specific ‘goaty’ taste (sec)

This cheese from Poitou was named after the Arab word for goat, Chebli .

This is a cheese which developes in flavour the older it gets. It has a soft, white centre, which is not pressed, and a thin rind or skin.

It is characterized by its distinctive shape. Each cheese is approximately 6cm high, cone-shaped, with a 4cm base and a 3cm top, weighs 100 to 150 grammes and has a minimum fat content of 45%.

It is made in Haut-Poitou (Upper Poitou), Vienne, Deux Sevres and Charente. The cheese is ‘goaty’ in flavour and smell. The paste is firm and white and the rind is pale blue-grey in colour.

Chabichou can be eaten fresh or matured for four weeks in a cool and humid cellar, during which time the blue-grey rind develops.

Le pouligny saint Pierre is easily recognisable by its pyramid or cone shape similar to le valençay and is fondly known as the pyramid or the eiffel tower.

The home of Pouligny Saint-Pierre is the Vallée de la Brenne in the centre of France which has the advantage of a climate which is mild in the Winter, providing rich vegetation for the local goats to graze on.

This richness is evident in the cheese. It has a smooth goat’s milk taste, slightly sour, slightly salty, slightly sweet with a nutty aroma.

In the middle ages, the inhabitants of the small village of Banon in the Hautes Alpes used to conserve surplus cheese to use during the Winter months when the goats were not producing milk, by covering it with horse chestnut leaves.

This tradition has continued in presentation and the cheese that you now buy in the shops is wrapped in chestnut leaves and tied with natural raffia, after having been dipped in ‘eau-de-vie’ (alcohol) to avoid bad mould. The cheese is made from raw milk.

It is first ripened for 4 to 6 days before being wrapped in the chestnut leaves. It is then let to ripen again for 5 to 15 days.

Banon is a mild soft cheese with a nutty flavour and a firm supple texture. As it ripens, the surface of the cheese takes on the colour and the aroma of the leaf.

Because of its attractive presentation, Banon makes a colourful addition to any cheese board. In the same ‘family’ of goat’s cheese tastes, you can also find le cabécou du Périgord , with a subtle nut flavour, and le rocamadour .

Rocamadour is small and round and made with raw goat’s milk. Its rind is thin and its paste soft and creamy, with a subtle scent and taste of hazelnuts. The appearance of the rind varies depending on the maturing period which may not exceed six weeks.

Produced in the Ardèche and Drome, this cheese is matured through a special process called ‘dieulefit’, washed in eau de vie (alcohol) and wrapped in vine leaves before being placed in earthenware pots.

In taste, it is slightly spicy, hence the name which means ‘spicy’ in Langue d’Oc. Round with a natural rind that ranges in color from pale ivory to soft, white or pale blue-gray, the cheese becomes hard and brittle as it ripens.

This cheese might be packed with herbs in jars of local olive oil. Picodon cheeses are very similar to the Pelardon cheeses of the Languedoc region which have a herby taste, due to the brushland where the goats graze