I thought it would be interesting to those of us who are occasional users of spas or consumers of mineral water to translate into English part of a paper written by the then Professor of Medicine at Montpellier and a very distinguished scientist indeed. 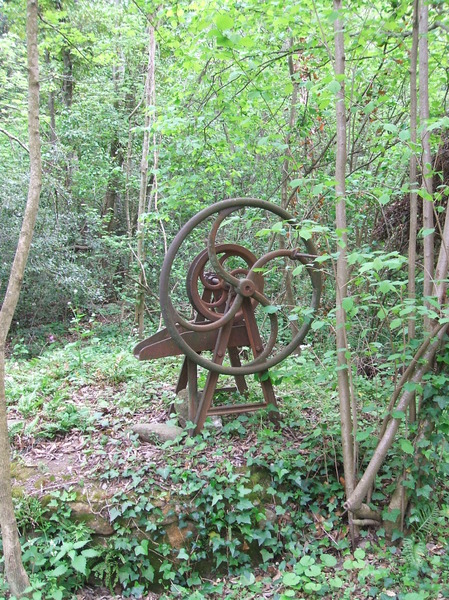 I also rather feel that the mairies of Laroque and Sorède are missing a touristic trick in not exploiting this little-known resource to the full. All infelicities of expression are mine, as are all omissions, gaffes, solecisms and tomfoolery.

South-East of the village of Sorède several branches of the same mineral spring emerge in the bed of the river. The water leaves an ochre deposit and the fact that it bubbles shows that it is acidic, ferruginous and carbonated. Its popular name, the Sour Spring, reflects its most obvious characteristic.

When the river is full in Winter,the waters mix with the waters of the mineral spring and cover its traces. In Summer, on the other hand, the mineral water appears in the form of several small pools which bubble abundantly and leave an earthy, yellow sediment and a film on the water which has a metallic appearance.

In the place where the spring rises, the river flows through a deep ravine. The left, or western bank is very steep and formed of granitic boulders. The opposite bank shelves more gradually. A deep hole exists in the western slope and is noted for its mephitic character. Animals which seek shelter there during storms are easily suffocated.

( Translator’s note: Jerôme Margail, in his excellent Sureda Fa Temps has an anecdote about being warned never to venture into the cave and being shown the dead birds which littered its floor.)

This cave, which is called Cobé de la Mène or Cave of the Mine is very similar to the cave of the Dog in Pozzuoli. The causes of the gas are the same in both. The carbonic acid gas which is so plentiful in the surroundings leaks into the interior through underground passages during calm weather and makes the air dangerous for living creatures which enter there. 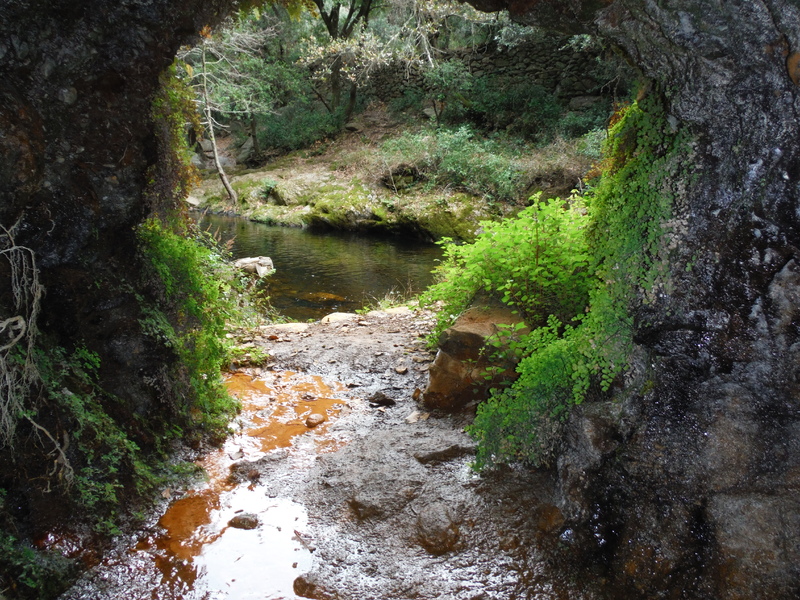 The Sorède mineral spring has begun to be very popular. The good effects it produces and the beauty of the area seem to guarantee a real success.

The village of Laroque des Albères is only a short distance west of Sorède. A spring of carbonated, iron-rich water flows in the neighbourhood, where they call it the Spring of Aram, or Copper Spring, no doubt alluding to the strong, metallic flavour which the water has.

Far from being a unique spring, the mineral water comes out of the earth or out of the mountain by a number of paths which form individual springs whose identical chemical structure I have ben able to confirm.

A short distance south of the village and even in the bed of the Laroque river there are mineral springs. The most important of these, whose position makes access and use more easy, spurts from the rock on the left bank of the river about two metres above it. As for the other flows of mineral water which multiply over a distance of two hundred paces, it is clear that they all have one and the same origin.

Like the waters of Sorède, those of Laroque belong to the undeveloped land. Some of the local inhabitants come every year to use these mineral springs which only need less competition to get a reputation which their nature seems to merit.

The water of the Aram Spring is clear, bubbly and odourless with a slightly sour flavour. It is at a temperature of 15.62° C when the air is 20°C, giving off spontaneously gassy bubbles and leaving an abundant yellow-ochre sediment.

I also wanted to to establish whether the Sorède water was the same as the iron-charged spring of Laroque, which is so close geographically. Strong similarities exist between the waters of Sorède and those of Le Boulou and St. Martin de Fennouilla. Clearly, the waters of St. Martin and Le Boulou are richer than that of Sorède which is in turn richer than that of Laroque. The latter has less fixed material in it, which might make it more suitable for certain purposes.