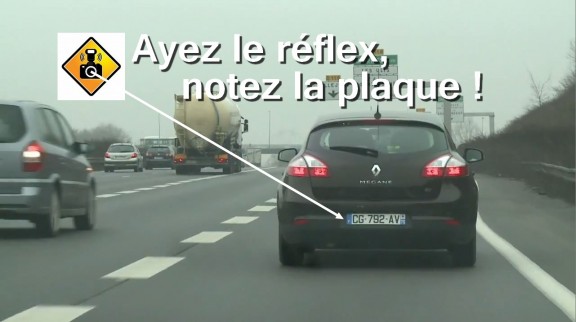 Fixed speed cameras are on the decline, believed to be less efficient than  mobile ones (radars mobiles de nouvelle génération) which are on the increase, as France makes plans to double mobile speed traps throughout 2014.

Last year, more than 300,000 fines (amendes) were handed out, generated by undercover gendarmes in unmarked  vehicles (voitures banalisées). Black Audi S4’s seem to be popular for this, with cameras fitted in front, back, and side, and Peugeot 208s or unmarked Renault Meganes with radar speed detectors hidden behind the number plate.

The Ministry of Interior statistics show that over a third of drivers flashed last year did not actually receive their fines, or successfully appealed against them, due to the poor quality of photos making it difficult to read the plates. However, this new breed of mobile camera takes a clear photo, so the days of getting away with it are numbered!

One suggestion, as seen in the photo at the top of the page, is to note down number plates of the  unmarked mobile camera cars in your region, share them on social media sites, and avoid getting nicked – although if you’re going slowly enough to see the number plate in the first place, you’re probably not over the limit!