“Last year, approximately 15,000 visitors passed through our former office,” said Sabrina Rey, Director of the Office. “This year, we are expecting even higher numbers. It was clear to us that we needed more space so that we can fully meet the needs of our valued visitors.”

Number 5 Rue Saint Ferreol, the new address, formerly housed the Hotel Garreta, one of many temporary abodes for the wave of early 20th century artists who came to be inspired by Ceret’s beauty and each other. The hotel eventually closed and was abandoned until 2011 when the town purchased the property. The first order of business was to create six social housing apartments on the upper three levels of the building. Work began on the ground-floor tourist office in January of this year.

As is the case for all buildings within the town’s historic district, the historic façade of the building has been retained. Inside, the new high-ceiling space is bright, roomy, and sleek, about four times the size of the former office. 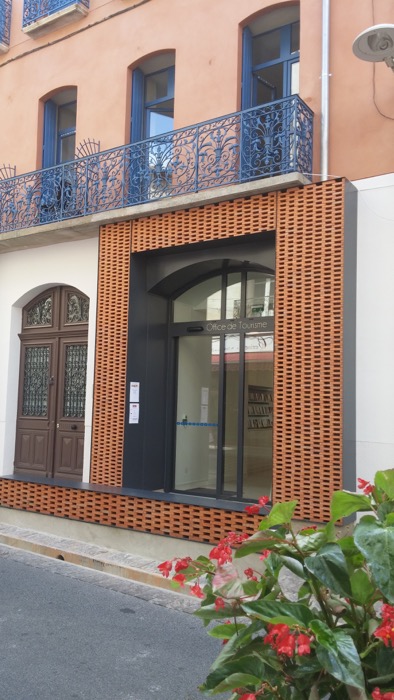 Just inside the door on the right is a screen displaying activities on tap in Ceret during the current month. A few steps further along, next to a window displaying items for sale such as a video about the history of Ceret’s cherry orchards, is the information desk. Waiting behind the desk to answer questions are staff whose combined language capabilities include French, Catalan, Spanish, English, and German.

Pamphlets, brochures, and magazines line shelves on both sides of the room. Seating is available for visitors to peruse the material or watch videos about what Ceret has to offer. For those who like to pursue their research electronically, tablets are provided for tourists to learn more about Ceret or investigate other services around town including food, lodging, and car and bicycle hire. Wifi installation is scheduled for later this month.

One of the handiest new services to be offered is a cellphone charging station. Here, a visitor can open up one of the charging units after creating a security code, plug in their phone, lock the unit, go off to lunch or shopping, and return later to retrieve their fully charged phone and get on with their visit.

As for the former office location on Avenue Clemenceau, town officials are still in the process of deciding upon the building’s new function. The cozy but welcoming space made its debut in 1956, ably carrying out its job over the past 60 years.

To reach the new office on foot from the Musee d’Art Moderne, turn right out of the museum and make another right turn just past the Grand Café and the office is a short hop down Rue Ferreol on your left. Opening hours remain as before and can be found on the town’s website, which currently is being translated into English. Parking is available at Les Tins, the municipal parking lot.

The official opening ceremony is scheduled for September, with more details to be released soon.