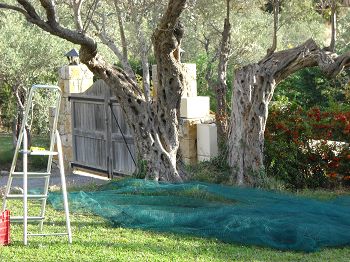 In response to a call from my sister two weeks ago, we headed off to the Var, to assist in olive picking.

She and her husband have 32 olive trees scattered around 4 terraces, high up in the local hills, and in previous years had share-cropped with a neighbour, who pruned and picked the olives, and gave them a share of the resulting oil.

However, he had retired and last year the olives had gone to waste. This year was going to be different – all their friends had nagged them about the olive crop.

Some had sung the virtues of one’s own olive oil, others had pointed to the mess made when olives scattered all over the terraces, and the most pertinent friend had offered her olive-picking kit.

This was too good an offer to sniff at, and so G drove off and came back with large sheets of green netting, two mysterious yellow rakes, and a “gadget”.

This consisted of four long prongs on a rotating base, which had a long supporting pole, and clips for connecting to a car battery.

This meant that we had to have a charged battery, so G mounted on his little tractor and mowed the terraces. It was good to have done this, as it made collecting olives from the ground a lot simpler. G had also obtained 6 crates, which we hoped to fill. 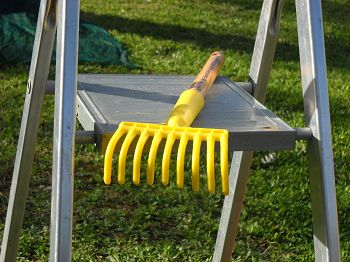 With the grass mown, we laid out the nets, found a few sets of steps, armed ourselves with the little rakes and began the task.

J and I being short were relegated to ground duties, while G and my husband mounted the ladders.

Techniques varied: the olive combs (peignes d’olive, the name stamped on the little yellow rakes) proved useful, for attacking branches within reach but if I wanted to use one again I would get a child’s beach rake for a lot less money – however these were on loan.

I soon got a normal rake from the garage, and began raking higher up. As the olives fell to earth, some fell on the nets but as many landed on the grass or on the paths, so the ground-level workers were kept very busy, collecting them up and adding them to the crates.

It was easy to tilt the nets and roll the other olives into the crates but it took some effort to pick up the olives which fell on the grass or into the base of the olive trees, particularly when we were picking from more trees than we had nets. It was also quite strange being bombarded by olives as one tried to gather them.

However, the trees were all different. Some had lovely fat juicy black olives, others had tiny black bullets, some were green and red, some came off easily, some were very resistant, and so we had to adapt our techniques in a number of ways.

It was hard to tell why they varied: was it because they were on better drained ground, or had more sun, or was it a question of how they had been pruned?

Obviously there were several different varieties, as the leaves differed from tree to tree – but who could tell what they were?

All the trees had in common was they were old, with wonderfully gnarled trunks and in some cases, new trunks rising up from old root stocks.

J told me that some of the smaller trees in the garden had seeded from the old trees and that she had observed that they did not fruit or fruited very poorly and indeed when one looked closely, one could see that the fruiting trees were grown grafted on root stocks.

It seemed strange to reflect that perhaps two or three hundred years earlier, some Provençal farmer had been practising the same grafting techniques we use nowadays.

We did not have the 2009 lunar calendar (which the Provençal farmer would have used), to find out if we were picking at the right time but we thought it was better to get them by hook or by crook (or by rake and by gadget) than to leave them to waste. 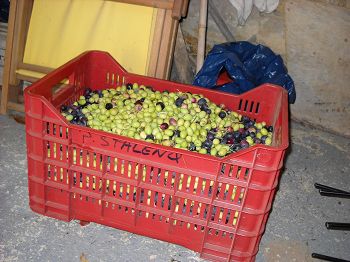 Gradually we got more accustomed to the techniques and J and I tried working on the ladders.

The “gadget” came into play and proved a real boys’ toy but was a bit too heavy and awkward for J and me.

However olives poured down from the higher branches, which had already yielded a lot to the rakes.

We toiled for three days (or parts thereof) breaking off to go to market, eat in little country restaurants, and watch the weekend’s rugby. (In this we are all true citizens of the Midi – and G told us where, by watching the regional UK stations, we could see matches which were not being shown on mainstream – and Ireland and Scotland both won, so that was good.)

The tally of full crates of olives gradually mounted, as we enjoyed the beautiful sunny weather, and eating outside was just possible as we watched the gliders released above us circling down to the valley. This was a good way to spend a weekend of Indian summer and we made the most of it.

When we had to leave to return home, there were three crates, or 75 kilos, of olives already picked.

A few days later we got a phone call – they had not quite reached the target of 100kg supposed to be necessary to have an individual batch pressed, but the mill had processed their 93.6kg, which had produced 16.6 litres of home-grown oil.

This was an excellent result – but the whole process does not tempt me to grow more than our one olive tree, which provides gentle shade in the back garden, and last year gave us 3 large jars of pickled olives.

We are looking forward to receiving our litre of oil, when next we see J & G. It will be cherished and used for special occasions – if it is as good as it should be.