Out for the day in Elne

A ten minute drive from Palau del Vidre brings you to the ancient historical capital of Roussillon, Elne, so named in the fourth century when the Christian emperor Constantine changed its Roman name, Illiberis, to Elne, in honour of his mother Helena.

Carthaginian commander, Hannibal, stopped off at Elne to discuss a treaty which would allow his army free passage when they marched from Iberia over the Pyrenees and the Alps into northern Italy. The treaty allowed safe passage through the Panissars (Le Perthus) pass with 80,000 soldiers, 10,000 cavalrymen and 40 elephants. War elephants were trained to charge the enemy, trampling them and breaking their ranks!

Head for the upper part of the town and park near the tourist office in place Sant Jordi. Wander the well-signed circuit of the ramparts, or the cobbled, oleander-lined alleys full of small galleries and workshops, to the huge Cathedral consecrated in 1069, with fine Croix des Outrages, magnificent marble font and superb view from the terrace.

Its peaceful cloisters, containing a Museum of History and Archaeology, are made of blue Céret marble and are classed amongst the most beautiful in France, its gardens sweet with traditional herbs and medicinal plants. 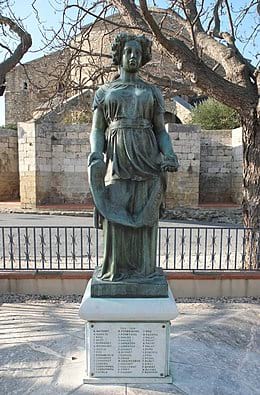 Look out too for Maillol’s sculpture and war memorial, ‘Pomone’, a clothed version of the naked original, and Violet’s large terracotta bas-relief depicting scenes of everyday agricultural Catalan life, set into the ramparts of the Cami de la Réal, where the Wednesday market is held.

Across  the way, the Musée Terrus has a permanent exhibition of Elne-born Etienne Terrus, contemporary of Matisse and Derrain and best known for his local landscapes, as well as interesting shows of artists with Elne connections. Well worth a visit!

Just nearby, take time out for pure pleasure chez New Kids on the Block, gourmet chocolate-makers Clarencia & Pierre or pop in to see the lovely creations for sale from Véronique Puig, potter, in her small workshop. You can also sign up for pottery, painting and photography lessons or workshops.

The Maternité Suisse in Château d’en Bardou, is also worth a visit. This moving memorial is to young Swiss nurse, Elisabeth Eidenbenz, who rescued pregnant women from the misery of the internment camps of Argelès, Rivesaltes, Barcarès and St Cyprien. She saved the lives of almost 600 babies before being closed down by the Germans in 1944.

As you leave Elne, direction Argelès, you can’t miss the large blue butterfly sign for the Tropique du Papillon, butterfly paradise, filled with exotic plants, tropical flowers, a caterpillar nursery and hundreds of delicate butterflies from all over the world.

At its entrance, do try the cosy, new restaurant ‘Saperlipopette’ offering traditional, local fare as well as a selection of organic and natural wines. It was already gaining a reputation for good, simple, well-crafted food before Covid hit.

With murmuring fountains just next door, a greenhouse garden of bananas, lotus, hibiscus and the magnificent colours of the softly fluttering butterflies, this is a gentle oasis of peace and beauty. The perfect final activity when you’ve been out for the day. 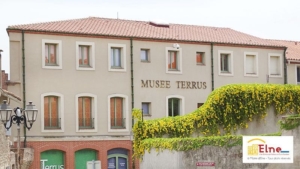 The Terrus museum in Elne, dedicated to painter Étienne Terrus, was in shock recently, after a visiting art historian pointed out that more than half the museum’s collection are fakes.

Staff at the museum were unaware that 82 works originally attributed to the artist were not actually his! In fact, out of the 140 paintings and water colours collected over two decades by the museum, more than half the collection is now thought to be fake.

One painting included a castle tower that had been built in the late 1950s… but Étienne Terrus died in 1922! The museum admitted that, on close scrutiny, some of the fakes were “rather obvious.”

All paintings exhibited now are the real thing, and police have launched an inquiry into the fraud.