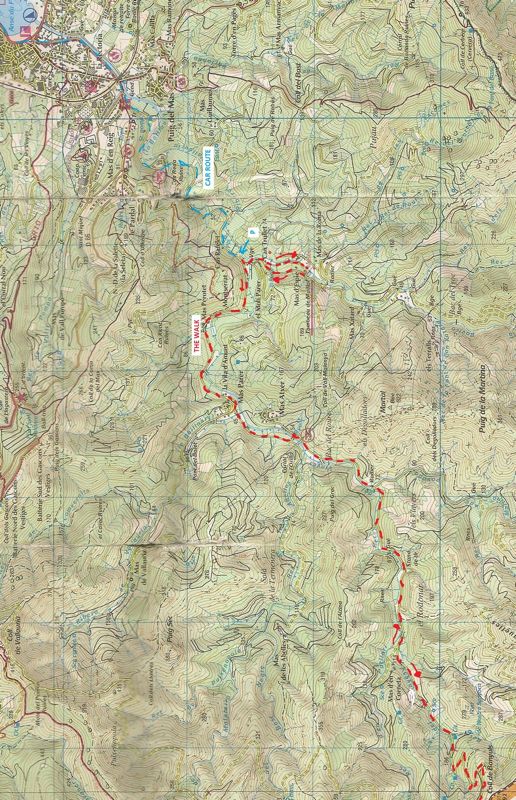 This walk concentrates on the deep valleys behind the sea-side wine producing town of Banyuls-sur-Mer and in particular on the countryside that inspired the renowned artist and sculptor Aristide Maillol, (who curiously is virtually unknown in English speaking countries). 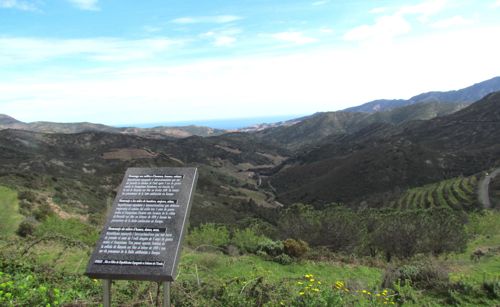 The Col de Banyuls looking back into France

It starts at Maillol’s tomb and museum and proceeds up the valley to the ridge between France & Spain known as the Col of Banyuls, which has unrecognised modern historical significance, being an escape route during the 1930s and 1940s in both directions.

The climb is on tarmac roads and at first is gentle but quite steep for the last few hundred metres to the col. At the top the views over Spain and back towards Banyuls are magnificent.

SUITABLE FOR PUSH CHAIR: THE LAST BIT IS STEEP THOUGH. 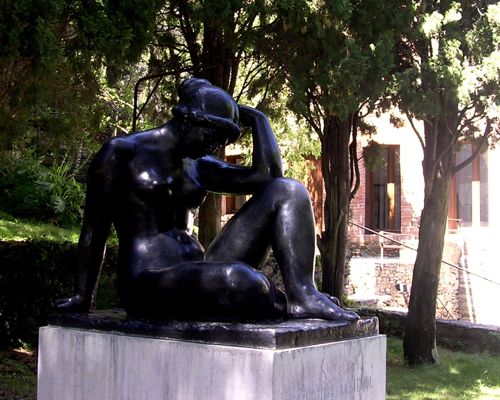 The journey to Banyuls-sur-Mer is best done by car. It is possible to travel by bus which drops one at the centre of the town, (or by train to the gare) which extends the walk to the starting point by about 3.5km in each direction, although the going is not hard on level roads.  Add an hour to the journey.

Follow the map along the dotted blue route from the sea front in Banyuls-sur-Mer taking care along the winding narrow road that leads to the Musée de Maillol; (it is clearly signed) and then park the car in the car park provided and follow the signs for the museum on foot (leaving the car park to the left).

A winding track with herbal edges follows a mountain stream in winter and a dried pebble ditch in summer to a gate which heralds the secluded and shaded garden of the Maillol Museum. This shrine to Aristide Maillol (1861-1944),  a child of Banyuls, is one of the most serene, beautiful and personable situations in this part of the region and is dedicated to the works of a contemporary sculptor of Rodin whose fame is rapidly growing around the world. 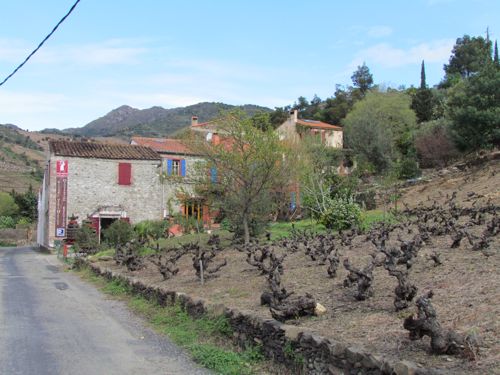 Perhaps his most famous collection of works that are accessible to the public is the many bronzes that adorn Les Jardins de Tuilleries in the Louvre in Paris. In the centre of the garden and demanding closer scrutiny is La Mediterrannée, which is set on the spot where Maillol used to stand his models as he sketched and prepared for sculptures.  One of his favourite models, Dina Vierney, helped start the foundation that supports a museum of his works in Paris.

The museum  is run by one of his great grandsons and well worth half an hour and the cost of a ticket; it is small & concentrated with  displays of Maillol’s best works as well as an insight into his life.

The relevance of this museum  has poignant significance when it is considered that Maillol and Dina Vierney were integral links in the exchange of refugees who escaped over the frontier into Spain during the German occupation.  It is ironic Maillol was tragically killed in a motor accident in 1944 on the outskirts of Banyuls when he and a passenger  skidded off the road whilst visiting an artist friend.

Leave the Museum by climbing the few steps from the garden to the road, turn right and back down to the junction by the car park where a left turn is taken past the Forge. The valleys of the River Baillaury and Vinyes have steep sides of vines seemingly to grow out of the very schistous rock in the most inaccessible impossible positions. Harvesting grapes here cannot be harder anywhere in this world . Very soon on this winding quiet valley road, a collection of old farm buildings appear on both sides of the road.

This group of vernacular buildings (Mas Parotet) make up the Domaine of Berta-Maillol and the estate is owned by more descendants of Maillol. Tasting and purchases are welcome here but it is suggested that a dégustation is taken on the return journey if the Col de Banyuls is to be reached! 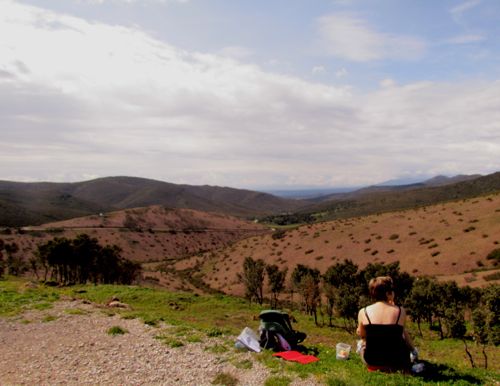 The road winds up the shallow valley to the hamlet of Mas Parer and after the collection of farm buildings there is a bifurcation in the road where the River Baillaury joins the Vinya; keep left and continue towards Mas Axter and in 500 metres, cross another bridge to the left but immediately take the right fork. This valley is a haven of wild flowers, butterflies and birds, from kestrels to buzzards to finches to hoopoes.

With the small compact hamlet of Mas Axter behind, the valley narrows and the metalled road steepens and the countryside becomes wilder. Previously, this turned into a rough track with limited vehicular access but it is now tarmac surface which has brought heavier rat-run traffic between Spain and France. It is sobering thought that this was the route taken by the escapees; we find it a steep climb to the Col but as a refugee this must have been a daunting prospect also trying to avoid border guards.

As well as the recognised wartime activities of Arisistide Maillol and Dina Vierney there was another lady whose involvement is little known; she was Lisa Fittko, (1909-2005) an Austrian who also helped many escapees and who lived her latter years in Chicago.

These valleys are full of romantic names of the domains: Mas de Baillaury, Mas des Abeilles, Mas Parotet, Mas Parer and many of them are still used today on the labels of the AOC Collioure and Banyuls wines produced by the wine cooperative of Banyuls today.

The last two kilometres are steep and offer no cover if the sun is strong but this dramatic climb enables wonderful views out over both Spain and back into France with Banyuls-sur-Mer being visible in the distance.

The commemorative plaques that stand at the point recall the plight and bravery of those in the two relevant wars of the Spanish and World War II who came along this route. The Col de Banyuls is a crossroads of Grandes Randonnées with another one climbing each way along the frontier. This is now the end of the exploration and unfortunately, the return journey is achieved by retracing one’s steps, but the benefit of this is the ability to appreciate the view that had been behind on the ascent. It is also much quicker!