Shepherd’s Prayer, the new novel by Katja Willemsen, is set in the scenic hills behind Collioure  –  anyone who has visited the area, and enjoys its brooding history, will love this book.

From the very first sentence the story has heat and tension.

Having run from a marriage proposal in London to the history-steeped Pyrenees, Raisin Radcliffe is visited by her estranged brother, Geoffrey. ,

They befriend a grizzled Catalan shepherd, Henri Arana, and help him save an emaciated wolf with a strange circular insignia branded on its haunch. ‘Protect the vulnerable’ is the old man’s credo.

Hiking between the craggy oaks above the village, they find an ancient dolmen and Raisin is drawn into the caves below by visions of a mysterious tribeswoman.

As Raisin and Geoffrey explore the labyrinthine caves, so the secrets of their traumatic childhood begin to unravel before them, with shocking consequences.

Raisin is plagued by questions about her brother’s strange and violent reactions, and the kidnapping of a village boy leads to the two of them being captured by a violent cult.

Katja teases her reader skilfully and as one mystery is solved, another one is created. 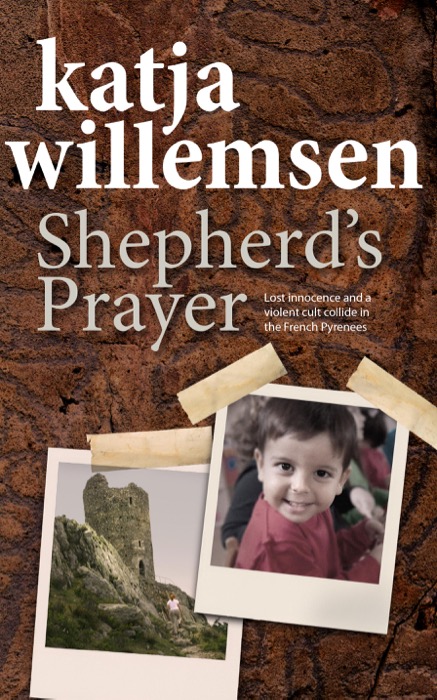 There are so many ways to enjoy this book.

Many of the locations are real and can be explored.

If you’re interested in the effects a disturbed childhood can have on adult relationships, or if you just want a good thriller for the summer, which twists and turns like the mountain paths of the story, then this is the book for you.

I thoroughly enjoyed Shepherd’s Prayer, and would recommend it to anyone.

As for myself, I’m hoping Raisin and Geoffrey Radcliffe continue their journey of self discovery during another adventure soon.

CLICK HERE TO READ CHAPTER ONE OF SHEPHERD’S PRAYER

A CHAT WITH THE AUTHOR

Where are you from?

I was born in Holland, grew up in South Africa, and now live in a tiny Pyrenean village in France, with my husband, Dave, and our three cats: Espresso, Vespa and the new arrival, hell-kitten Pixie. I look Dutch, feel South African, and have sturdy tap roots in this little French hamlet.

Did you always want to write?

Definitely not. I wasn’t born with visions of book deals whirling in my head. My eighth grade English teacher, Veronica Wallace, opened my eyes to the world of words and books, and I devoured books all my life but I never expected to write one.

Was there life before writing?

Yes and No. My “other life” in three words? Stress. Soulless. Exhaustion. My writing life? Passion. Perseverance. Electrifying.

What do I write about?

My themes involve family secrets, psychological shadows, and the supernatural, wrapped around loaded topics – betrayal, schizophrenia, death of a child, sexual abuse. My goal is to create page turners that can be enjoyed as a light summer read, but there’s thought-provoking psychological depth lay behind.

My next book is already bubbling…. I want to portray the horror of the Spanish retreat from Franco before the start of World War II. Simple folk, women and tiny tots, their pets, desperate to escape this brutal dictator by scrambling over the Pyrenees during an icy January in 1939, only to be herded into inhumane concentration camps by the French.